I did not wet myself when Dr M turned up, analyst chides critics

GE14 | Political analyst Kamarul Zaman Yusoff has hit back at those who claimed he was intimidated by Dr Mahathir Mohamad, who made an unexpected appearance at a forum in Shah Alam, where he was one of the panellists discussing if the former premier is too old to be the head of government again.

Kamarul Zaman claimed that it was Mahathir who should have been braver.

"There are widespread allegations on social media accompanied by photos which portrayed me as being meek by his side, as though I had peed myself in fear as soon as Mahathir arrived at the forum. This is untrue.

"Mahathir's attempt to show his courage by challenging me to criticise him to his face on social media is amusing, because if he was really brave he should have answered Sinar Harian's invitation to be part of the forum from its onset as a panellist, not appear halfway...

"I had hoped for a question from the audience that would have allowed me to criticise Mahathir to his face; unfortunately, the opportunity for the audience to speak was closed in a manner that I was told was unfair," he added in a Facebook posting this morning.

The Universiti Utara Malaysia (UUM) professor also pointed out he had told Mahathir that spiritually, the latter was not fit to be prime minister, as per Quranic verses which state the frailty of men in their old age.

He also asked if Mahathir could lead effectively the DAP dominated Pakatan Harapan, and why he was willing to be prime minister again despite previously backing Bersatu president Muhyiddin Yassin for the job. 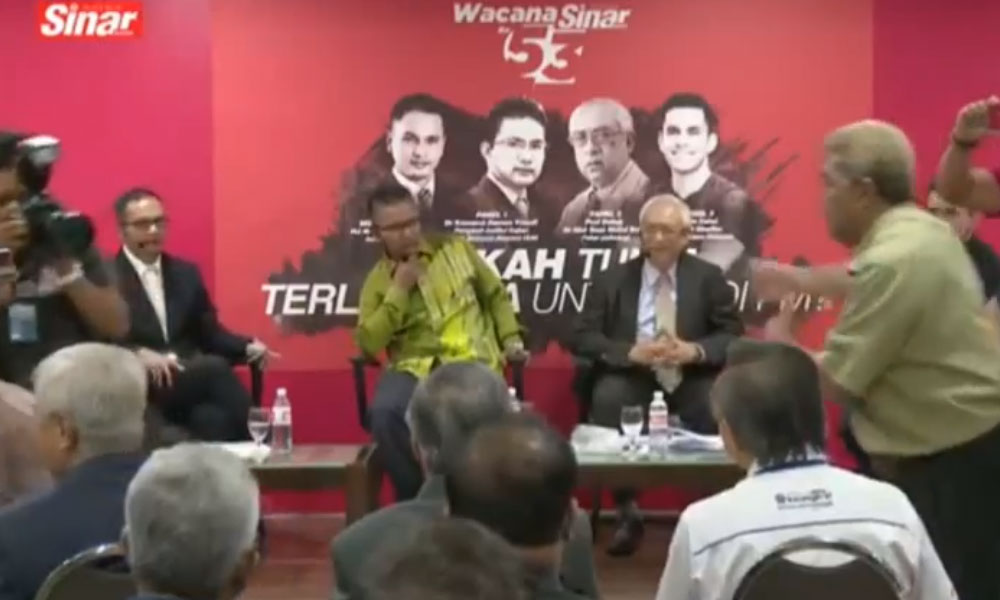 Kamarul Zaman was one of three panellists at yesterday's forum organised by Malay daily Sinar Harian. The other two panellists were a fitness guru and a psychologist.

Midway through the forum, Mahathir gatecrashed the Shah Alam event and in a Twitter posting said, “I am here guys. Say it to my face.”

Before Mahathir arrived, Kamarul Zaman had cited 10 criteria for a person to be the prime minister, and claimed that Mahathir only satisfied two - the legal and intellectual criteria.

In his posting today, the professor accused Mahathir of being hypocritical about the state of his health.

"I was shocked by Mahathir's hypocrisy, giving a positive image of his health to the public, but during the meal after the event ended, I heard him complain about his tight ceramah schedule and how he was forced to wait till late at night because he was always put as the last speaker and so on," he said.

As for those mocking him on social media, Kamarul Zaman responded with the Malay idiom "ada ubi ada batas", which means that bad deeds will be paid in kind.