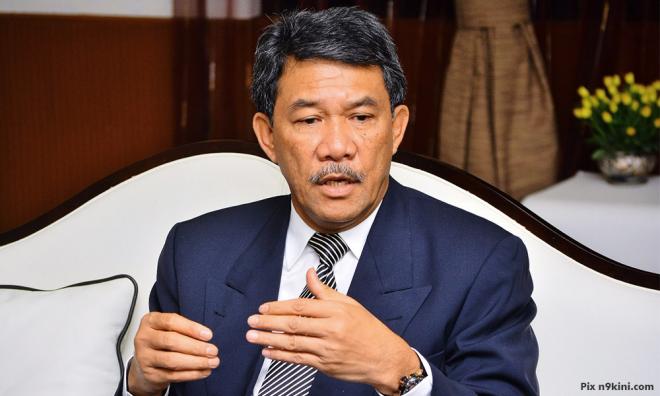 MB's oceanographic finding - Dr M will cause a ripple, not 'Malay tsunami'

Dr Mahathir Mohamad has positioned his party Bersatu as an alternative to Umno and his nomination as Pakatan Harapan's prime minister candidate has filled a void left behind by Anwar Ibrahim and PAS with regard to roping in Malay votes.

Based on this, Harapan is banking on the 93-year-old former prime minister to generate a tsunami among the Malay electorate, which would crush Umno and BN.

However, Negeri Sembilan Menteri Besar Mohamad Hasan is not convinced that a tidal wave is inbound during the coming general election.

According to Mohamad, Mahathir might have a slight impact on the voting trend and nothing more.

“I am not saying that there will be no effect. There will be a slight impact but not what some people term as a Malay tsunami … that will not happen,” he said in a special interview with Bernama.

Mohamad, who is also the state's Umno and BN chairperson, said he could not accept that Mahathir was willing to work with the opposition, particularly DAP, which he abhorred in the past.

“I respect Mahathir. I have worked with him. However, since his association with DAP, I think it's quite difficult for the Malays to support him.

“There is one thing… over the last 30, 40 years or so, he has stated that DAP is a racist party. Today, how come he and (DAP veteran Lim) Kit Siang are such good friends?

“DAP has become good. I cannot accept that. I am not angry at Mahathir, but his politics is harming the nation,” Mohamad added.

The Rantau assemblyperson said the Malays have matured in their thinking and could judge whether Mahathir was doing good or otherwise for the nation.

“People even in the villages have lost their respect for him. In the surau, elders who rarely talk about politics ask me what has become of Mahathir.

“It has come to that stage (of people disagreeing with what Mahathir is doing),” he added.

DAP leaders have repeatedly cried foul over Umno branding them as a threat to the special position of the Malays and Islam.