Following is a list of FAQ (Frequently Asked Questions) and answers on the Anti-Fake News Bill 2018 issued today by the office of the Minister in the Prime Minister’s Department Azalina Othman Said.

Azalina tabled the Bill for first reading in the Dewan Rakyat today.

What is the reason for the government to introduce this new legislation considering there are several existing laws to curb the circulation of fake news?

The circulation of fake news is an issue of global concern arising from the rapid and intensive growth of the communication technology revolution.

Lately, Malaysia has always faced various challenges as a result of the circulation of fake news which not only confuses the people but also threatens the security, economy, prosperity and well-being of the people and country.

Hence, a new approach through the introduction of a new bill becomes extremely critical.

In fact, several countries have begun to realise that the circulation of fake news is a huge global threat to the information world that has to be addressed effectively and promptly.

For example, in Singapore, a Select Committee on Deliberate Online Falsehoods: Causes, Consequences and Counter Measures has been set up to examine the problem of fake news, the types of perpetrators and their motives in circulating fake news and trace the disseminators of the fake news.

This includes the possibility of introducing a new law to curb the circulation of fake news.

The Philippines has also drafted a special bill to address the circulation of fake news, namely the Anti-Fake News Bill 2017, which makes it an offence for anyone to offer, publish, distribute or disseminate fake news.

Hence, it should be understood that though there are several relevant laws, the problem has yet to be controlled effectively up to now due to the rapid and complex development of information technology.

What more when the laws often mentioned in relation to the matter, such as the Penal Code, Printing Presses and Publications Act 1984 and the Communications and Multimedia Act 1998 are unable to cope with the complex nature of the offences in line with the latest technology.

In this connection, new elements will be introduced in this bill. The proposed new elements include the provision of extraterritorial applications with the intention to show the seriousness of the government in addressing the circulation of fake news by any person outside Malaysia.

In addition to clear definitions, explanations or illustrations on the meaning of “fake news”, the bill also makes it an offence for anyone to extend financial aid for the purpose of circulating fake news, and an offence if the individual does not eliminate any publication/broadcast of fake news and such. 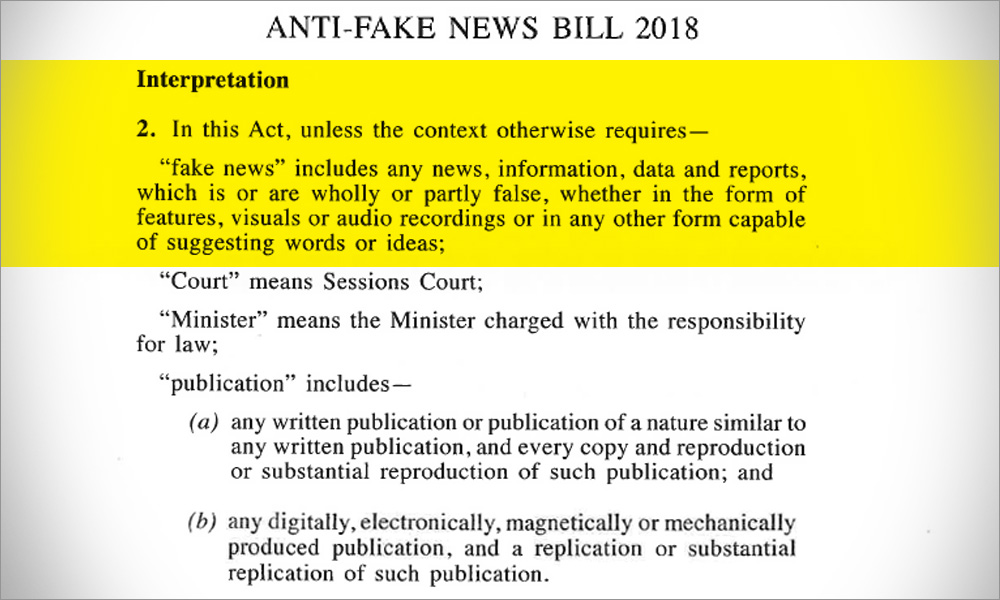 At the same time, the bill provides interim measures to check the dissemination of fake news when a case is under investigation and prosecution.

Is the definition of “fake news” in the bill of a general or specific nature?

The government has taken the initiative to provide a clear and specific definition of “fake news” in the bill including several illustrations to show the situations when the occurrence of fake news takes place.

This bill defines “fake news” as any news, information, data and reports which, in part or wholly, are false, whether in the form of features, visuals or audio recordings or any other form that can portray words or ideas.

It should be emphasised that there is no law now related to the dissemination of fake news that provides a specific definition of “fake news”.

In this context, who will determine whether a piece of news or information is incorrect or otherwise?

In this respect, the government has decided to leave it to a neutral and fair party, that is the courts, to determine whether a piece of news or information is incorrect or otherwise. That is, by the due process of law.

The courts will be empowered to issue an order for the elimination of any publication containing incorrect news. 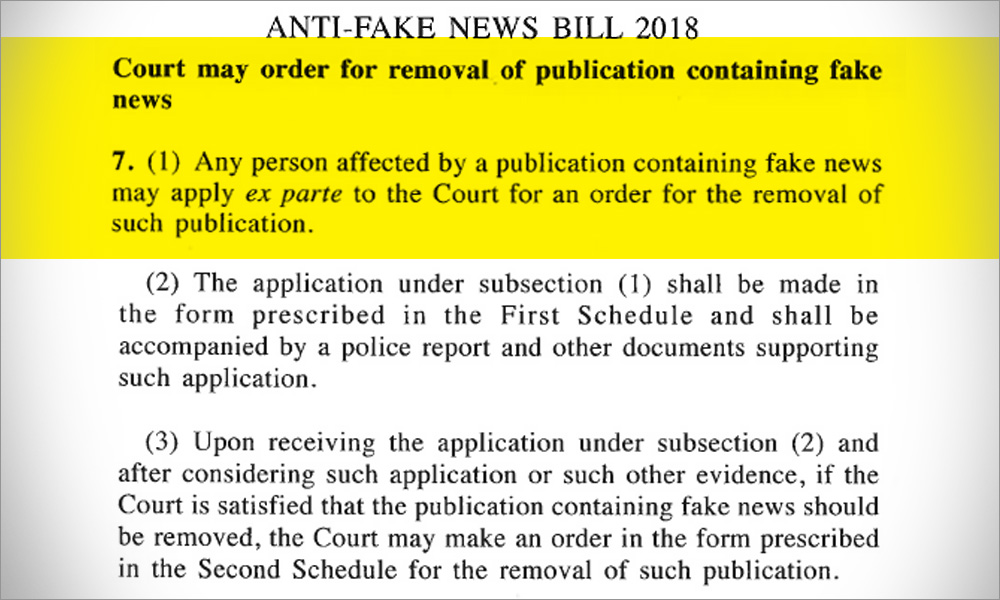 4. There is a claim that the bill will restrict the freedom of speech. What is the government view on this matter?

That is a baseless allegation and purely politically motivated. No law drafted and approved by Parliament is aimed at restricting the freedom of speech and expression enshrined in the Federal Constitution.

In fact, under the leadership of the prime minister, the government has successfully implemented the legal transformation such as by way of the abolition of the Internal Security Act 1960 or ISA and introduced the Peaceful Assembly Act 2012 which nourishes the people’s right to expression in the country.

The bill was drafted in accordance with the power of attorney as provided for in Paragraph (a) Clause 2, Article 10 of the Federal Constitution.

The proposed bill is aimed at protecting the public from the dumping of fake news and, at the same time, ensuring that their right to speech and expression under the Federal Constitution is respected.

5. Will this bill provide for heavier penalties?

The bill is of a deterrent nature, to give a clear message that each individual should be responsible for the sharing of true and healthy information. 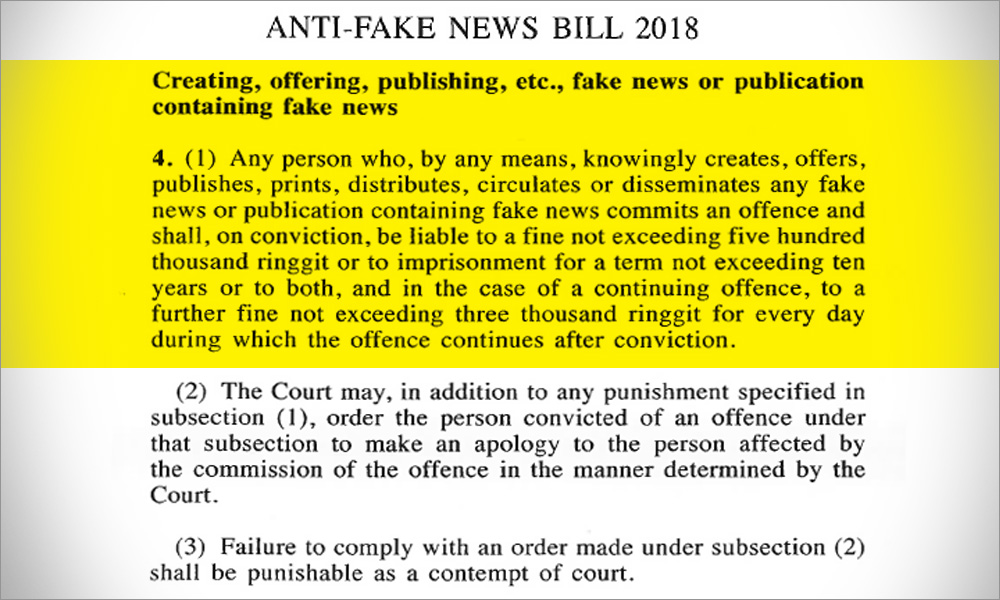 Those found guilty of circulating fake news can be fined or jailed, or subjected to both penalties.

In addition, the court can also order those found guilty to make an open apology to the affected party.

At the same time, the bill will also give a clear message that the government will not compromise in the matter of dissemination of fake news that can undermine public order or national security, and will continue to ensure that national security is preserved.

Hence, heavier penalties are provided based on the degree of the offence, including the imposition of fines and jail sentences. 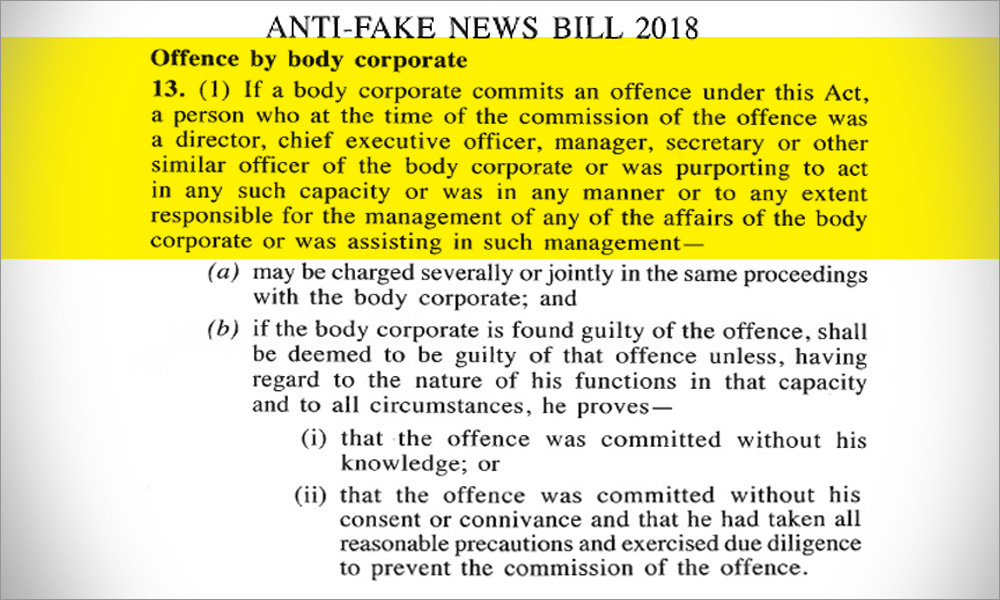 6. Is the bill only to control the spread of fake news in social media?

The bill regulates the dissemination of fake news in any medium of publication and is not restricted to social media.

7. Will this bill address the dissemination of fake news in its entirety?

This bill expresses the government commitment to address the dissemination of fake news due to the rapid and intensive growth of communication technology.

In this regard, the bill will complement the existing provisions of the law. At the same time, the scope of this bill is extensive and exclusive to address offences pertaining to fake news thoroughly and effectively.