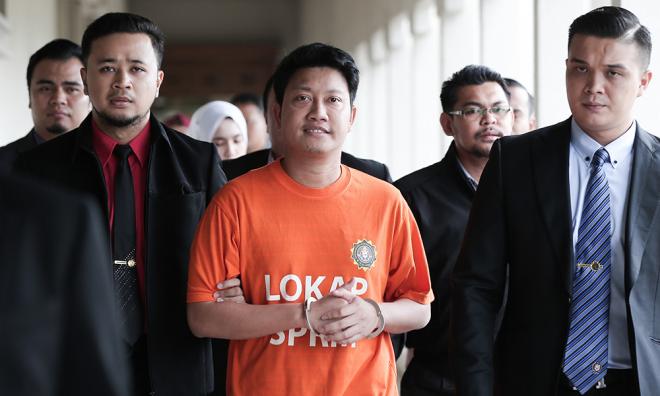 Ampang PKR Youth chief Adam Rosly Abdullah today told the Sessions Court here that he borrowed RM500,000 from an ah long (loan shark) to settle repayment on the house that he bought from Public Bank for RM1.2 million in cash.

He said he did so as he could not obtain a bank loan to finance the payment on the 2.5-storey, partly-completed bungalow at Kampung Melayu Ampang in June 2016.

“I came to know about the ah long from a friend, Hassan; I had asked him whether he knew of any source that I could borrow money from, so that my RM120,000 deposit on the house would not ‘burn’ (be forfeited).

“After getting the money, I had to make repayments to the ah long weekly by cash through a number of accounts, and the amount was based on an agreement with the ah long,” he said in the examination in-chief by counsel Sulaiman Ismail on the first day of his defence trial.

Adam Rosly, 31, is accused on six charges of giving false statements and submitting fake documents to the MACC during an investigation in 2017 into claims about his extraordinary wealth.

Aside from the loan from the ah long, Adam Rosly also said he borrowed RM180,000 from his mother in-law and grandmother.

“I also sold two cars – mine and my wife’s for RM250,000, while the balance of the payment to the bank was from income that I derived directly and indirectly from my business,” he said.

On the direct income, he said he derived it from the sale and purchase transactions of ‘sambung bayar’ vehicles through his company, Gegas Mentari Holding Sdn Bhd.

As for indirect income, he said he derived it from profits through providing financing assistance to friends who needed capital to start their business.

“I also get a monthly income of RM3,000 as Ampang Pangsapuri Taman Industri Lembah Jaya Management Corporation chairperson,” he told the court, adding, he settled the payment on the house on Feb 13, 2017.

On four other charges, he allegedly used two fake loan agreement documents from two individuals and two cash vouchers from his company to mislead MACC investigating officers, under Section 89 of the same act.

The charges carry a maximum fine of RM3 million or up to five years imprisonment, or both, each, on conviction.