In the face of multi-cornered fights, BN is talking about regaining a two-thirds majority in Parliament. Pakatan Harapan is playing up the possibility of a "Malay tsunami" against the ruling coalition while PAS wants to be a "kingmaker".

But what kind of voter swings are needed for any of the three scenarios to happen?

To help our readers, Malaysiakini has built a simulator for the 14th general election that will allow them to predict what the swings will be like and what the resulting number seats that BN, Harapan and PAS could win at both the state and federal levels.

The simulator can be found at the bottom of this story. Readers can test various scenarios by keying in the percentage of supporters from BN, Harapan or PAS that they think will switch over to their rivals.

The simulator, which predicts along Malay and non-Malay voting trends, is only for Peninsular Malaysia.

As Sabah and Sarawak make up more than 60 ethnic groups and are more complex than their West Malaysia counterparts, their voting trends cannot simply be predicted along Malay and non-Malay lines.

The simulator is based on the results of the 13th general election and does not take into account the Election Commission's recent redelineation exercise or the new parties. For example, Amanah's present seats are still considered PAS.

Below are some simple sample scenarios to try out but readers can test more complex ones on the simulator.

There are a total of 165 parliamentary seats in Peninsular Malaysia and 57 seats in East Malaysia.

A total of 112 seats are needed to win and 148 seats are required for a two-thirds majority in Parliament. 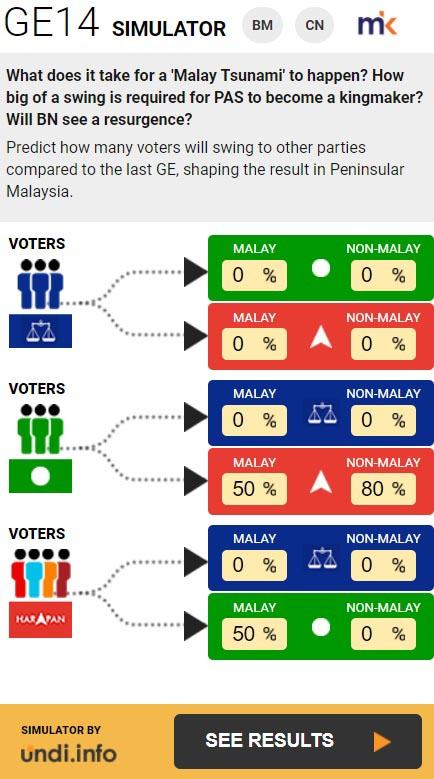 PAS which is no longer working with Pakatan Harapan (previously Pakatan Rakyat), is expected to lose the bulk of its non-Malay support.

In this multi-cornered fight scenario, we assume PAS loses 80 percent of its non-Malay voters and 50 percent of the Malay voters who supported the party under Pakatan Rakyat to the reincarnated Pakatan Harapan.

In the same vein, we also predict that Harapan will lose half of their Malay voters to PAS.

With these conditions, BN will only need to maintain its GE13 support to increase its share of parliamentary seats from 85 to 123 in Peninsular Malaysia. 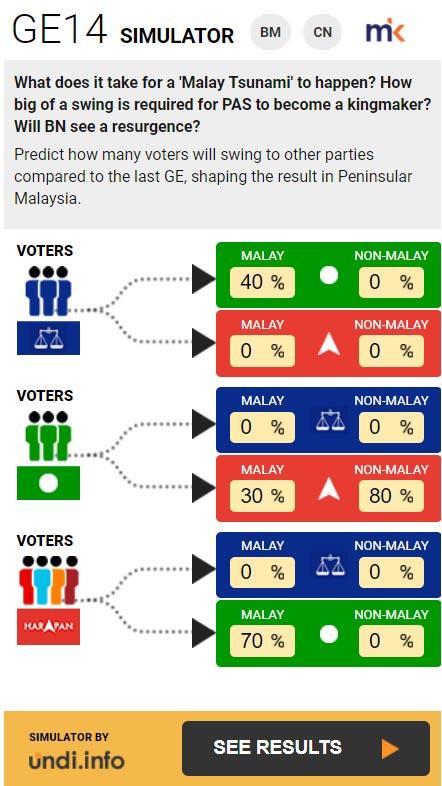 If it remains status quo in East Malaysia, BN would have a total of 171 parliamentary seats, more than enough to regain a two-thirds majority in Parliament.

We assume PAS loses 80 percent of its non-Malay support to Harapan but is able to retain most of its Malay support.

To be kingmaker, not only must PAS retain 70 percent of its Malay support but at least 40 percent of Malay voters who supported BN must swing to PAS while Harapan gets zero. 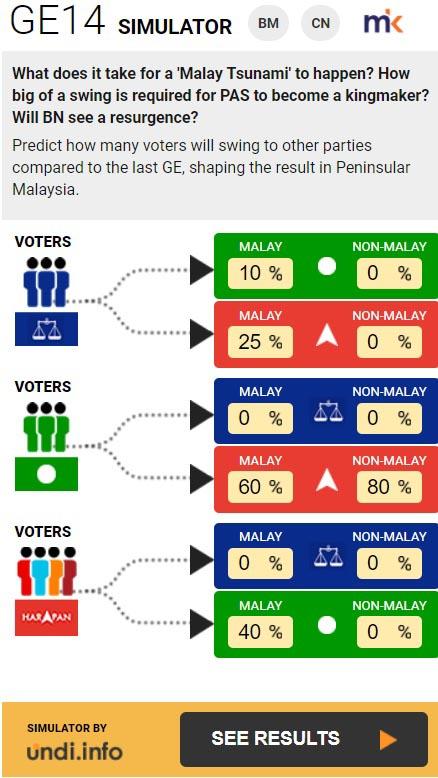 This would give PAS 65 parliamentary seats in Peninsular Malaysia while BN will pick up 54. Even if it remains status quo in East Malaysia, BN would only have 102 seats, short of forming the government.

We assume if PAS loses 60 percent of its Malay votes and 80 percent of non-Malay votes to Harapan as a result of no longer being in Pakatan Rakyat. In the same vein, we say that Harapan loses 40 percent of Malay support to PAS.

This scenario would work in favour of BN which will pick up 117 seats, Harapan 48 and none for PAS.

But this is still not enough as BN will narrowly form the government with a total of 117 seats, assuming a status quo in East Malaysia, though some may argue that Parti Warisan Sabah can deliver some seats that could make a difference.

However, if all the conditions above are retained and the swing of Malay votes from BN to Harapan is increased from 20 percent to 25 percent, Harapan would win 122 seats, enough to form the federal government.

The above are just simple examples. As with any general election, voter swings can be complicated and readers are invited to experiment with the simulator below.