COMMENT | Deliberately choosing a weekday for polling is another backhanded admission by caretaker prime minister Najib Abdul Razak that he strongly believes in a ‘Malay tsunami’, which could be a ‘Malaysian tsunami’ if turnout among non-Malays remains high.

I recently predicted that Najib would go for a weekday polling day after he deregistered Dr Mahathir Mohamad’s party Bersatu through the Registrar of Societies. It is a telling sign of a desperate man, and his second desperate act yesterday again reveals his fear.

For nearly two years, regardless of their political leaning, analysts have been predicting a BN victory, mostly due to three factors: redelineation, PAS as a spoiler and a low turnout.

Compared to 2013, the opposition has only one advantage: Mahathir, who never lost any single political battle after 1969. Mahathir leading Pakatan Harapan has fuelled speculation that a Malay tsunami will occur, but there hasn’t been any conclusive evidence of this.

Some would even flatly dismiss such a possibility, predicting that Harapan will come in third in terms of Malay support, after Umno and PAS, believing that Malay politics remains stuck in an Umno-PAS dichotomy.

Ultimately, how different the outcome of the election will be from the last depends on two factors: swing and turnout.

Think of all eligible voters as two groups. There are those who cast a valid vote in the last election, and therefore with a voting pattern that can be collectively recognised. Let’s call them ‘old voters’.

Then there are the ‘new voters’, who didn’t vote in the last round – due to not being registered, choosing not to vote, or casting a spoilt vote, intentionally or not – and therefore with a voting pattern that cannot be collectively recognised. 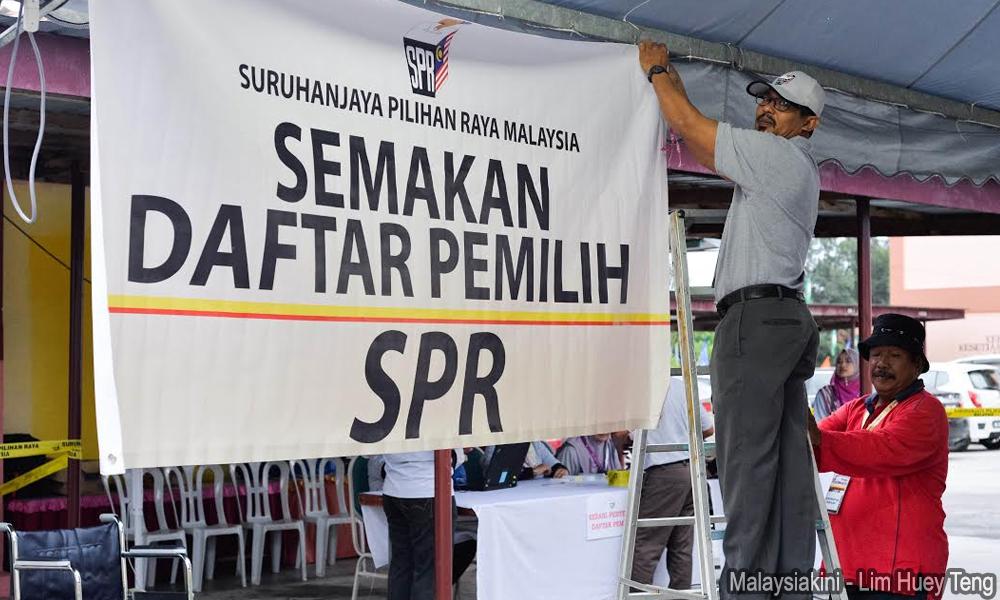 Using the last election as the baseline, we can predict the election outcome by guessing what would happen to these two groups of voters: how many old voters will change their voting pattern, and what is the net outcome? How many new voters will vote, and which parties will benefit from their support?

Of course, some old voters may change their voting pattern by not voting this time, hence affecting turnout, rather than producing a swing.

In 2013, 11.05 million people cast valid votes for the parties. Where will their hearts go this time? Now, 14.85 million are registered. Which parties will get the bulk of the 3.7 million new voters?

If turnout rate is high, gerrymandering calculation is thrown out of the window by uncertainty.

What is a ‘Malay tsunami’?

PAS playing spoiler and the Malay tsunami are both generally about the swing. How many Malay (old) voters would ditch Najib, Umno and BN? Would these voters go Harapan’s or PAS’ way?

But Malay tsunami can also refer to turnout. Will Malay (new) voters turn up in droves and vote against Najib, Umno and BN?

By definition, a Malay tsunami means a substantial Malay swing and a strong leaning among new voters towards Harapan (or PAS) that dislodges Umno. This does not cover fragmented Malay votes that produce Umno as a minority winner. 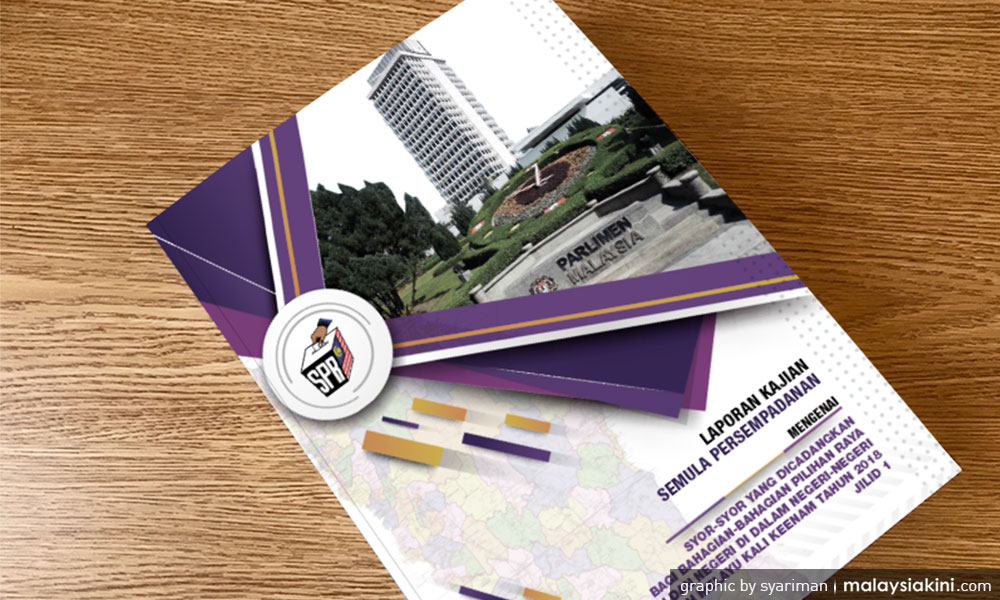 With the bulldozed delineation that increases the number of Malay-dominated constituencies and the percentage of Malay voters in many mixed constituencies, this means a high turnout of non-Malays alone can only save Harapan’s one-third parliamentary strength.

However, it can never be enough to oust Umno.

Given the redelineation outcome and unpredictability of this Malay tsunami, one can safely predict that Harapan has no chance at all of winning power without at least an 85 percent turnout.

A low turnout of 70 percent will be enough to allow BN to regain its two-thirds majority, even if its vote share drops to 40 percent.

So, Najib should be very confident, since he believes that no Malay tsunami will occur.

If the non-Malay turnout can be suppressed by encouraging resentment against Harapan (as “the other rotten apple”), Najib is set to score an immense victory, starting with a two-thirds majority in the Parliament. 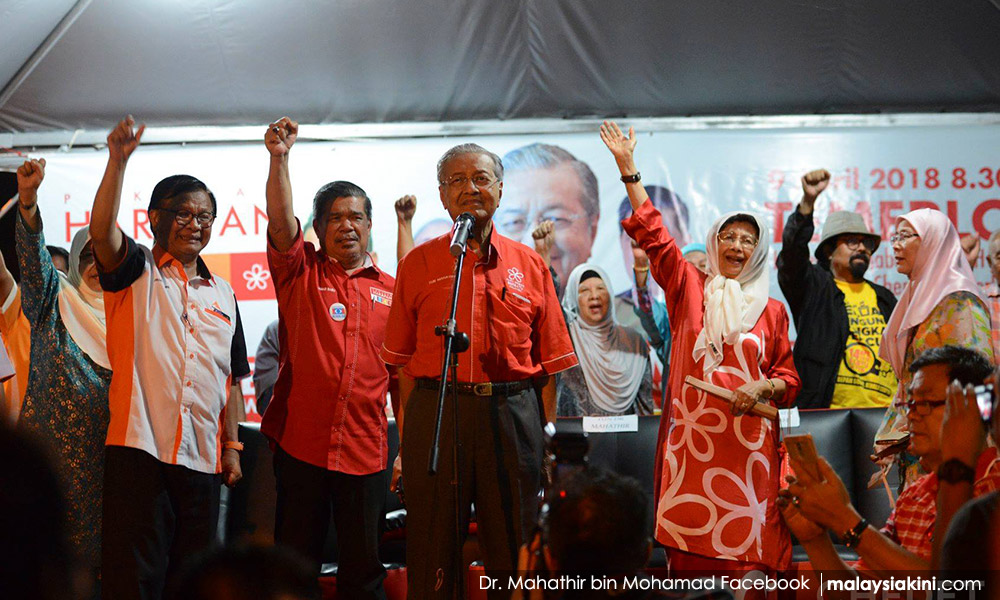 Najib would then be able to quickly pronounce Mahathir’s political death if Harapan cannot retain its one-third, and push Bersatu and Amanah towards oblivion. He would have done what Tengku Razaleigh Hamzah and Anwar Ibrahim both failed to do.

His ally PAS would have proven its own indispensability to any opposition coalition, even if it loses every parliamentary seat it contests.

In the eyes of hardline Islamists, PAS’ electoral disaster would be the necessary sacrifice to uphold Islam and Abdul Hadi Awang, its most steadfast champion – after all, as the saying goes, “kejar dunia, akhirat lari; kejar akhirat, dunia akan mengikuti.” (Chase the worldly, and lose sight of the afterlife; chase the afterlife, and the worldly will follow).

Harapan would soon be pointing fingers at one another over PAS’ exit. Next, pressure would be mounted on PKR, Bersatu and Amanah to be more pro-Malay and more supportive of PAS’ agenda. DAP might even have to leave the opposition coalition to fend for its non-Muslim and secular base.

With an opposition completely in disarray and PAS setting the agenda, Najib would be safe, as no foreign powers would have the appetite to pursue 1MDB at all costs. And if there is an economic uptick, Najib may even slowly regain his popularity as the opposition and civil society lose their vigour.

Why is Najib so desperate?

Najib should be confidently smiling at his unstoppable victory, but why is he so desperate to deregister Bersatu?

It is in Umno’s playbook to buy votes and rig constituency boundaries, but Mahathir never did deregister Tengku Razaleigh’s Semangat 46 or Anwar’s PKR on the eve of an election. Mahathir beat his enemies in the battlefield instead of denying them their party label, because a straightforward victory would give him more legitimacy.

Malay politics places a high value on machismo, admiring warriors and detesting cowards. And what can be a greater act of cowardice than taking away one’s enemy’s party logo?

So, why is Najib so desperate, that he who boasts a warrior’s lineage would risk being chastened as a coward?

Why would Najib give Harapan a convenient explanation that their defeat is due to foul play, rather than to the opposition’s disunity or the people’s apathy? 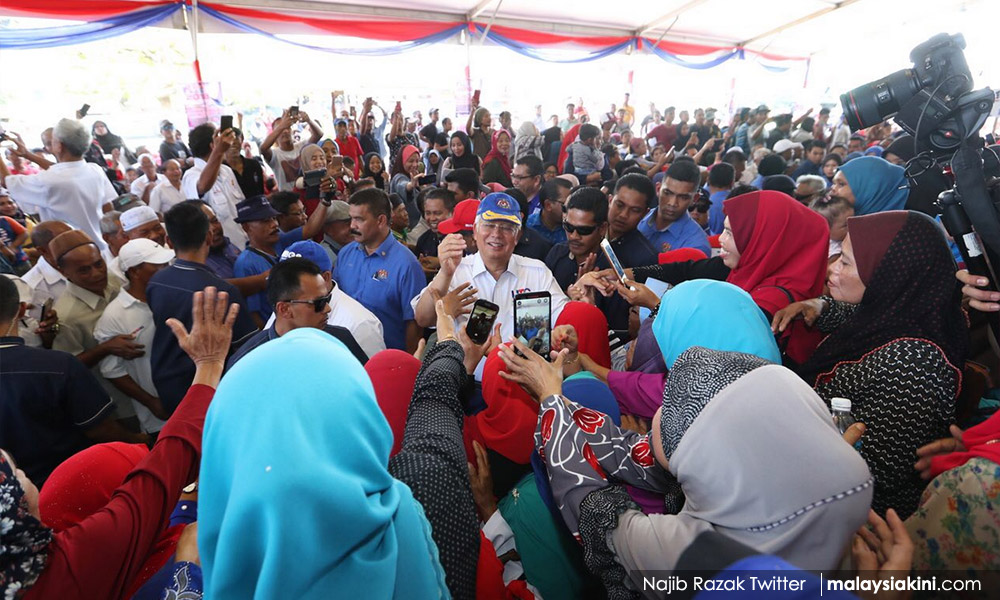 What more viable explanation can there be than Najib strongly believing that a Malay tsunami will occur? His acts have betrayed his claim.

I was doubtful of a Malay tsunami myself. Now I believe in it, because Najib does.

Compared to pollsters’ sample sizes of 1,000 or 2,000 random respondents, Najib has thousands of intelligence agents from the police, military, bureaucracy and party. Between pollsters and Najib, I believe in Najib.

And yesterday, a Wednesday was set as polling day. Do you see what I see?

Hoping to suppress votes across the board, Najib seems to believe in not just a Malay tsunami, but a Malaysian tsunami.

Polling on a workday would burden millions of voters who work and live outside their constituencies, especially those who live away from home on the other side of the South China Sea or the Straits of Johor.

It also reduces the number of polling agents and Bersih observers vital to deter electoral fraud.

But can it guarantee low turnout? Within hours, the internet is full of three types of responses.

First, working people have begun to apply for leave to go home to vote. In an image that has gone viral on social media, an employee gave his reason for leave on that day: “To Save Malaysia!” 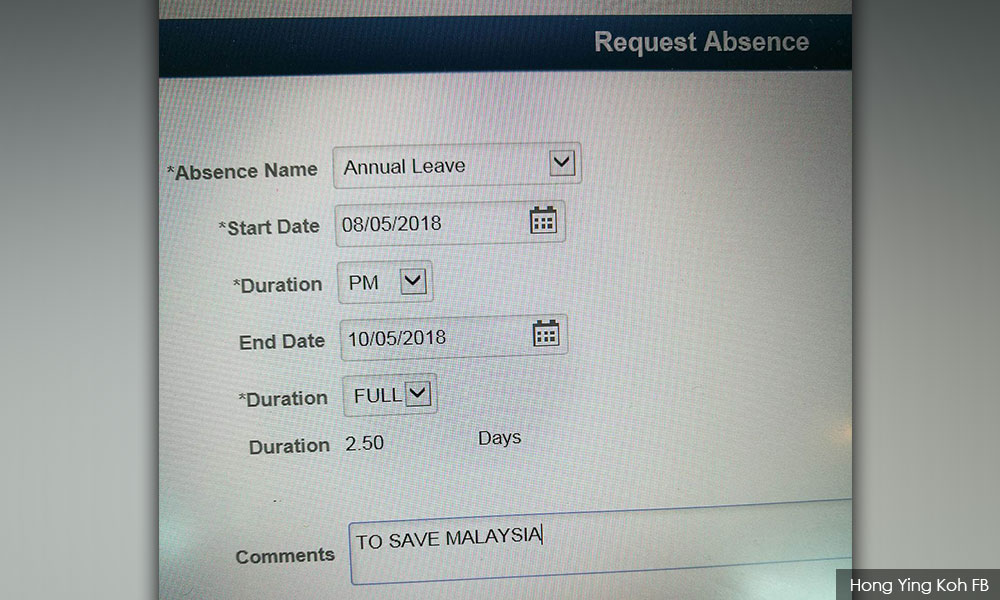 Second, some companies have declared polling day to be a holiday. Others, like Marble Emporium, even sponsor the travelling expenses of their staff, citing employers’ responsibility.

Thirdly, people are coordinating carpools or even sponsoring strangers like students to go home to vote.

If enough voters and enough companies do that, on May 9, Malaysia would be virtually on hartal (strike), when people stop their economic activities to make a point.

Politics is full of unintended consequences. Let’s defy all odds and make an 85 percent turnout happen, like we did in 2013.

This time, let’s show Najib what a Malaysian tsunami – not just a Malay tsunami – looks like.

WONG CHIN HUAT studies electoral, party and identity politics in Malaysia. He is head of the political studies programme at Penang Institute.