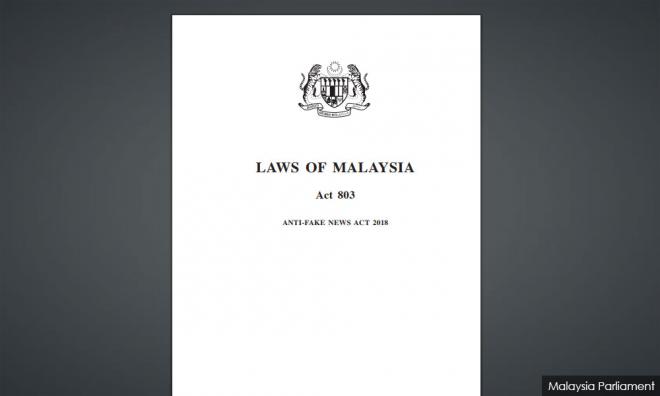 Repealing AFN law must be priority, before and after GE14

COMMENT | The Malaysian authorities continue their relentless drive to shrink freedom of expression. On Monday, April 2, 2018, Malaysian lawmakers passed the anti-fake news law as 123 parliamentarians voted in favour of the bill.

The act was subsequently passed by the Senate on April 3 and came into force on Wednesday. Under the new legislation, anyone who publishes or circulates information that is “wholly or partly false” could be severely punished with a fine of up to RM 500,000, a prison sentence of up to 6 years, or both.

This further criminalisation of speech, already subject to a wide variety of arbitrary, restrictive and highly punitive legislation, should be a cause of alarm for everyone.

The definition of “fake news” in the new law is broad and vague, and therefore, open to be used to stifle free speech. It includes “any news, information, data and reports which are wholly or partly false, whether in the form of features, visuals or audio recordings or in any other form capable of suggesting words or ideas.”

The term “fake news” was popularized by US President Donald Trump, who has used it to condemn publications and broadcasters which are critical of him. Different leaders from countries who appear to be similarly intolerant of criticism, including Myanmar and Venezuela, have followed suit, and started to use this term. It is worrying that in Malaysia, the authorities are trying to hide behind the term “fake news” to crack down on critics.

As a whole, this act seems designed to silence those who dare to speak out, in particular, those who express their views on social media platforms. The new bill could be used to target peaceful government critics, activists, journalists, opposition leaders and members of the general public...