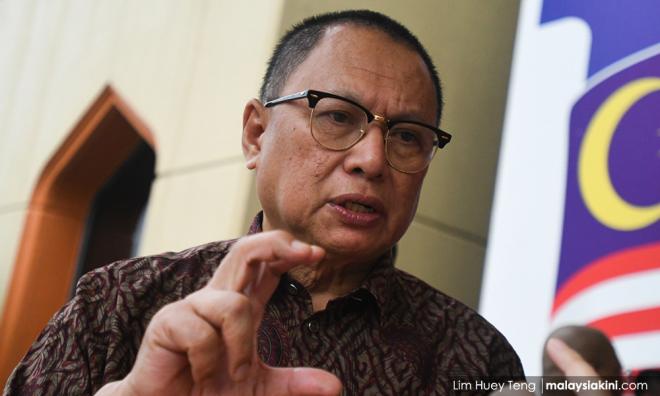 Puad fires first salvo on Khaled, vows to fight 'to the last drop'

Puad accused "Team Khaled" of not being loyal to Prime Minister Najib Abdul Razak, yet manoeuvring to fill their own people as BN candidates in Johor.

In the end, the candidates' selection was based on cronyism and preparations for the coming party election.

"His people, who have criticised Najib on WhatsApp groups, have all been retained as candidates. Some of them were even bold enough to have demanded Najib to resign (on WhatsApp)," he said in a statement tonight.

Puad, a staunch defender of Najib and BN, yesterday resigned from the government's propaganda arm, Special Affairs Department (Jasa) after becoming angry at not being re-fielded in Batu Pahat. Puad put the blame on Khaled.

"Khaled changed the candidates' list on his whim and did not base on merits. It was based on political support and rivalry in the party," he said.

Puad said among the seats that saw such instances were the state constituencies of Penawar, Layang-Layang and Serom.

Puad accused Khaled of parachuting his supporters into these seats and sidelining local leaders who had worked the ground there.

"That is why I said the system (of candidates selection) has been damaged by the very people who claim it is good, to an extent that a candidate who has a photograph of laying with a woman that is not his wife, can become a candidate," he said without naming names.

He was instead replaced by Batu Pahat Umno Wanita chief Haliza Abdullah.

At least two statements purportedly from Puad to his friends indicated that he will contest against BN as in independent in Batu Pahat and the state seat of Senggarang.

However, Puad has refused to confirm the authenticity of this messages.

But his statement tonight indicated his preparedness to confrontation.

"I know many will condemn me for this latest posting. I will not respond to them. What is important is that I reveal what is in my heart. As I have said, I will fight to the last drop.

"I will remain strong and have become more emboldened by this test," he said.

Puad's statement on Facebook tonight was his first attack on a fellow Umno leader.