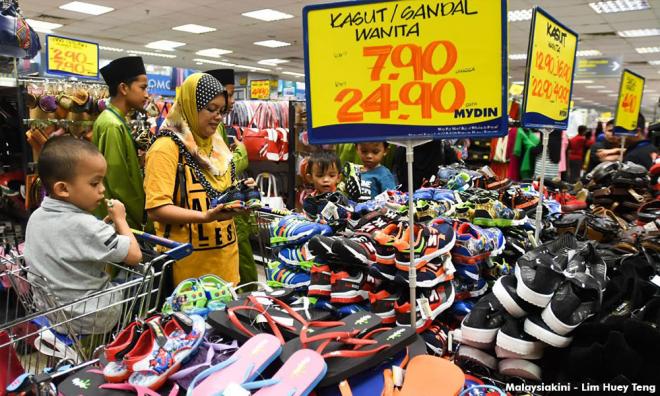 Yoursay: Scrapping GST may not bring prices down but…

But with GST, there is an additional cost of 6 percent applicable to all products, and depending on the number of distributors to end user in the distribution chain, the consumer would end up paying about 12 to 24 percent in cumulative taxes.

What about other factors? The cost of employing an accounts officer or outsourcing the job to accountants to do the GST accounts is an additional few thousand ringgit, as the GST law is barbarous.

And since traders are also end users for products we buy for personal use, we are also paying GST. So we have to mark up prices by 30 percent as subsidies for petrol and others have been removed, to compensate for our additional costs. It's, therefore, better to remove the GST.

I feel sad for big families, especially during the year end when families go shopping for school bags, shoes and so on, because of the GST they have to pay. It's no use having BR1M, as the GST amounts to more than what the government gives.

An average family would end up paying approximately RM3,000 in GST a year, so what the right hand gives as BR1M, the left hand takes more than double in the form of GST.

When the country was without GST, there was lower cost of living, and the government gave many subsidies. It's only now with so much corruption that the government has to resort to GST.

Anonymous_aa3bc2d5: I agree with Centre for Public Policy Studies (CPPS) researcher Lau Zheng Zhou about the impact of Sales and Services Tax (SST) would bring if the GST is removed.

But the real size of the impact of SST, as with GST, is much larger in cumulative terms. So you're not paying just 6 percent GST but much more. The same goes with SST. It depends on prices being charged downstream, then upstream.

It also, as someone has suggested, depends on numerous other factors, including the ringgit's value on the exchange rates.

Abolishing the GST completely might help small businesses like those mentioned in this story. Prices might come down and if they do, it'll be a short-term gain for consumers.

Big businesses, however, will have no compulsion to pass on savings to consumers if their aggregate demand, measured by 'demand and supply' and income elasticities, is such that they can maintain old prices.

But prices will go up in the medium to long-term. You can bet on that.

Anonymous #33227154: We need to have laws that protect consumers from illegal profiteering and monopoly from businesses.

We should revive the consumers' association as a watchdog and to serve the consumers. For example, coffee shop prices rise almost 20 percent every year, even with the GST at only 6 percent. Is that ethical?

Anonymous #19098644: One of the real reasons for the hike in the cost of goods is actually the depreciation of the ringgit, which fell by almost 50 percent at one stage against the US dollar and is today still 30 percent less than its former value.

The result was, in ringgit terms, was that prices of imported goods were pushed up by between 30 percent to 50 percent, resulting in shock for many people including myself.

The solution is to strengthen the ringgit by controlling our debt and our debt servicing, which has exploded to RM800 plus billion and RM31 billion respectively. We should maintain the GST, while cutting down on leakages.

For example, it costs the government RM18 million to build a school, while the Chinese schools which are privately funded by the community are doing it for between RM9 to 10 million. So what happened to the RM8 million difference?

Anonymous 352541461767755: One of the reasons why the ringgit is depreciating and causing the prices of goods to go up, is because foreign investors leave Malaysia or do not want to come to Malaysia because they see Malaysians as having less purchasing power. Therefore, they would rather invest in other countries.

And why have Malaysians less purchase power? It is because of GST and the removal of subsidies.

Anonymous_aa3bc2d5: The problem is the way GST was implemented, and the timing of its implementation was odd.

GST did not come with a lot of homework done. It was done hurriedly to put a floor under the then yawning budget deficit. And despite claims by caretaker prime minister Najib Razak that the deficit has narrowed, there are doubts given the profligacy of spending on the one hand and borrowing debts on the other.

If, as you suggest, GST must be abolished and subsidies reinstated, the problem of high prices won't disappear. In other words, you won't get lower prices over the long run, though you may for the short run.

Remember that to reinstate subsidies - and subsidies haven't completely been removed; take petrol retail prices being 'stable' the last seven weeks, for instance - other taxes, levies, fees and charges will be raised to pay for the subsidies you want.

Subsidies are no more free lunches. Somebody, somewhere, will have to pay for subsidies at some point in time. Pakatan Harapan knows this, and its promise to abolish GST is crudely populist and insane.

It will be forced to change its mind if and when it’s in power and looks at national accounts first hand to realise the problems the Najib and previous regimes, including former premier Dr Mahathir Mohamad, have created for Malaysia over the decades.

Anonymous 352541461767755: GST has killed the middle-income earners. The high-income class can afford GST. Those in the low-income bracket don’t spend much, and they are compensated with higher BR1M and an occasional subsidy somewhere.

The middle-income people are the ones who are badly hit, they spend more, but they are not eligible for any initiatives from the government for the people.

Even on necessities like food, people will reduce spending on fine dining and restaurants. In other words, many industries are being impacted, as people have less money to spend.

Anonymous 352541461767755: It is just common sense that reducing GST would rejuvenate the many dying industries of various sectors, with additional RM4 billion per annum, which is currently going into the government coffers, now going back into the economy, circulating among different industries.

Whether prices reduce or stay the same price doesn’t really matter, let demand and supply fix the price tag. But an additional billion injected back into the economy would surely help every industry.

GST might not reduce prices, but people would have more money to spend if it is abolished. For example, the same cloth traders that have to pay 6 percent to the government in GST but do not charge it to the consumer, now has 6 percent more to spend if GST is abolished.

This would apply to all sectors, and the result is the market would be moving again.

Jesmine: The abolition of GST would reduce the price of goods eventually, and more importantly, it will not keep spoon-feeding Mr and Mrs PM.

If GST is managed as well as Singapore and Australia where it benefits the rakyat, then the rakyat might be able to accept it.

So please don’t tell us meagre rakyat that GST has no impact, because it does have a huge impact.