GE14 | Free food, a free concert, a hologram of caretaker Prime Minister Najib Abdul Razak, modified cars and the chance to win a motorcycle along with RM25,000 in cash - these were just some of the things BN Sekinchan offered locals in its bid to wrest the fishing village from DAP.

Last night, a large section of the Sekinchan town centre was cordoned off to accommodate the “BN candidates roadshow concert” event.

An hour before the event was scheduled to start, about 1,500 people had already thronged the free-for-all buffet laid out. Food included crabs, roast duck, chicken, laksa and made-to-order burgers.

“Sekinchan must have a representative from BN, many issues regarding fisherfolk that Ng Suee Lim (DAP’s incumbent assemblyperson) can’t help solve.

“Many issues regarding paddy fields that Ng Suee Lim can’t help solve. You must have Ah Man to help solve them.

“We brought back fisherfolk from Indonesia, we helped paddy farmers and fisherfolk […] we help everyone. 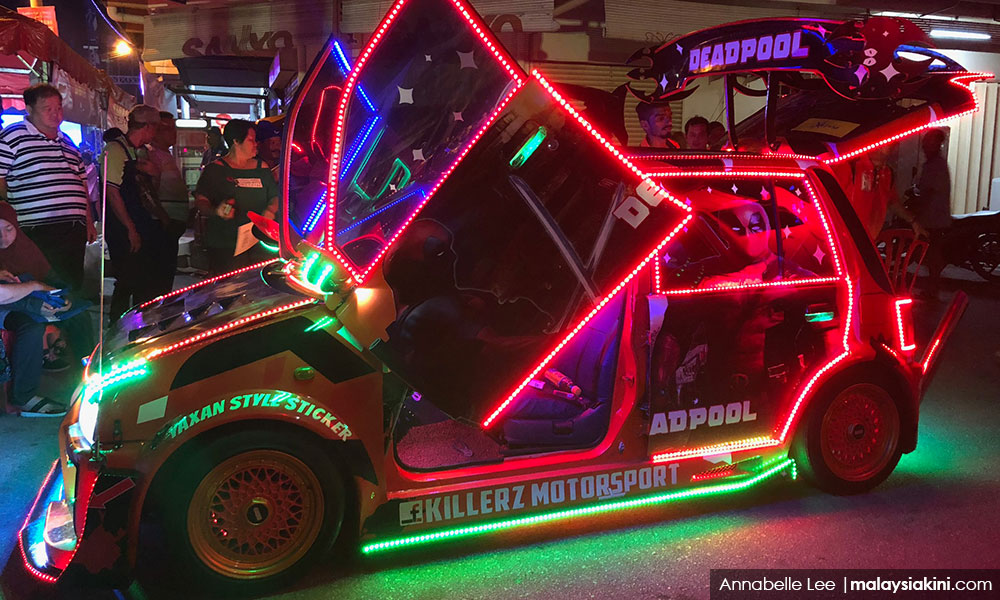 Budiman, who is seeking a second term in Sungai Besar, has previously said he had been involved in securing the early release of Malaysian fisherman Chia Kee Chan from an Indonesian prison.

BN-MCA’s Sekinchan candidate, newcomer 29-year-old Lee Yee Yuan took to the stage next and introduced himself as a local boy who was committed to bringing about a better life for locals.

“As a young person, I will focus my full attention on services because that is more important than just talking.

“What the people need here are not luxury or long speeches or promises of the moon and the stars but services that focus on the rakyat.

“And I will definitely be here with you because my home is here, I am a local boy, anak jati Sekinchan,” Lee said as brochures of his manifesto were distributed to the audience.

Earlier, audiences marvelled at two multi-coloured modified cars and a 3D hologram of Najib speaking about BN’s promises as outlined in their GE14 manifesto.

A line-up of local singers later entertained the crowd in Malay, Mandarin and Hokkien drumming up support for BN and MCA between songs.

Despite constant rousing from the emcees and entertainers, the crowd appeared strangely subdued with only a few clapping or cheering. 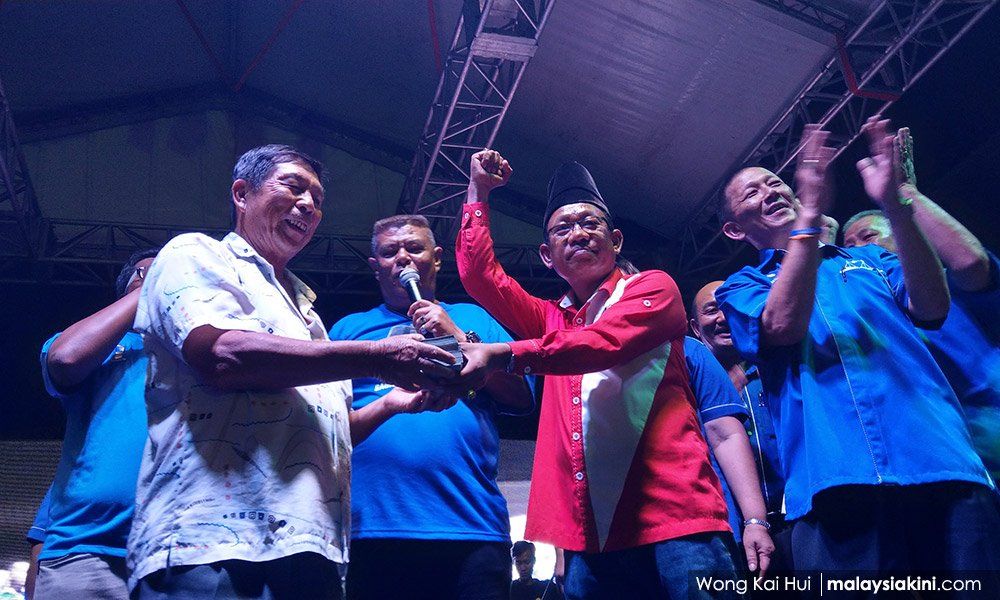 However, they became quite excited when the night’s organiser and BN Sungai Besar Umno chief Jamal Mohd Yunos announced that he would be offering RM25,000 along with a brand new motorcycle as the top prize for the night’s lucky draw.

He also said BN had raised RM150,000 in donations from the audience at the event.

Speaking to Malaysiakini on the sidelines of the event, Jamal denied that he or BN sponsored the night's events and said the lucky draw had been funded by local businesses.

“All the sponsors are my friends who are traders and business people in Sekinchan,” he said.

Earlier, Jamal had also announced that he was being sponsored by a “donor’ in offering a RM2,000 “incentive” for Sekinchan fisherfolk if BN won the state seat.

In a straw poll, Malaysiakini found that many attendees last night were MCA members themselves. Locals who were not members said they had split their night between this event and opposition coalition Pakatan Harapan’s mega-ceramah which was held concurrently several streets away.

A woman, who did not want to be named, said she had come for the free food but would soon head to the Harapan ceramah (below) where DAP’s Ng along with DAP heavyweights Gobind Singh, Tony Pua, Yeo Bee Yin and Nga Kor Ming were speaking. 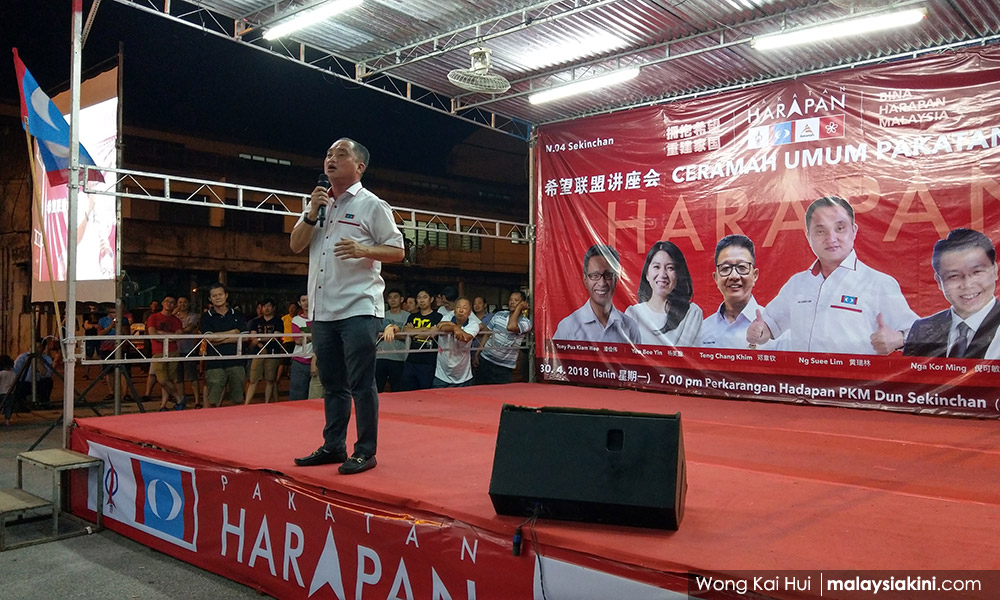 “I came here to have a look and will go over there to have a listen. We still have nine days to go for the campaigning period so I will slowly make my decision (on whom to support).

“These past few years have been good and bad. For business people here, they are making more money here, (but for us) the traffic is getting worse and things are becoming expensive.

“We have supported the ‘rocket’ (DAP) all this while. This time, I am still thinking about (who to support),” she said.

Another man, Seng, told Malaysiakini that he had also attended both events to see what each side had to offer.

“I came to listen to both sides. These past five years have been so-so and I think MCA has a chance here, they just need to work hard. Tonight’s event is quite fun, some entertainment makes it less boring.

“But really, they should not have both their events on the same night or else the crowd will be split. They should have had it on different days,” he pointed out.

DAP's Ng has been Sekinchan assemblyperson for the past three terms and is widely credited for transforming the fishing village into a popular tourist spot.

In GE14, Ng and MCA's Lee as well as PAS' Mohd Fadzin Taslimin will battle it out for Sekinchan.