Electoral reform movement Bersih and NGO Engage have found 10 major irregularities in the electoral roll as the country heads to the 14th general election (GE14).

In a statement today, the two bodies said the flaws were discovered based on analyses of the historical and the latest electoral roll, which will be used for GE14.

The 10 flaws are as follows:
1) Deceased voters were re-registered as new voters (23 cases);
2) Former citizens were re-registered as new voters (48 cases);
3) Voters existed during GE12, disappeared during GE13 but reappeared in GE14 without any track record in the supplementary electoral roll (2,015 cases);
4) Voters removed due to inactive record in the JPN (National Registration Department) system were re-registered as new voters;
5) Voters changed their voting address very frequently (over 1,000 cases);
6) Voters’ year of birth does not match with IC number (795 cases);
7) Many voters were registered in one address (over 500,000 cases);
8) Up to 15 percent of voters without the addresses (2,123,973 cases);
9) Retired police officers remain as advance voters (3,525 cases, including former IGP Khalid Abu Bakar and Ismail Omar) and double issuance of postal ballots; and
10) Same army ID being reused by another person.

These irregularities are nothing new, the statement pointed out, as they have been noted by the Parliamentary Select Committee (PSC) in 2011, and duly recommended to the Election Commission (EC) to clean the electoral roll.

"And yet, we are extremely disappointed that these irregularities continue to persist, given the general election is going to be held next week.

"The integrity of the electoral roll is one of the most important elements in clean and fair elections. A defective electoral roll will bring into question the legitimacy of the whole election," said the statement, adding that these preliminary finds were just the "tip of the iceberg".

Given the flaws, there should be a complete independent audit of the current electoral roll, Bersih and Engage said.

"The incoming government should also repeal Section 9A of the Elections Act to allow challenges to the electoral roll in court."

Bersih and Engage then pledged to assist polling agents by providing the list of suspicious voters in their respective constituencies, nationwide.

"We call on all voters to check their voter status on https://pengundi.spr.gov.my. If there are any irregularities found, they are urged to submit complaints to the EC and to Bersih at https://aduan.pemantau.org/.

"Lastly, Bersih and Engage call upon all legitimate voters to return and cast their votes on May 9, 2018. The effect of cheating, in particular involving phantom voters and electoral roll, can only be overcome by an overwhelming voter turnout." 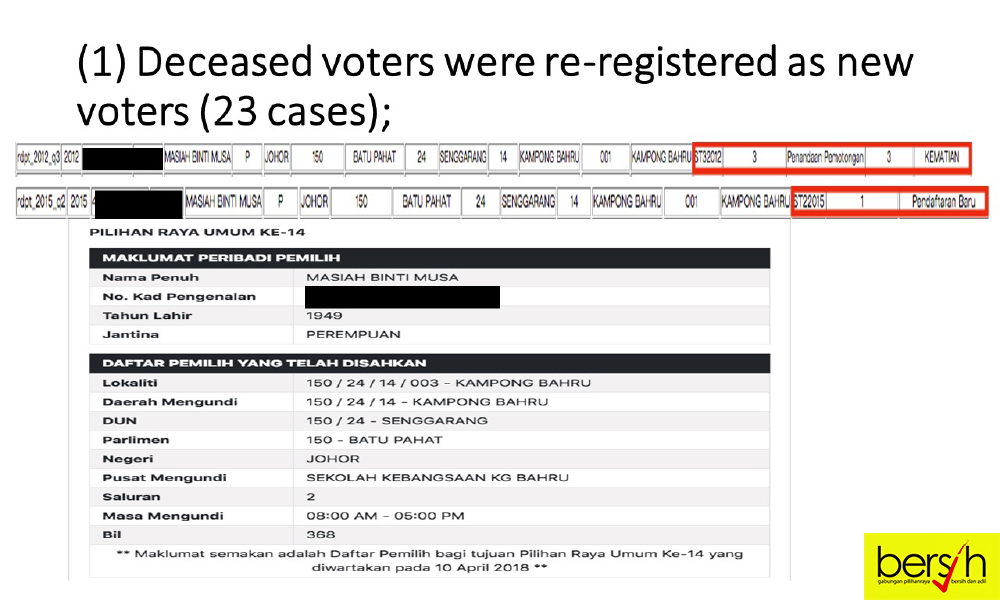 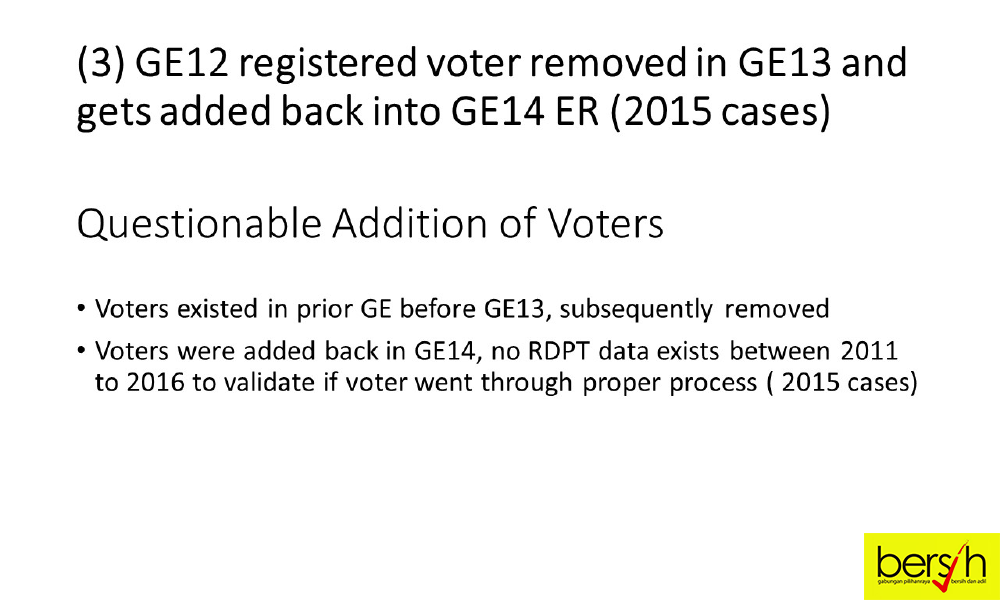 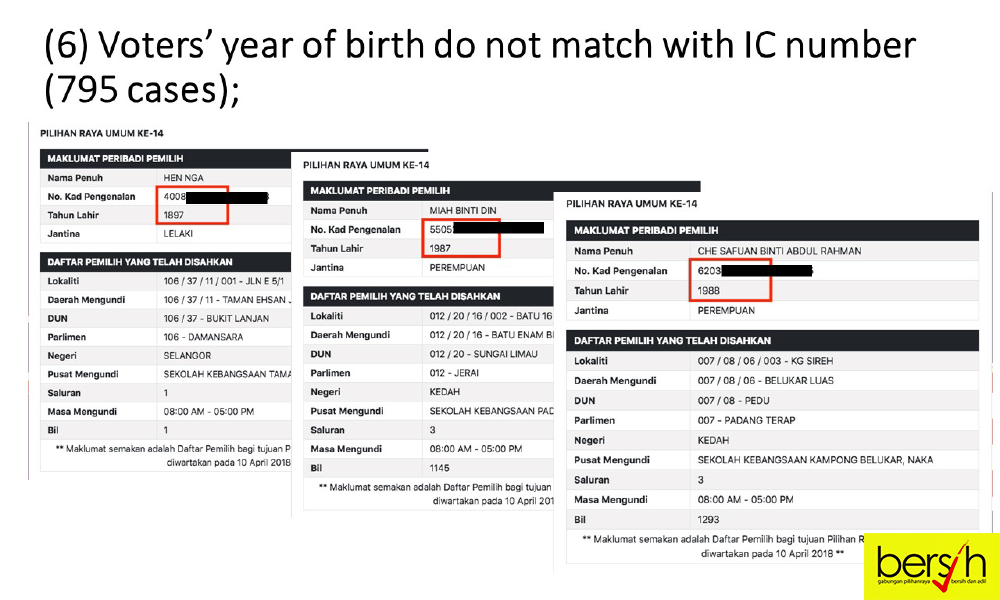 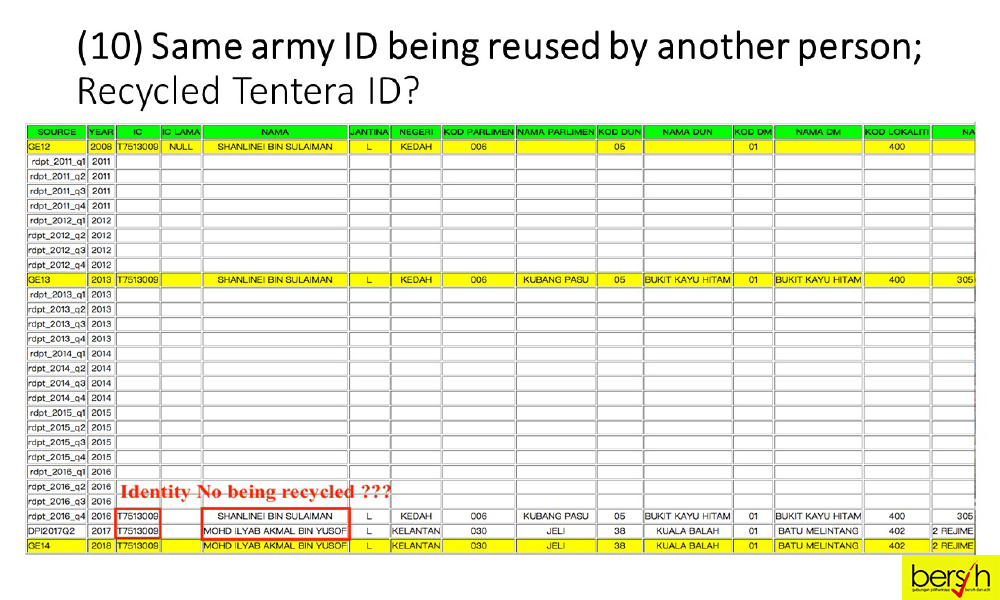