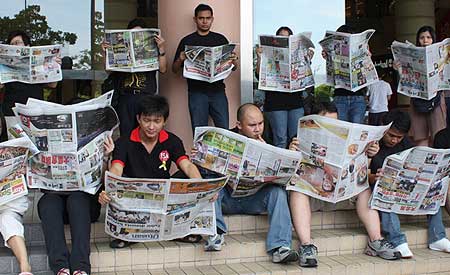 NUJ reminds Harapan of promise to repeal PPPA in 100 days

The National Union of Journalists Malaysia (NUJ) has expressed hope the new Pakatan Harapan will keep its manifesto promise to remove laws that stifle press freedom.

“As we all know, Malaysia’s ranking in the World Press Freedom Index has been dropping from year to year during the previous government’s administration.

“Reviewing and repealing, if necessary, all relevant laws immediately will not only improve the media industry’s role and professionalism, but also boost its standard at global level,” said the NUJ executive council in a statement today.