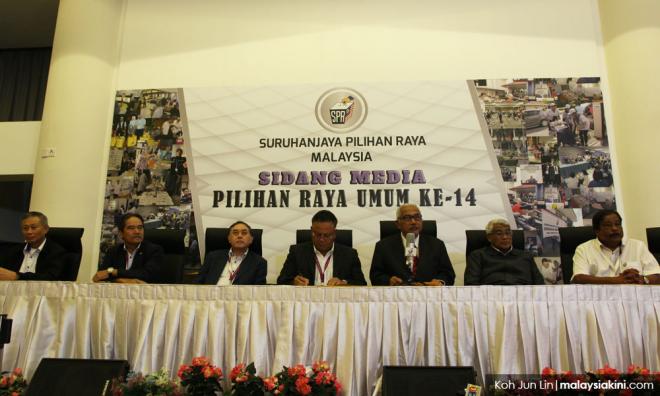 Electoral watchdog movement Bersih has called for all seven members of the Election Commission (EC) to resign, failing which proceedings should be initiated to remove them from office within the next 100 days.

“The polling day complaints Bersih received, together with the crimes of pre-polling day manipulations, clearly show the EC worked tirelessly to pursue its goal of ensuring victory for BN...

“These incidents throughout the country are reflective of the attitude of the election commissioners themselves. In their conduct, they have created an atmosphere of impunity among those that break election laws, particularly in favour of BN,” he said.

Shahrul Aman called for a special task force to be set up in the next 100 days by the police and the Attorney-General’s Chambers to press charges against all EC commissioners and some election officers for breaking the law and for a royal commission of inquiry into the electoral system to be set up, within the same period, to pave way for reforms.

Referring to Pakatan Harapan’s promises to reform the electoral system, Bersih outreach officer Chan Tsu Chong said these reforms should start with the prompt removal of the EC commissioners.

Remove them, if they refuse to resign

“I think by law, for the removal of the election commissioners, there must be a form of a tribunal, like how you remove a federal court judge. All this will take time, so we cannot delay any further because we may not have five years.

“The Sarawak state election will take place within three years, so we want these reforms to be in place as soon as possible,” Chan said.

Malaysiakini has contacted Hashim for comment and is awaiting a response.

Harapan’s promises pertaining to electoral reform include placing the EC under parliamentary supervision instead of the Prime Minister’s Department and establishing a quota to ensure civil society representation in the commission.

It also promised to take into account reports by the Parliamentary Select Committee on Improvements to the Electoral Process, Bersih and the Institute for Democracy and Economic Affairs to improve the electoral system, as well as to introduce automatic voter registration and reduce the voting age limit to 18 years of age.