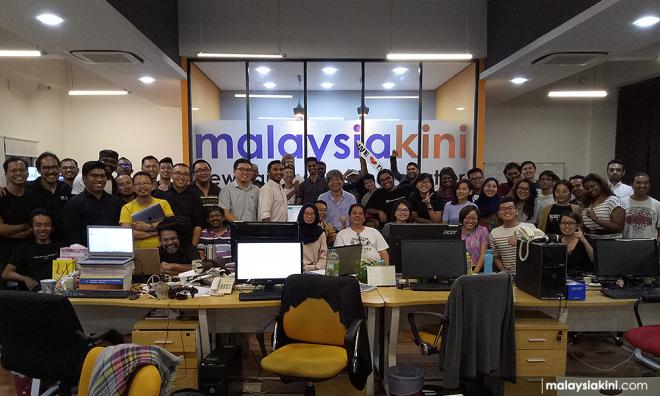 Malaysiakini was there when the going was tough, says Anwar

Malaysiakini was born in November 1999 during the height of the Reformasi movement following Anwar Ibrahim's sudden dismissal from government.

In an interview with the news portal, the PKR de facto leader expressed his appreciation to Malaysiakini and commended it for remaining committed to independent reporting.

“At a time when we had massive restrictions, where the media was nothing but incessant propaganda, Malaysiakini was there.

“(I’m saying this) not because you have been kind to me - you have been tough against me too - but as a pillar (of democracy), that is how an independent media should function,” he said when met at his residence in Segambut late yesterday.

Anwar added that credit should be given where it was due.

“I think the present government must give due recognition to the media who have played this role (as a watchdog) under very trying and difficult circumstances,” he said.

Over the past 18 years, Malaysiakini has covered Anwar’s two sodomy trials, countless reformasi rallies, five general elections, and suffered half a dozen of police and Malaysian Communications and Multimedia Commission (MCMC) raids.

Yesterday, exactly a week after the 14th general election in which Pakatan Harapan won, Anwar was granted a full royal pardon from the Agong and walked a free man.

This means he is now able to enter politics and contest in elections.

However, the 70-year-old politician had indicated that his official return to politics could be delayed as he intends to spend time with his family as well as going overseas to give lectures about Malaysia.

During his press conference at his residence immediately after his release, Anwar had thanked Malaysiakini.

“Terima kasih Malaysiakini. You have done a wonderful job,” he said after a Malaysiakini journalist stood up to ask him a question.