INTERVIEW | Anthony Loke says it was DAP strategist Liew Chin Tong who was first touted to helm the Transport Ministry in the event of Pakatan Harapan forming the federal government after the May 9 polls.

Though Harapan did win, the position fell to Loke after Liew was defeated in Ayer Hitam at the hands of MCA deputy president Wee Ka Siong by the narrowest of margins.

Liew, the Johor DAP chief, nevertheless played a part in unseating BN in the state, with Harapan retaining its five parliamentary seats and wresting another 13 from the former ruling coalition.

In an interview with Malaysiakini, Loke pointed out that Liew was the most interested in the post of transport minister.

"The Transport Ministry is an important federal portfolio. DAP had requested for it. The person who was most interested in it was Liew.

"But unfortunately, he was not elected. I took up the position on the recommendation of the party and approval from Prime Minister Dr Mahathir Mohamad. That was why I took it up," he said.

During the interview, Liew also paid a courtesy visit to the Transport Ministry, to welcome Loke on his first day in office. 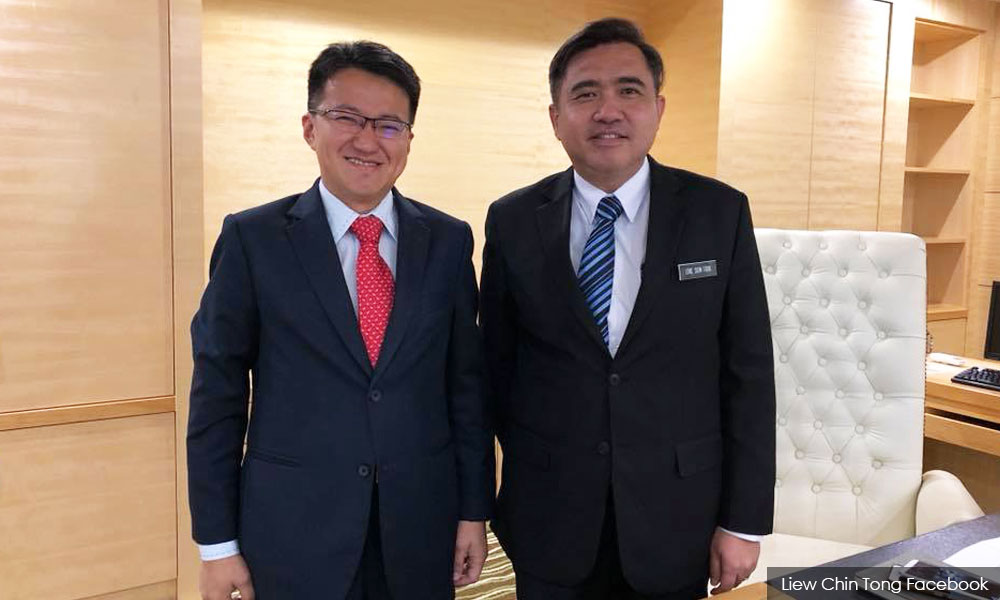 Asked if Liew would be co-opted into the ministry, Loke said he may yet have a bigger role to play.

"I am sure that Liew will play an important role in the new government. As of now, the matter has not been fully settled, but I am sure he will have a role to play.

"He may even be offered a more senior position than I can offer in this ministry," he said.

However, Loke said he was prepared to engage Liew's ideas for the Transport Ministry from time to time.

Liew had in the past shared opinions about public transportation, including placing the Land and Public Transport Commission (Spad) under the Transport Ministry.

The prime minister announced exactly that yesterday, with the dissolution of Spad and the co-opting of its staff into the Transport Ministry.

Loke also stressed during the interview that one of his priorities as transport minister will be to put an end to the culture of "lesen kopi," or driving licences obtained through corrupt means.

This, he said, was because the Road Transport Department (RTD) is one of the earliest agencies that young people encounter, which may consequently shape their perception of the government as a whole.

"I told the ministry's staff that the RTD is one of the first government department any citizens will engage with.

"Imagine when you come to obtain a driving license at age 16 or 17... If you (RTD) don't clean up (your image), it will make young citizens think that the whole government is corrupted.

"So, we have to clean this up by any means necessary. We must make RTD a department that has high integrity," he said.

"It's is already an open secret.... I think he is in denial mode.

"You have to acknowledge the problem.”

Loke urges MOT staff to serve, not line up to greet ministers

Loke: BN appointees at Transport Ministry will be told to go