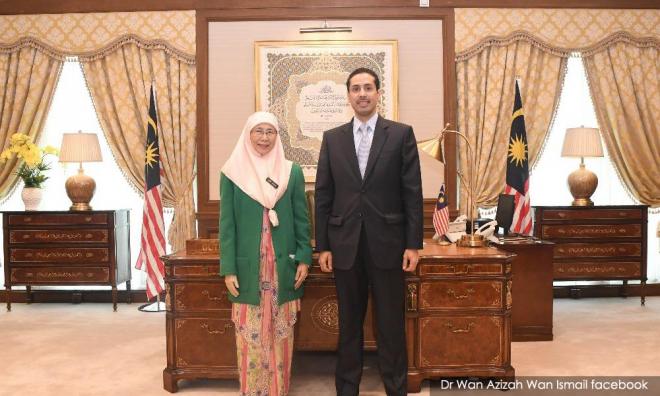 Education, agriculture, food security, women and pharmacy are some of the areas Malaysia and Qatar want to further expand on.

This was discussed during a courtesy call by Ambassador of Qatar to Malaysia Essa Mohamed Al Mannai to Deputy Prime Minister Dr Wan Azizah Wan Ismail at the latter’s office in Putrajaya Monday.

According to a statement released today by the Deputy Prime Minister’s Office in conjunction with the visit, it said Essa Mohamed had invited Wan Azizah to visit Qatar and to discuss the areas they could work together on.

The statement said Essa Mohamed told Wan Azizah that Qatar was going to have a direct shipping line to China, with two transit hubs, in Malaysia and Pakistan.

“We can do a lot together, including medical tourism,” Essa Mohamed was quoted as saying in the statement, adding that Malaysia’s nursing system was something that Qatar could use.

Essa Mohamed also said that food and medicine were areas where both countries could work together on as Qatar imports 95 percent of its needs.

Essa Mohamed had, during the meeting, also praised the smooth transition of power during the 14th general election in Malaysia that saw the first change of government in 61 years.

Essa Mohamed also shared that the Qatar government had pledged US$50 million (RM198.9 million) to help the Rohingya community in Malaysia.

Saying that this could be further explored, Dr Wan Azizah said: “We have a lot of influx of Rohinyas. We must have a well thought-out programme to combat this.”

Essa Mohamed further shared that the Qatar government was building a new city called Lusail, which is akin to Putrajaya, adding that two Malaysian companies were involved in the project.