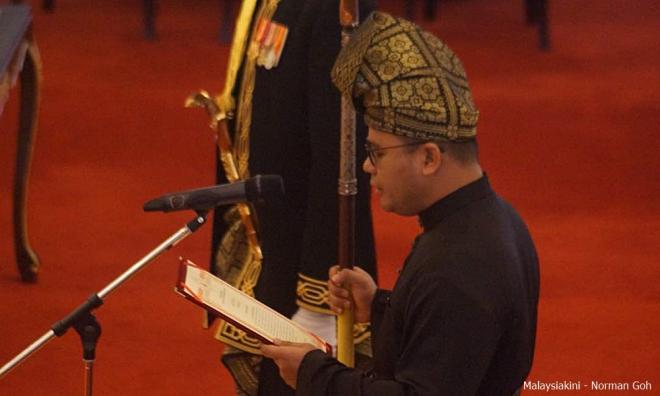 The swearing-in ceremony was conducted at Istana Alam Shah, Klang, before Selangor Sultan Sharafuddin Idris Shah at 10.15am.

Amiruddin, who is also the state executive councillor for youth, sports, culture and entrepreneur development, arrived at the palace’s throne room at 8.20am, together with his wife Masdiana Muhamad.

Also sworn in was Batu Tiga assemblyperson Rodziah Ismail, who will be replacing Amirudin in his former post as youth, sports, culture and entrepreneur development exco.

Speculation on the identity of the next Selangor menteri besar had been rife since Amiruddin’s predecessor Mohd Azmin Ali was appointed as the federal minister for economic affairs on May 21.

Apart from Amiruddin, the other frontrunners for the post were Ijok assemblyperson Dr Idris Ahmad and Seri Setia assemblyperson Shaharuddin Badarudin.

The swearing-in ceremony and taking of the oath of office this morning was also witnessed by the Tengku Permaisuri of Selangor, Tengku Permaisuri Norashikin, the Raja Muda, Tengku Amir Shah, Selangor mufti Mohd Tamyes Abdul Wahid and other state officials.

Earlier, Azmin attended a handing over ceremony with Amirudin at the palace’s Balai Menghadap. He arrived with his wife Shamsidar Taharin at 8am to attend the ceremony.

During the ceremony, Amirudin also took the oath to fulfil 10 pledges throughout his term in office.

These included ensuring Islam was not threatened, while respecting other faiths, defending the royal institution and obeying the sultan’s orders.

In addition, Amirudin was also made to swear to protect the special position of the Malays and the legitimate interests of other ethnic groups, to perform his duties with integrity and responsibility, to put people first, to ensure the state’s prosperity, to protect his office from being tainted by illegal actions and to ensure unity.