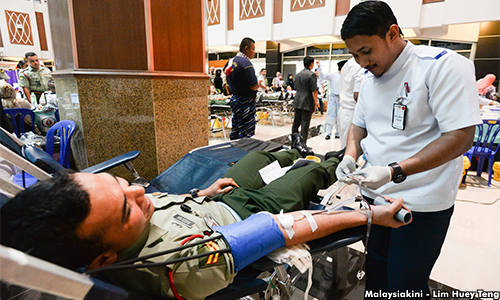 She said there were 82,619 new donors last year as compared to 76,213 recorded in 2016 and this was seen as a positive sign in meeting the needs of patients at all hospitals under the Health Ministry.

"In Malaysia, O is the most common blood type, followed by A and B and the rarest being AB blood type.

"At PDN there are two ways of donating blood. One method is whole blood donation which can be carried out every three months and the other is apheresis donation through an appointment system," she told Bernama in Kuala Lumpur recently.

Noryati said that apheresis donation was to donate specific blood components namely plasma, platelets or both, and once the components have been isolated the rest of the blood would be returned to the donor's body.

Noryati added that on the average hospitals across the country need about 2,000 units of blood per day and the demand from hospitals in the Klang Valley alone, was about 500 units a day.

However she said, ahead of the festive season and school holidays, blood supply at hospitals nationwide would drop to below the safe limit of 3,000 blood bags a day.

"PDN will ensure that blood supply is always sufficient during the festive seasons by intensifying blood donation campaigns at locations such as shopping complexes and mosques.

Noryati added that demand for blood had escalated due to increase in the number of patients, development of medical technology and availability of speciality services at hospitals nationwide.

“As such, we encourage the public to come forward to donate blood at the PDN at Jalan Tun Razak, here or at any government hospital in the country, to ensure sufficient blood supply at all times,” she said.