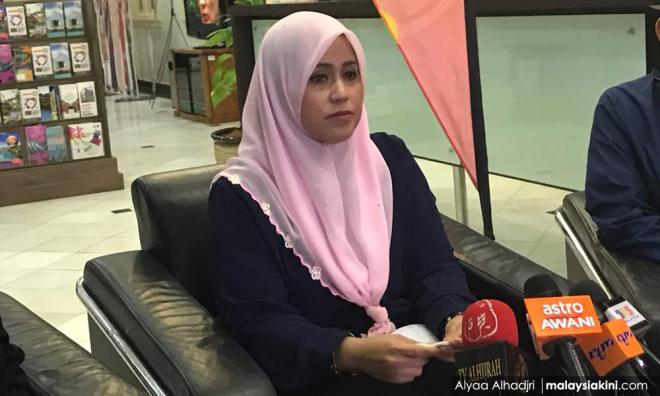 Former Puteri Umno chief Mas Ermieyati Samsudin has become the latest MP to leave the party, on grounds that the just concluded party elections was a clear sign that its members were still in denial over Umno's true state.

The two-term Masjid Tanah MP said she and her "loyal followers" would be exiting the party effective today.

In a statement today, Mas Ermieyati pledged instead to serve as an independent lawmaker, and planned to use her experience as a lawyer to keep the current Pakatan Harapan government in check.

"...With all sincerity, without any force or threat, I am announcing my exit from Umno, together with my loyal supporters, and I will be an independent MP and what that implies... to advise and admonish the government, as a check and balance' to the policies introduced."

Expressing her disappointment over the results of the polls, which saw Ahmad Zahid Hamidi elected as the new party president, Mas Ermieyati said that she sincerely believed Umno was rejected by Malay voters for having strayed from its path.

Yet, she added, party leaders are choosing to believe instead that it was caught in the crossfire of public anger against former prime minister and party president Najib Abdul Razak over the 1MDB scandal.

"June 30, 2018 was the date in which all Umno members determined the party's new direction. Here, we get to evaluate the reaction, sentiments and true attitude of the Umno members who are still exhibiting the denial syndrome.

“The hope of seeing them (Umno members) select at least 70 percent new faces of character at various levels did not materialise.

"I also believe that the current leadership still refuses to accept the fact that the rakyat had rejected Umno, instead they assume Umno was merely the victim of public hatred towards Najib… (That) the 1MDB scandal has made the Malaysian people insult Umno," her statement read.

"What manner of recovery is this if the virus is still spreading and the medicine too bitter to swallow?" she asked.

Mas Ermieyati, who did not contest for any posts in this year's polls, said she made the decision to leave the party to focus on her responsibilities in Parliament and to her constituents.

Her exit brings the number of Umno parliamentary seats down to 51 from 54. This is just four seats more than PKR in Haparan, with 47.