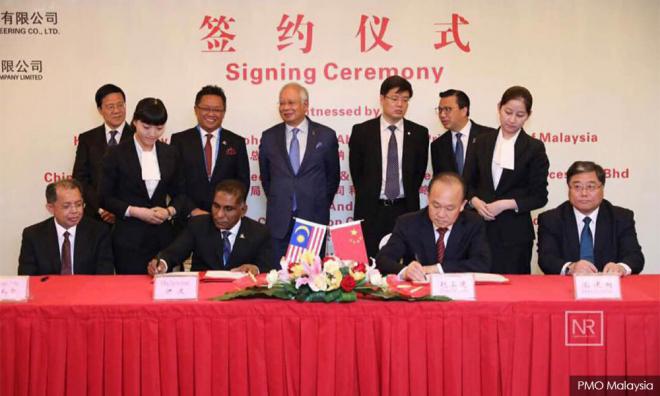 Malaysia is investigating whether part of a loan from a Chinese state-owned bank for projects worth $2.3 billion (RM9.3 billion) was used to help repay dues of a scandal-ridden state fund, a finance ministry official told Reuters.

The projects to build two pipelines were signed in 2016 by the administration of former premier Najib Razak, who courted Chinese investment but was ousted in an election in May amid allegations of corruption at the fund, 1Malaysia Development Berhad.

Najib, who was charged in connection with the investigation, has denied wrongdoing. He pleaded not guilty on Wednesday.

The Financial Times first reported the links between the loan from the Export-Import Bank of China for the pipeline projects and 1MDB.

The loan was given to Suria Strategic Energy Resources (SSER), a subsidiary of the Malaysian finance ministry which oversees the two pipelines.

The ministry official, who declined to be identified, said Malaysia was seeking Chinese government cooperation with the investigation into the loan and exploring whether funds invested in the pipeline projects could be recouped.

A ministry spokesman, asked about the loan for the projects and 1MDB, declined to comment.

EximBank and CPPB did not immediately respond to Reuters request for comment.

The new Malaysian government, led by Mahathir Mohamad, has disclosed in recent weeks how the Najib administration used federal agencies and government money to bail out debt-ridden 1MDB, which is being investigated in at least six countries.

About $500 million raised from a land sale agreement with the central bank, and about $300 million from the sell-back of shares of sovereign fund Khazanah Nasional Berhad, were used to fund a settlement amount owed to Abu Dhabi state fund IPIC.

Finance Minister Lim Guan Eng had already raised questions over the payments for the pipeline projects to CPPB last month.

He said the Najib government had paid about $2 billion, or 88 percent of the total value of the projects, despite being less than 15 percent complete.

Since taking office, Mahathir has pledged to review major projects agreed by the scandal-plagued Najib administration, saying they did not benefit the country economically.

Work on a $20 billion East Coast Railway Link, a key part of China's Belt and Road Initiative infrastructure push, was suspended on Wednesday.

Lim said on Tuesday that ECRL would only become economically feasible if there was a drastic reduction in costs.

The finance ministry official said ECRL and the two pipeline projects were suspended pending high-level talks with China to renegotiate the terms of the projects.

Lim has said he planned to visit China soon to renegotiate Chinese-backed deals.