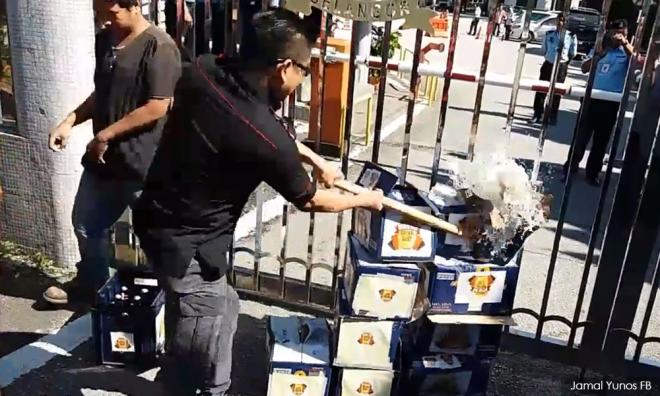 He pleaded guilty under Section 290 of the Penal Code to causing public nuisance over a beer bottle smashing stunt outside the Selangor State Secretariat building last October.

Jamal had pleaded for leniency, stating that he was merely protesting against the possibility of the Selangor government allowing the Oktoberfest beer festival to be held in the state.

RM 400 is the maximum fine imposed by the aforementioned section of the Penal Code.

On May 25, Jamal fled police custody before the bail process was completed, after he was charged for the offence at the Ampang Puteri Specialist Hospital.

He later fled to Indonesia, prompting Malaysia to request the neighbouring country to arrest him.

Indonesian police arrested Jamal on July 2 and he was extradited to Malaysia.

Immediately after arriving in Malaysia on July 5, Jamal was charged under Section 224 of the Penal Code for escaping police custody.

If found guilty, he faces up to two years’ imprisonment or a fine, or both.

Jamal is also facing several other charges, including displaying a firearm while in a disorderly state and trespassing.