On July 2, the 1MDB special investigative task force announced that more than 400 bank accounts were frozen on suspicion of receiving funds allegedly originating from the state investment fund, amounting to RM1.1 billion.

These were alleged recipients of funds from the personal bank accounts of former premier Najib Abdul Razak. Part of the sum was used to support BN in the 2013 general election.

Malaysiakini, in its latest microsite, explores some of the transactions.

Since 2015, international reports have revealed various transactions involving Najib's bank accounts amid alleged attempts by the then BN government to suppress investigations into 1MDB.

In 2016, Australian-based ABC News also reported how some of the money from Najib's bank accounts was spent. It alleged that apart from political purposes, the funds were also used for vacations and to acquire cars and jewellery.

It was into this account that US$681 million was deposited in 2013. The sum is colloquially referred to as "RM2.6 billion" based on the exchange rate when the deposits were first exposed by Sarawak Report and the Wall Street Journal in 2015.

Najib continues to maintain that the US$681 million was a donation from a Saudi royalty while the US Department of Justice, in its civil forfeiture suits, claimed that it originated from 1MDB.

Accounts involving SRC International Sdn Bhd are not covered in the microsite due to a gag order by the Kuala Lumpur High Court after Najib was charged with allegedly misappropriating RM42 million from the state-owned company. The former premier has denied the allegations. 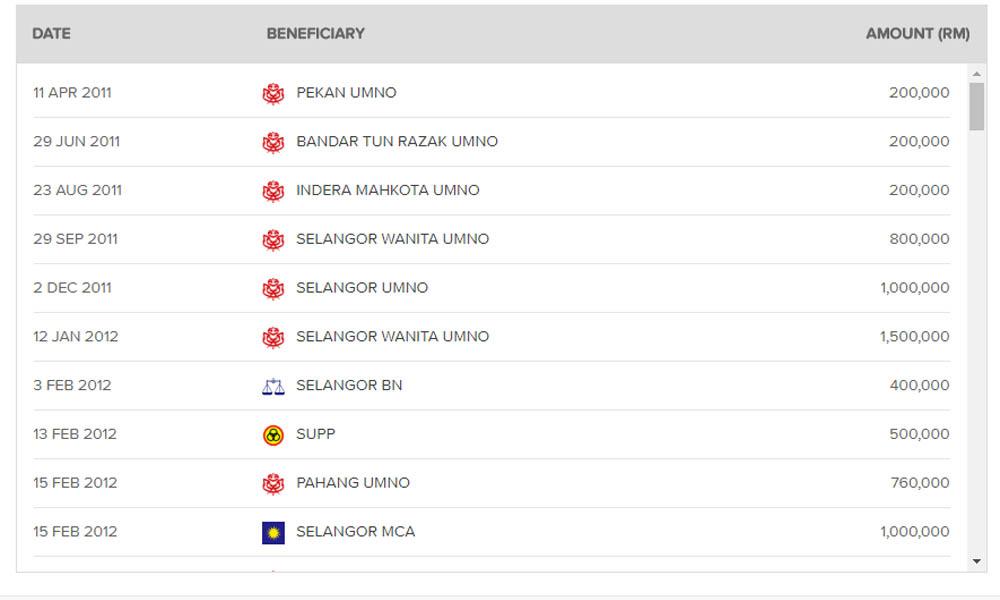 In total, at least RM470 million went to various political entities through 102 transactions, excluding individuals, between April 2012 and August 2013.

The money was distributed to various party chapters, wings and even a party-owned library.

In terms of states, political entities in Selangor were the biggest beneficiary with RM60.25 million followed by Najib's home state of Pahang with RM37.73 million.

However, the bulk of the funds went to political entities at the federal level with RM275.5 million.

Explore the transactions on Malaysiakini's microsite: "Nicked from 1MDB or Donation?: Political Hands in the Cookie Jar".