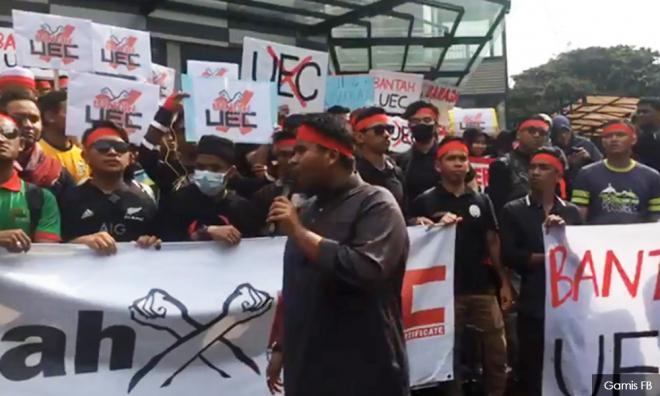 Some 100 protesters gathered in downtown Kuala Lumpur today to protest against Putrajaya's plans to recognise the Unified Examination Certificate (UEC).

"We are here today, not because we are racist, but because we want to uphold our national education system," an unidentified speaker at the rally said.

The demonstration began at Masjid Negara, but police had barred the protesters from marching to Sogo.

Utusan reported that the group then dispersed before regrouping at Sogo at about 3pm. The protest ended about two hours later.

The Malay daily quoted Dang Wangi deputy police chief Rudy Abdullah as saying that police would "investigate the true motive of the rally."

The UEC, which is issued to graduates of Chinese independent high schools, is currently recognised by local private higher education institutions and many universities overseas, as well as the Sarawak government.

In its election manifesto, Pakatan Harapan pledged that the UEC can be used for entry into public higher education institutions "provided that applicants have a credit in Bahasa Malaysia at the SPM level."