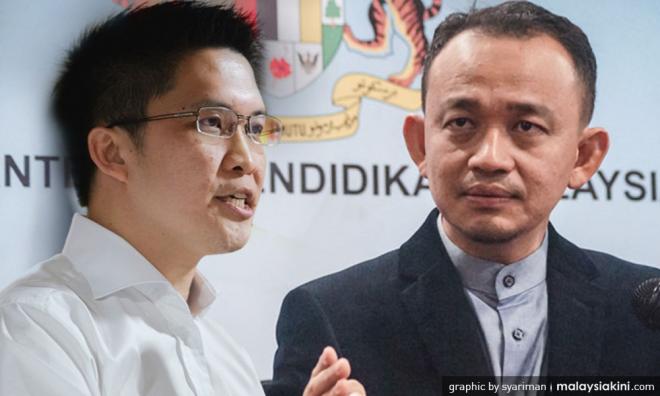 This comes after Maszlee, in a parliamentary written reply to Wee Ka Siong (BN-Ayer Hitam), said that since SMPC schools do not come under the national education system, there would be no funding for them.

In a statement this afternoon, Wong reminded Maszlee that the Pakatan Harapan government supported the SMPC and recognised the Unified Examination Certificate (UEC).

"Such an answer is regretted as it is a return to the BN era. The people, who gave the mandate to Harapan in the last general election, do not want it," added the Ipoh Timur MP.

Wong said while SMPCs are not part of the national education system, these schools played a role in educating students and this must be recognised.

He said in 2008, the then Pakatan Rakyat Perak state government allocated 1,000 hectares to nine SMPCs in order for the schools' boards of directors to generate income for the schools' operational costs, thus removing their dependence on government funding.

“At the same time, 1,000 hectares were also given to the Sekolah Agama Rakyat, which the then BN government had little concern for,” he added.

Subsequently, Wong said the practice was followed by the Sarawak government, which handed out

2,000 hectares for SMPCs in the state while the Penang and Selangor governments gave annual allocations to SMPCs.

“Clearly, the written reply given by the education minister is merely repeating the ministry's stance since the BN era and fails to reflect the reformation agenda.

“The government should not deny financial assistance (to these schools) because SMPC is not recognised as part of the national education system,” he added.

Wong said he and other backbenchers are willing to help Maszlee in resolving the issue.

Meanwhile, Bercham assemblyperson Ong Boon Piow claimed Maszlee only knew how to heed the complaints of “certain influential parents” to change the colour of school shoes and cancel paid computer classes, but does not know how to take care of Chinese educationists.

He said numerous Malay and Indian parents sent their kids to SMPCs and the UEC was widely recognised at an international level.

“Do such parents matter less than certain influential parents?” he asked.

“The education minister is from Harapan but his answer is damaging and does not respect Harapan's allies. (This move) must be criticised within Harapan,” he added in a separate statement.

He urged Prime Minister Dr Mahathir Mohamad to review whether Maszlee is suitable to continue as education minister.