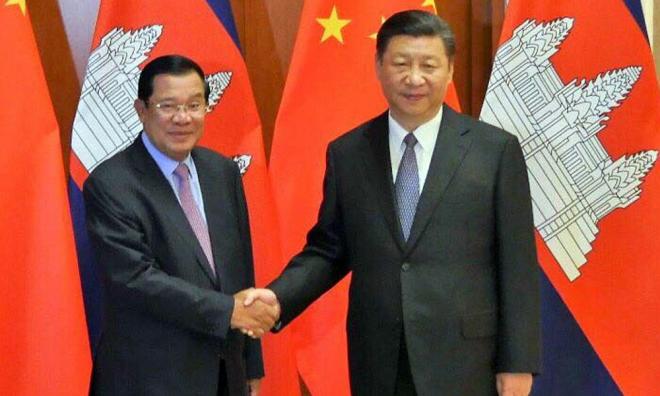 China announced a major infrastructure project in Cambodia midway through its election campaign and denounced proposed economic sanctions by the European Union on the Southeast Asian nation.

China’s ambassador in Phnom Penh also attended a ruling party rally in the Cambodian capital, according to a media report.

The flurry of moves during the three-week campaign shows China is leaving nothing to chance to ensure its most loyal ally in Southeast Asia, Cambodia’s long-time ruler Hun Sen, comfortably wins Sunday’s poll, political analysts said.

“This is a bold step for China,” said Chheang Vannarith, from the ISEAS-Yusof Ishak Institute in Singapore. “In the past, China kept a very low profile when it came to elections and domestic politics in Cambodia. This time, China is being very assertive.”

China has had a long and volatile relationship with its southern neighbor. After backing the Khmer Rouge, it fell out of favour when the murderous communist regime was deposed. Ties have become stronger in the past decade with the government of Hun Sen, who has been in power for 33 years.

“China sees Cambodia as a strategic state, one that is very important to China,” said Chheang, adding Beijing had “learned the lesson” from the surprise election defeat of Malaysia’s long-ruling coalition in May.

Malaysia’s new prime minister, Dr Mahathir Mohamad, has suspended more than US$20 billion of China-backed projects and been highly critical of some of its investment.

Cambodia has supported China’s island-building and militarisation in the contested South China Sea, and shielded Beijing from criticism by Asean, Southeast Asia’s 10-member forum of nations.

Asean members Vietnam, the Philippines, Malaysia and Brunei are in disputes with China over rival claims to the waters.

For Cambodia, China is its closest economic and political ally. Chinese capital investment into Cambodia increased from US$600 million in 2012 to $1.08 billion in 2016, according to Cambodian government figures.

Over the five year period, Chinese investment averaged half of all foreign investment.

China’s embassy in Phnom Penh did not respond to an e-mailed request for comment.

Asked if China supported the re-election of Hun Sen, foreign ministry spokesman Geng Shuang said in Beijing on Friday that the election was an internal affair but China wanted the country to “develop stably”.

“China supports the Cambodian people to choose a development path that suits their national condition, and supports and offers its best wishes for the election to proceed smoothly,” Geng said.

Cambodia’s foreign minister, Prak Sokhonn, who recently described relations between the two countries as the “best ever”, declined a request for an interview, as did senior Cambodian foreign ministry officials.

When the formal election campaign kicked off, China’s ambassador, Xiong Bo, was a guest at a big ruling party rally addressed by Hun Sen in Phnom Penh, according to the Nikkei Asian Review.

Midway through the campaign, China announced it would provide Cambodia with US$259 million in concessional loans to fund a ring road in Phnom Penh.

“No matter what the EU decides to do, China will continue to expand and deepen our cooperation with Cambodia in all fields, especially in term of trade and economic relations,” he said, according to the Phnom Penh Post.

The main opposition Cambodia National Rescue Party (CNRP) was dissolved last year and its leader jailed for alleged treason. Critics of Hun Sen have branded the vote a sham after the government suppressed independent media and dissent.

The crackdown prompted the United States and EU to withdraw funding and monitors from the election. China, in contrast, has made two funding injections into the National Election Committee and registered its own electoral observers.

Carl Thayer, an expert on Southeast Asia at the University of New South Wales, said relations between the CPP and China strengthened after the CNRP came close to winning the 2013 national elections and opposition supporters launched protests, saying they had been denied victory by electoral fraud.

“The Chinese found this unsettling and told Hun Sen that they wanted stability,” he said, citing diplomatic sources.

China’s close relationship with Cambodia’s rulers follows decades of diplomatic effort and billions of dollars of aid and investment by Western countries.

A peace deal for Cambodia’s warring factions was brokered in 1991 by Western nations, as well as Indonesia and China, and ushered in a new Cambodian constitution enshrining multi-party liberal democracy, human rights and freedom of speech.

But, as the West bristled at human rights violations and electoral irregularities in Cambodia, relations between Hun Sen and China strengthened.

“China is now heavily invested in the CPP, and the reverse is also true,” Thayer said.