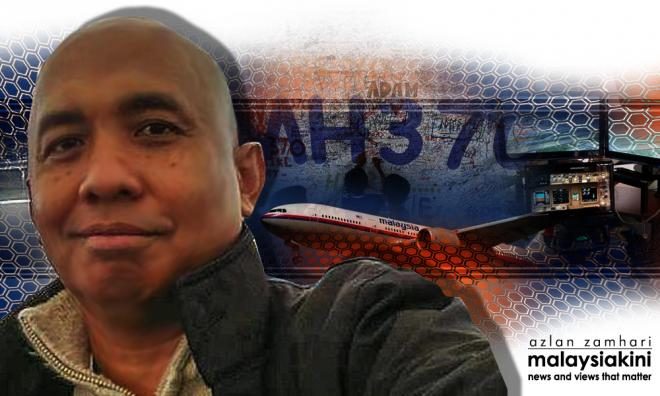 It came as a big relief for captain Zaharie Ahmad Shah's family when the Safety Investigation Report on MH370 released today showed "nothing negative" about the pilot who was flying the plane that vanished more than four years ago.

His sister, Sakinab Ahmad Shah, said she felt relieved and happy that her brother was cleared of blame.

"I’m so happy for the fact that he is cleared but at the end of the story we want the plane or wreckage to be found,” she told the media after attending the briefing report by the Malaysian International Civil Aviation Organization (ICAO) Annex 13 Safety Investigation Team for MH370 in Putrajaya today.

She said today's report proved that there was nothing negative about his character, nature of work, professional record and family conditions before flying the ill-fated flight.

“Hence all the suicidal allegations or other things, we rebut completely," she added.

MH370 piloted by Zaharie disappeared on March 8, 2014, while flying from Kuala Lumpur to Beijing.

The 777-200ER aircraft had 12 crew members and 227 passengers on board, with the bulk of the passengers being Chinese citizens.

Meanwhile, Grace Nathan, daughter of Anne Daisy, one of the passengers on MH370, urged the authorities to continue the search for the ill-fated MH370.

She said the government should consider any offers by companies who are willing to conduct the search for the plane on "no cure, no fee" basis.

“Our ultimate goal is that the search for MH370 continues to prevent such incidents happening in the future… we must remember that millions of people are flying every day. Safety is not something to be taken lightly,” she said.

Meanwhile, a relative of a crew member on board MH370 who only wanted to be identified as Fong said he was unsatisfied, disappointed and annoyed by the briefing today as it only informed the next-of-kin of something "they already knew".

“The team is unable to determine the real cause for the disappearance of MH370. What we want to know is whether the government will continue the search… we were informed we need to wait for the decision from the (transport) ministry,” he said.

Meanwhile, Intan Maizura Othaman, wife of steward Mohd Hazrin Mohamed Hasnan on MH370, said she was "surprised, mad and shocked" as the investigation team failed to answer questions by the next-of-kin during the briefing.

"It is so frustrating as nobody during the briefing can answer our questions… we hope someone comes to us and tell us what happened to MH370,” she said.