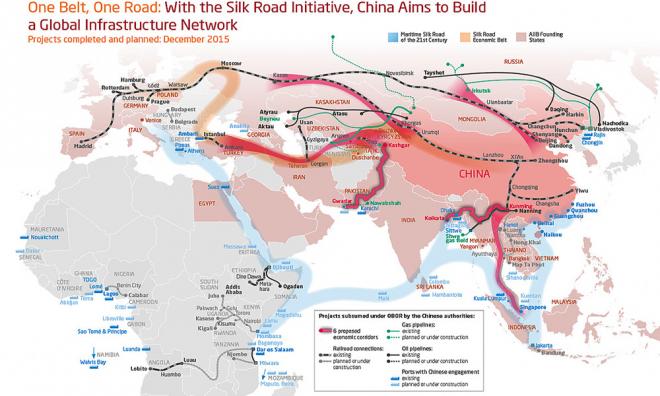 New Silk Road: Too big to ignore but pitfalls aplenty

COMMENT | China’s new Silk Road initiative is far too big for Malaysia to ignore but there are potential pitfalls. So far three corrupt regimes whose prime ministers who went overboard borrowing heavily from China have fallen – Pakistan, Sri Lanka and Malaysia.

But there are opportunities for smart partnership with China like what Singapore and Indonesia did by hammering out hard bargains with China. In fact, Singapore is the only country in the Silk Road scheme of things where China does not have any footprint in the host country. Instead Singapore is heavily investing and building mega projects on the Chinese mainland. Last year, Singapore has also overtaken the US as the biggest foreign investor in China.

Indonesia, with its archipelago of 17,500 islands, is too strategic a maritime nation for China to ignore. In fact, President Xi Jinping chose Indonesia to unveil China’s Silk Road plan on his first visit there in 2013. Indonesia has been driving hard bargains with China for its Silk Road projects by leaving the option open to borrow yen-denominated loans.

Like his counterparts in Pakistan and Sri Lanka, Najib Razak went with a begging bowl seven times in a row since he became prime minister in 2009. All three leaders have lost their jobs under a dark cloud of unprecedented corruption and recklessly borrowing from China.

China’s Silk Road is a ginormous project involving US$1 trillion in investment on the back of its mountain of foreign reserves of US$3 trillion. The road crosses at least 65 countries from China through Asia and onward to Europe.

China’s Silk Road, initially billed One Belt One Road (Obor) and later rebranded as Belt and Road Initiative (BRI), actually consists on one belt, one road, one ring and one click.

The road is curiously described as a belt running from eastern China across its poorer inland regions toward its western border and across central Asia before reaching Europe. This is essentially a new path over the ancient silk road. The road includes China’s maritime route stretching over a few oceans and seas from China to Europe, also following the ancient maritime silk road. The ring is China’s Ice Silk Road across the frozen Arctic Ocean accessing from Russia. The one click, of course, refers to Jack Ma’s Alibaba global e-trading platforms.

I cited in my book ‘The Dragon Stirs – China’s Silk Road’ that Xi Jinping’s Chinese Dream is so audacious in its geo-economics scope that the Washington-based Institute for the Analysis of Global Security is quick to notice, describing it as the “most ambitious and all-encompassing economic development project in the history of humanity”.

Goldman Sachs has predicted China’s GDP will match that of the US by 2027, in nine years’ time, and from there probably overtaking the US as the world’s biggest economy.

Within 15 years to 2015, China’s trade with Asean countries grew ten-fold to US$492 billion and this is expected to quadruple to US$1.8 trillion by 2030. China’s overseas direct investment in the Asean region grew 200 percent to US$7.8 trillion in 2014. It is also the largest trading partner in seven out of the 10 Asean countries.

But beyond China’s new geo-economics is its growing geopolitical assertiveness in the disputed Spratly Islands in the South China Sea despite the area is also claimed by Vietnam, the Philippines, Malaysia, Taiwan and Brunei.

Along this vast maritime corridor ply the Japan-based US Seventh Fleet, America’s largest, together with the navies of Japan, South Korea and India. The British Navy has also indicated its interest in sailing into the troubled seas...