LGBT activist Nisha Ayub has questioned whether it was a crime to show one's patriotism after her portrait was one of two images of LGBT activists removed from a photography exhibition at this year's George Town Festival (GTF).

Taking to Facebook, Nisha said this was not the action of the government of the New Malaysia she had voted for, and expressed concern over what message such a move was sending to the public, especially members of the already marginalised community in Malaysia.

"Did I ask my picture to be portrayed in the exhibition? No, I didn't, but I was glad to be a part of the exhibition that shows that I am proud to be a Malaysian. But now I feel as if I'm not welcomed any more in the country where I was born.

"As a citizen of Malaysia, I want to know the stand of our New Malaysia towards minorities like us. They can burn or even throw my picture (away) but they cannot take (away) my love for my country," she posted.

In her emotional posting, the LGBT rights advocate said despite being offered opportunities for a better life abroad, she chose to remain in Malaysia to continue speaking up for her community, with the hope that they will enjoy a better life.

She said that the only "crime" she had ever committed was to have declared herself a transwoman, for which she was jailed almost two decades ago.

Nisha questioned: "Is it now a crime for me to even show my patriotism to my country?"

"What is happening to our New Malaysia? Is this what we, the marginalised community, voted for? They talk about sensitivity for a certain group of people, but what about sensitivity towards others? Aren't we apart of the system? 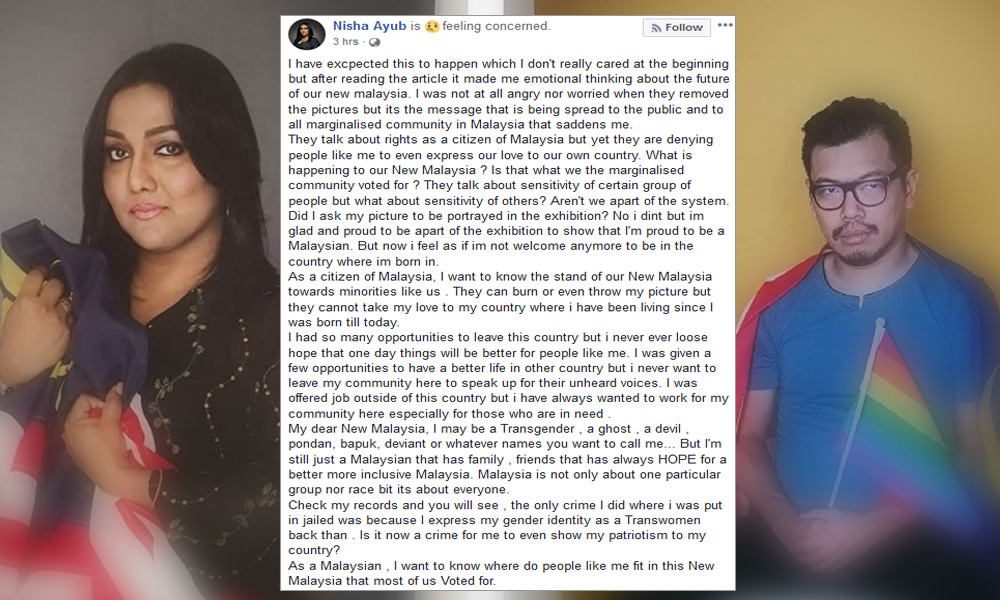 "My dear New Malaysia, I may be a transgender, a ghost, a devil, pondan, bapuk, deviant or whatever other names you want to call me... But I'm still just a Malaysian with family and friends that always hope for a better, more inclusive Malaysia. Malaysia is not only about one particular group or race, but it is about everyone."

Her post came after it was reported that Nisha's portrait, along with that of fellow LGBT activist Pang Khee Teik were taken down from the "Stripes and Strokes" art exhibition in Dewan Sri Pinang in Penang.

The month-long exhibition, by artist Mooreyameen Mohamad, was being held in conjunction with the upcoming Merdeka celebrations and was meant to showcase the nation's diversity and the Jalur Gemilang.

It was alleged the instructions to remove the images came from the Prime Minister's Officer, however, this was denied by a spokesman for the latter.

Responding to the issue, thespian Jo Kukathas also took to Facebook to call out the continuation of "hate, fear and discrimination".

"I voted for a new Malaysia – not this one. Don’t go round bullying photographers and festival organisers … and don't bully us," she stated.

Amid tug-of-war, Mujahid asks if critics want him to jail LGBT persons

Mujahid: Removal of LGBT photos in line with gov't stand