COMMENT | We are getting closer to the 100-day mark of 'Malaysia Baru' yet we feel the impact as if it just happened yesterday.

The change in government for the first time in 60 years since our independence has brought an air of freshness to our political climate and this is clearly encapsulated in the sitting of our MPs in the 14th Dewan Rakyat.

BN is warming up to its inaugural role as the leading party of the opposition while Pakatan Harapan does the same as government.

Even though Prime Minister Dr Mahathir Mohamad has more than 30 years of experience battling it out on parliamentary grounds, it cannot be denied that the 93-year-old is leading a relatively younger and newer group of MPs compared to the opposite side of the bench.

The 14th Dewan Rakyat has witnessed the swearing in of 90 first-time MPs, and about 66 percent of them are from Harapan.

The median age of the current Malaysian MPs stands at 55.5 years old - not much different from that of 56 in the former Dewan Rakyat.

This could be partly due to the extremes at both ends. After all, we have the youngest and the oldest ever MPs at the same time on the same side of the political divide.

The former is P Prabakaran, a 22-year-old law student and the latter is none other than Mahathir himself. However, amidst the presence of the nonagenarian, more than half (57 percent) of Harapan MPs are below the median age but the other way round for 61% of the BN MPs.

So, when 25-year-old Syed Saddiq—a first-time MP—took his first additional question in Parliament from the opposition's 62-year-old Annuar Musa for the first time, it was reflective of the new Dewan Rakyat.

More importantly, it was reflective of how old (and young) both sides of the political divide are. 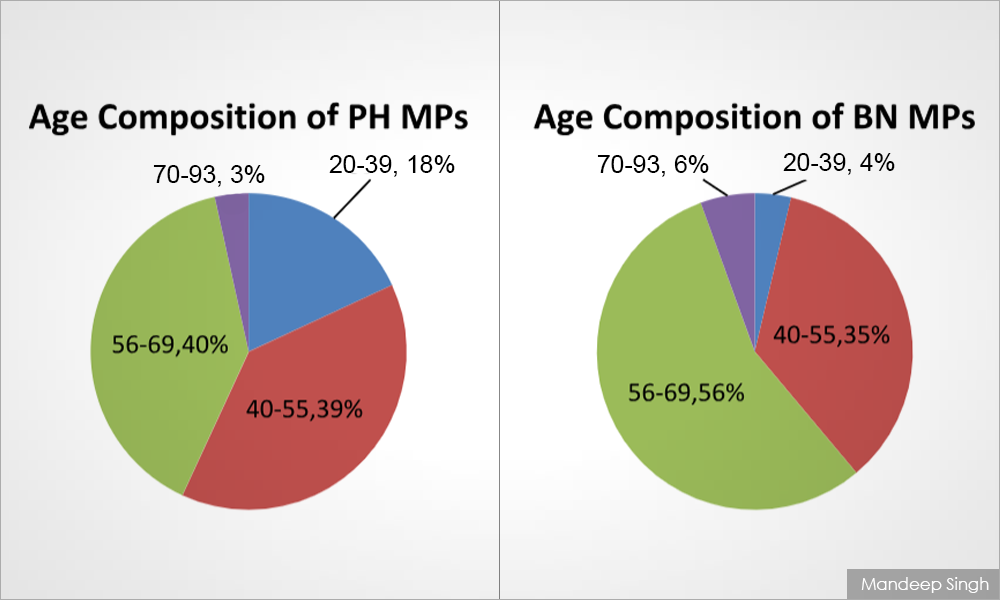 In other words, this Parliament has three generations in the house - sons, fathers and grandfathers.

The youth have been attributed as a key factor in this wind of change.

Soekarno, the former Indonesian president, once quoted, "Give me 1,000 people and I will move a mountain. But if you give me 10 young ones, I will shake the world".

About 40 percent of the electorate for the general election were between 21 and 39 years old and according to Syed Saddiq, 80 percent of them had voted for Harapan and PAS. Even for Syed Saddiq himself, more than half of his votes came from the youth.

Indeed, Malaysians under 40 have made great inroads into this new Parliament.

They have taken up 12 percent of the seats, an increase from the previous nine percent. This is a positive sign as we edge closer to the latest global average of 14.2 percent. 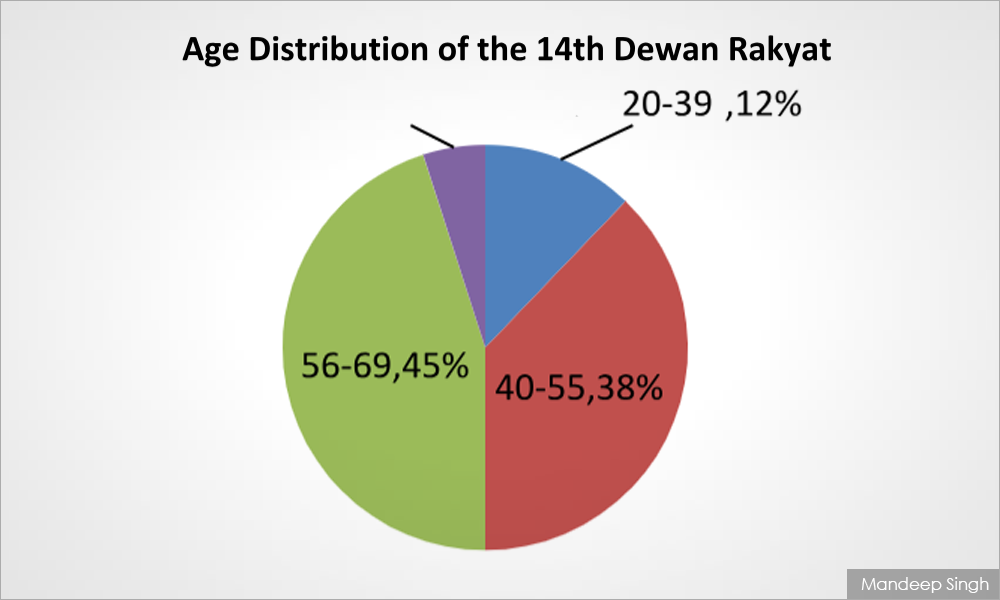 In return, Mahathir has rewarded the youth with a lot of faith, appointing Syed Saddiq as the nation’s youngest minister.

If Soekarno needed 10 young ones to shake the world, Mahathir has 22 of them on his side. Only another six are from the opposite side of the bench.

However, this cannot masquerade the fact that the youth is still underrepresented.

Only two out of 222 MPs are aged below 30. That means most of the young MPs we have are in their late youth.

Youth unemployment remains high at 10.7 percent. Cost of living is increasing while the average salary for fresh graduates is getting stagnant at between RM1,800 and RM2,600.

According to Bank Negara, the most vulnerable group of borrowers to default on their debt are within the age bracket of 40 years and below. The economy is at the top of the list when it comes to the youth's concerns.

Our youth MPs must be able to reflect the concerns of their electoral peers and debate about them in Parliament.

Yet with the proportion of youth MPs so one-sided, it is difficult for the new opposition MPs to uphold themselves and play a credible check-and-balance role when it comes to issues affecting the youth.

Furthermore, with the young and old in the house, the intergenerational gap remains a subtle problem.

According to intercultural specialist Asma Abdullah, Malaysia is often cited as a country with the highest power distance.

Our paternalistic culture subjugates the young to be subservient to the old. Often enough, any contradicting opinions raised by the young will be considered as disrespectful to the old.

This could come across as an odd scenario for our youth MPs, especially when many of them are new to the provocative and hostile atmosphere of the Dewan Rakyat.

The youth is not all the Parliament lacks. The more stark inequality is in the representation of women.

Despite the Sustainable Development Goal on gender equality, we have six times more men than women MPs, falling short of the 30 percent mantra both parties often chant. 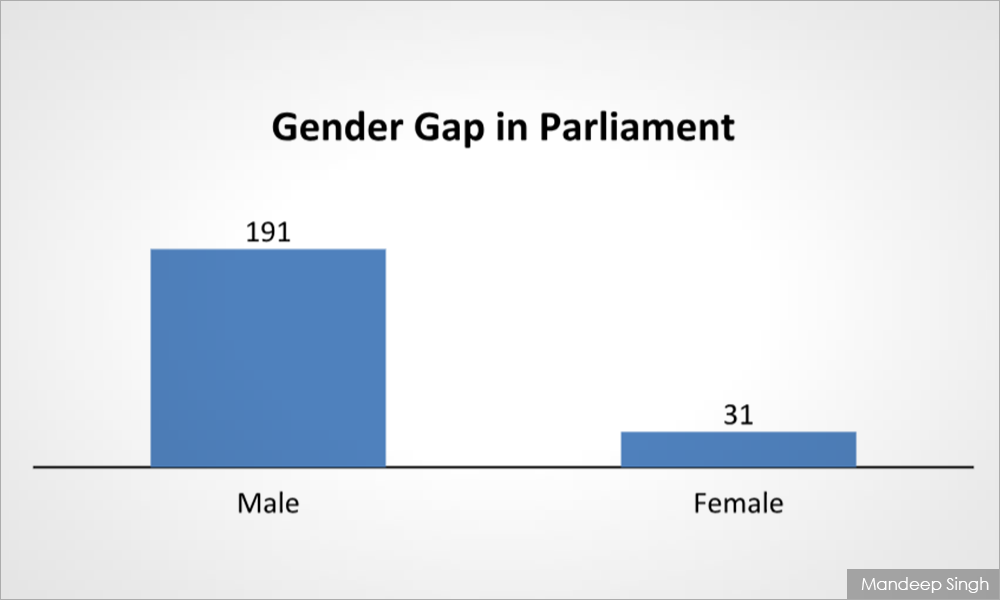 Although the gender imbalance is less pronounced among younger MPs, we still fell short of the 60:40 ratio of young men to women participation held as international standards.

The house is lacking mothers and daughters.

Once more, the women participation in the Dewan Rakyat is lopsided in favour of the government. A whopping 65 percent of the women MPs are in Harapan— five of them being ministers and three are deputy ministers. 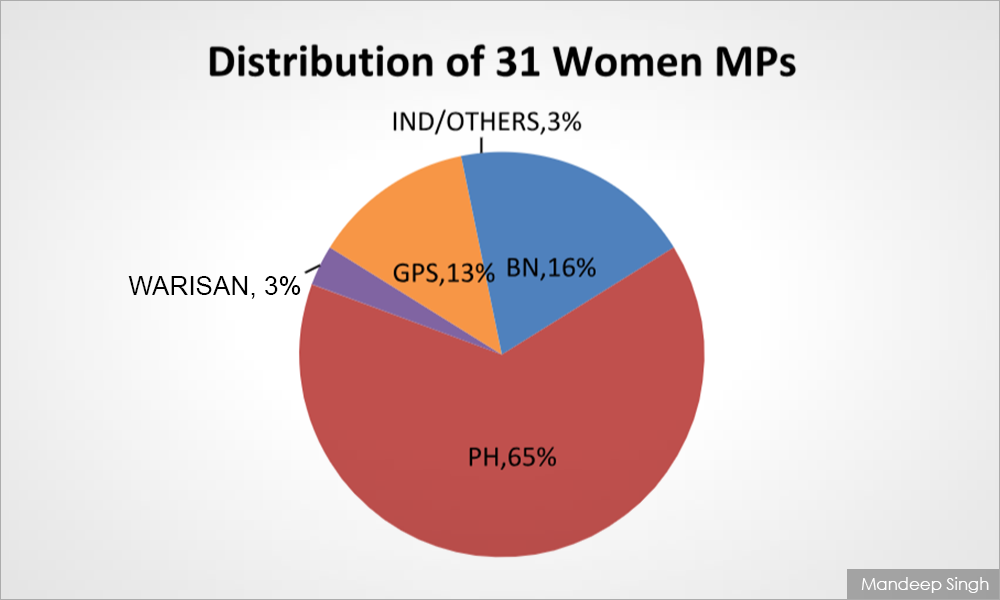 Just like the issues on youth, it will be difficult to find a nuanced debate on women’s rights in Dewan Rakyat amidst it being a contentious matter worldwide.

In February, Malaysia was under scrutiny again for its poor review by the UN’s Convention on the Elimination of All Forms of Discrimination Against Women (CEDAW).

Issues on female genital mutilation (FGM) or cutting, whipping, polygamy, sexual harassment and unequal inheritance were questioned and such discourse has been absent from the Parliament long enough.

Appointing more female ministers is a laudable move but this has to translate into urgent attention being paid to women’s rights. The new Harapan government needs to fix this poor record immediately.

There are still gaps to be filled in this new Parliament and providing a proper leadership will be a good start.

Malaysians need leaders that they can look up to. It is time for our MPs to hear the voices of the rakyat and leave no one behind. After all, we finally realised that the people do vote for change.

Mandeep Singh is from the Centre for Public Policy Studies.