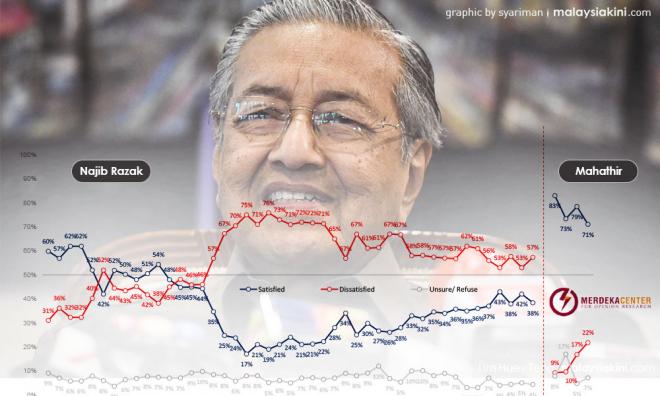 The pollster, however, noted that his rating dropped 12 percent during the period between May 31 and Aug 11.

Despite this, Mahathir outperformed his predecessor Najib Abdul Razak, whose highest rating following the 13th general election was 62 percent between June and August 2013. Prior to GE14, Najib's rating was a dismal 38 percent in April.

The Merdeka Centre survey also showed that Mahathir ranked highly among non-Malay voters with Indians at 93 percent and Chinese 83 percent, while Malays polled at 62 percent.

The 93-year-old politician, who is serving his second tenure as premier, having headed the nation for 22 years from 1981 to 2003, polled evenly among urban and rural voters in East and Peninsular Malaysia as well as those from various income and age groups.

He also scored highly among government and GLC staff at 81 percent.

Country moving in the right direction

Meanwhile, the Harapan government was also ranked positively by more than two-thirds of the respondents, at 67 percent.

The pollster revealed that while 64 percent of the voters polled felt the country was "going in the right direction" in matters concerning leadership and current issues following the May 9 general election, this number had ebbed to 55 percent by August.

This period also saw the percentage of those who felt the country was moving on the wrong track increase from just 12 to 24.

This was in particular among Malay voters, which saw sentiments slide to below 50 percent for the first time since GE14, "likely over continued economic concerns and heightened use of race and religious rhetoric by the opposition".

The highest satisfaction rating, meanwhile, came from the Indian community, at 75 percent.

There was also a discrepancy between the highest and lowest income groups, with up to 68 percent of those with a monthly income exceeding RM7,000 felt that Malaysia was on the right track while only 47 percent of those earning below RM2,000 agreed.

The survey indicated that this dip in the overall numbers could be due to the "dissipating euphoria" from the general election results and "natural friction" as expectations encounter reality as the new government implements its promises and deals with current issues.

Also, the last time the country ranked positively with voters in terms of direction was prior to December 2013.

The survey involved 1,160 voters through a random stratified sampling method that matches the national demography and was conducted from Aug 7- 14.