Pope Francis said on Sunday he would not respond to a former top Vatican official who accused him of having known for years of allegations of sex abuse by a prominent US cardinal, calling on the pontiff to resign in an unprecedented broadside against the pope by a church insider.

Francis, speaking to reporters on the plane returning from a trip to Dublin, said dismissively that a statement containing the accusations “speaks for itself.”

In a detailed 11-page bombshell statement given to conservative Roman Catholic media outlets during the pope’s visit to Ireland, Archbishop Carlo Maria Vigano accused a long list of current and past Vatican and US Church officials of covering up the case of Cardinal Theodore McCarrick, who resigned last month in disgrace.

In remarkably blunt language, Vigano said alleged cover-ups in the church were making it look like “a conspiracy of silence not so dissimilar from the one that prevails in the mafia.”

“Pope Francis has repeatedly asked for total transparency in the church,” wrote Vigano, who has criticised the pope before.

The statement, which contained no supporting documents, was the latest blow to the credibility of the US Church. Nearly two weeks ago, a grand jury in Pennsylvania released the findings of the largest-ever investigation of sex abuse in the US Catholic Church, finding that 301 priests in the state had sexually abused minors over the past 70 years. 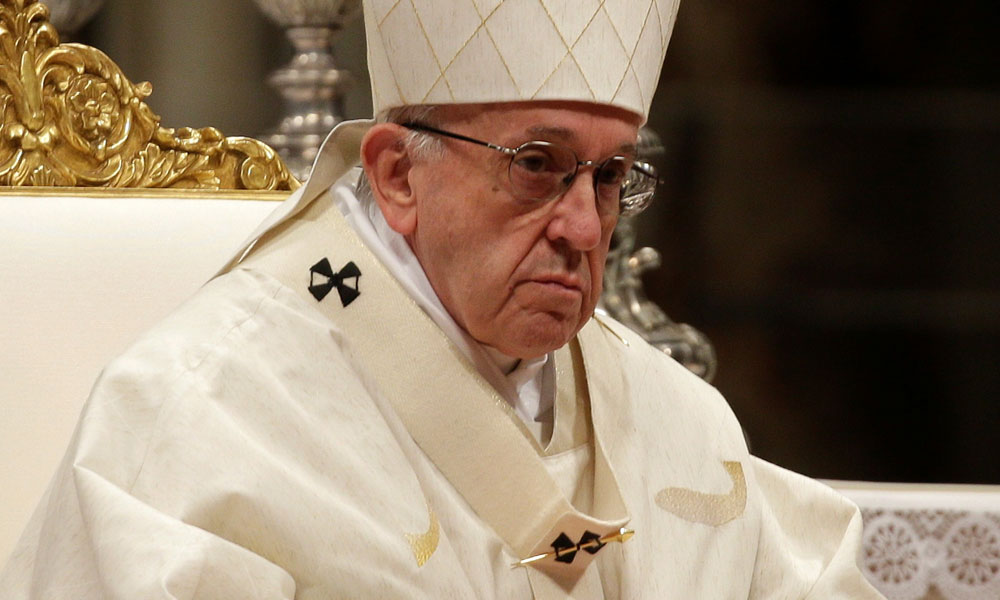 On the plane returning from a trip to Dublin, reporters asked the pope about the statement, which was published by the National Catholic Register and several other conservative media outlets in the United States and Italy.

“I will say sincerely that I must say this, to you (the reporter) and all of you who are interested: Read the document carefully and judge it for yourselves,” he said.

“I will not say one word on this. I think the statement speaks for itself and you have sufficient journalistic ability to reach your own conclusions,” he said.

In his statement, Vigano said he had told Francis in June 2013, just after he was elected pope by his fellow cardinals, about the accusations against McCarrick.

Vigano, the papal envoy in Washington from 2011 to 2016, also said he had informed top Vatican officials as early as 2006 that McCarrick was suspected of abusing adult seminarians while he was a bishop in two New Jersey dioceses between 1981 and 2001. He said he never received a response to his 2006 memo.

He also accused McCarrick’s successor as archbishop of Washington, Cardinal Donald Wuerl, of having been aware of the abuse allegations. Wuerl has said he did not know of them.

In a statement, the Washington Catholic Archdiocese said: “In spite of what Archbishop Vigano’s memo indicates, Cardinal Wuerl did not receive any documentation or information during his time in Washington regarding any actions taken against Archbishop McCarrick.” McCarrick (photo) in July became the first cardinal in living memory to resign his position in the church leadership after a review concluded that claims he had sexually abused a 16-year-old boy were credible.

He was one of the highest-ranking church officials accused of sex abuse in a scandal that has rocked the 1.2 billion-member faith since reports of priests abusing children and bishops covering up for them were reported by the Boston Globe in 2002.

Since then, patterns of widespread abuse of children have been reported across the United States and Europe, in Chile and Australia, undercutting the church’s moral authority and taking a toll on its membership and coffers

McCarrick, 88, has said he had no recollection of alleged abuse of the minor, but has not commented on widespread media reports that he would force adult men studying for the priesthood to sleep with him at a beach house in New Jersey.

Vigano’s statement railed against “homosexual networks present in the church” - the word “homosexual” appears 18 times, while the word “child” appears only twice, in both cases in the titles of church documents Vigano cites.

Francis asked for forgiveness on Sunday during his highly charged visit to Ireland for the “scandal and betrayal” felt by victims of sexual exploitation by Catholic clergy. On Saturday, he said the corruption and cover-up of abuse amounted to human excrement, according to victims.