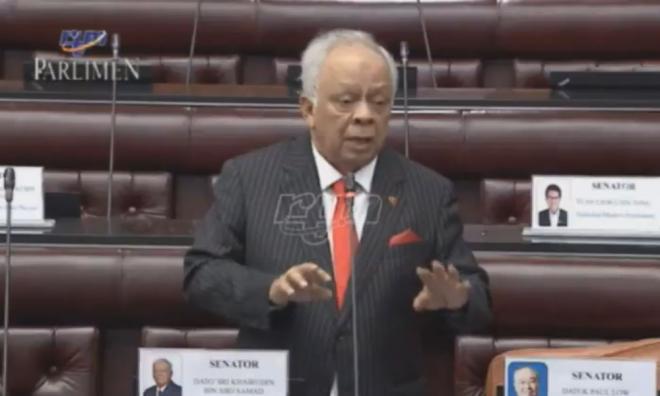 Senator ropes in 'Angry Bird' in empathising with transgenders

PARLIAMENT | A BN senator roped in the popular game 'Angry Birds' in empathising with the difficulties faced by transgender people.

Khairudin ES Abd Samad hoped that the current administration would resolve these problems.

During the tabling of the motion of thanks on the royal address in Dewan Negara today, the senator said he would not use a urinal if a female cleaner was present and it would be even more awkward if a transgender person was to urinate next to him.

"Imagine it happening like this: Us standing at a urinal bowl while a woman is standing next to us, doing the same thing. Imagine. Why is that person urinating while standing up? This can be a problem.

"So they (transgender persons) would go to the female toilet. But once inside, the toilet users would shout 'aiyo! aiyo!' The women would run out," he said.

Following the meeting, Mujahid urged Malaysians not to discriminate against transgender people and treat them with basic courtesy.

Although Khairudin did not offer any solutions, he said that he hoped the minister would resolve certain issues, such as toilets for transgender people.

"I sympathise... I wasn't there at the meeting, but I think when the toilet issue was raised, it was about preventing women from screaming when they use the female toilet and preventing men from lining up in front of a toilet (when it is used by transgender people)," he said.

"We talk about this issue so that we and the rakyat can understand. Sometimes transgender people are born with an 'Angry Bird' that is like a sparrow. The 'Angry Bird' is small. Their female hormones (estrogen level) is high. They don't want it that way. It is nature," he added.

The senator said sometimes, men are raised by women and tend to be effeminate, citing how he had to train his only son to be masculine in a family where there were six women.

"Some (who are transgenders) learn to cook, do laundry or watch their mothers give birth. We have to accept this fact. Not every human wants to be the way they are. Sometimes, it is decided by God," he added.