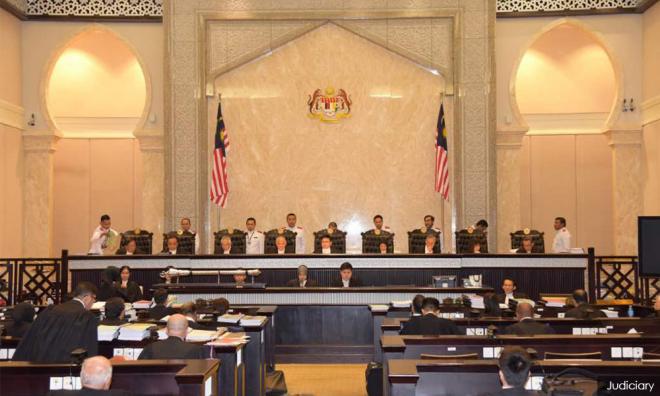 The court allowed the media to take photographs of the Federal Court bench before proceeding to hear the matter at about 9.30am.

Prior to this, the newly appointed chief justice had said that a nine-member bench would hear constitution-related matters.

In the past, a bench of seven members was the maximum number that had heard such cases in the Federal Court.

Today's case involved a civil lawsuit filed in 2013 by KFH against JRI Resources for recovery of an outstanding amount of RM118,822,066.59 due to the Finance House for four Ijarah Facilities Agreements and one Murabahah Tawarruq Agreement entered between them in 2008 and 2009.

The question referred for the Federal Court's determination was whether sections 56 and 57 of the Central Bank of Malaysia Act 2008 (CBMA) were constitutional for impinging on judicial powers as the sections stated that rulings by the Syariah Advisory Council (SAC) bind the Civil High Court.

JRI Resources' lawyer Malik Imtiaz Sarwar submitted that by virtue of those provisions, the role of the SAC goes beyond the function of ascertaining Islamic law.

"Thus, by compelling the High Court to refer questions of Syariah to the SAC and then binding the High Court with the rulings of the SAC, these provisions effectively usurp judicial function and power," he said.

Meanwhile, lawyer Yoong Sin Min, representing KFH, said the role of the SAC was merely to ascertain whether the transaction complied with the Islamic Syariah law and did not decide on the commercial dispute.

The Association of Islamic Banking Institutions of Malaysia (AIBIM) and Bank Negara Malaysia (BNM) were made interveners in the proceedings.

Malanjum reserved the court's decision after the parties completed their submissions before the court.