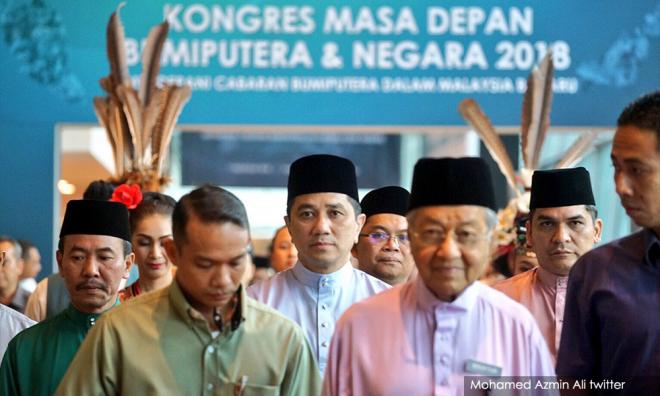 Yoursay: The truth is, even non-Malays can’t compete with PRC Chinese

YOURSAY | Mahathir is confusing the real issue with another distracting issue.

Vijay47: Looking at recent events, I cannot help being reminded about the movie "Groundhog Day" and the Malays being caught in a time loop, condemned to repeat their miserable lives over and over again.

Every so often, Malay organisations, like Umno and now increasingly Pakatan Harapan, come up with events to grandiosely chart Malay destiny and for sure, the gathering will be dressed up in fancier and fancier words, the flavour this time being “progressive, values, ethics and integrity”.

We have all heard this before - a hundred times, a thousand times before. But nobody wants to bell the cat, nobody wants to say the tough raw truth the Malays need to hear, that it is long past the time to be pampered and spoiled, to be given crutches that have now replaced legs.

Nobody wants to make withdrawals from the vote bank. And we all know how these events will end; after all those swashbuckling speeches about Malay ‘ketuanan’, how Malays ‘tidak akan hilang’, it will be time for further gifts and grants, more artificial limbs and wheelchairs.

Over at the other side of town, their cousins will be foaming at the mouth, ranting and raving about how the non-Malays have usurped their divine position and are now threatening the very survival of Islam and the Malays.

Nobody seems alarmed that many of the speeches have gone deep into sedition, challenging public peace and security. Nobody asks that elephant-in-the-room question – if you are safeguarding us, why are the rich all linked to political leadership, and why are these rich so filthy rich?

From the very start, this Future of Bumiputeras and the Nation Congress reflected very unhealthy and even dangerous facets.

Was it necessary for the government itself to hold an event devoted exclusively to one race where the concerns and interests of others are completely disregarded? What makes this bumi congress especially grating is that it comes just after we were all fed full on a ‘Satu Malaysia’ diet.

Would PM Dr Mahathir Mohamad be equally gracious and host a similar forum for the Indians, Chinese or the East Malaysians?

Secondly, what was the purpose of suddenly raising the spectre of three million Chinese arriving at our doorsteps? Did somebody say that it was somehow in the pipeline? This was nothing but Umno’s standard rallying cry of “The Malays and Islam are under attack” repackaged in Mahathir-wrapping paper, a most regrettable display of rabble-rousing.

Thirdly, Mahathir, you openly and almost proudly admit that after about 50 years of a mollycoddling racist economic policy, the Malays are still backward and given to slaughtering the golden goose for quick rewards.

So what are you going to do about it - continue this a few lifetimes more? Granted that a select few make it to become billionaires. I think you should realise, at least now, Mahathir, that if you really want to help the Malays, you should stop helping the Malays.

Anonymous 1470491491148271: Perhaps many of the naysayers against Dr M's position have some form of vested interest in welcoming the mainland Chinese (or foreigners in general) and hope for their own personal gain that more foreigners will come and "invest" (this word carries a whole array of different interpretations) here?

Isn't it obvious to ordinary Malaysian folk (those without interest in properties, businesses or other forms of investments), the undesirable social impact that will likely follow suit should hundreds of thousands of mainland Chinese move here?

This is Malaysia and as a citizen who cherishes all the wonderful attributes of being a Malaysian, I would not hope for our social fabric to be drastically altered by foreigners - particularly so when mainland Chinese/foreigners come and choose not to assimilate into our local ways.

There are plenty of mainland Chinese/foreigners in Johor. Sadly, some, if not many of them, are arrogant as they look down on Malaysians (they view themselves are more superior).

They show little regard for our Malaysian culture and continue to behave in the same manner as in their home country, for example, speak very loudly in restaurants, drive dangerously like maniacs on the roads, try to outdo you when lining up wherever, to name a few examples.

You will see many mainlanders strutting around Johor Premium Outlets (JPO) in a stuck-up fashion as they dangle their money to local sales personnel. I have also heard about mainland Chinese snapping up land (not Forest City) and how they see Malaysians generally as having to rely on bank loans to purchase properties whereas they can use cash.

Perhaps for them, everything under the sun can be sold for money. But for us, our country's sovereignty, unique identity and dignity are not for sale. I dread the thought of feeling like a minority in my own country and pray that day will never come.

Kim Quek: Mahathir is confusing the real issue with another distracting issue. The real issue is on Chinese nationals buying properties in Malaysia.

But instead of giving a straight answer, he muddled it by scaring the Malays with the daunting picture of millions of highly competitive Chinese nationals coming on shore to squeeze them out economically.

Let me give the straight answer to the real issue. The answer is yes, Chinese nationals can buy properties in Malaysia just like any other national, as long as the purchase complies with Malaysian laws and rules – unless Malaysia legislates a new law singling out Chinese nationals for exclusion from such property acquisition.

Regarding the distracting answer of the influx of millions of Chinese immigrants, this is sheer scare-mongering, as buying property does not entitle the purchaser to citizenship or permanent residence status.

As for competition from Chinese investors, why should they be any different from any other country?  Shouldn’t all foreign investors who benefit this country be welcome?

As prime minister, Mahathir must be careful with his words. His misguided outbursts, both against “the Kuantan Great Wall” and the Forest City project, have already triggered high alarm across China, and his current Chinese economic invasion scare would only reinforce his anti-China image.

At a time when we have not as yet restored foreign investors’ confidence, save perhaps China, such irresponsible tantrum from the PM could shut off our scarce source of foreign direct investment (FDI), making our economic recovery even more arduous.

Gerard Lourdesamy: As for the bumiputera agenda, what is wrong in empowering nearly 65 percent of the population? Most of them are in the B40 group.

What should be done is to avoid the excesses of the past where only an elite group of Umno-connected Malays benefited at the expense of the poor and less educated Malays.

The Harapan government has stated that inter-ethnic and intra-ethnic income disparity will be addressed. This means that economic assistance would be given on a needs basis. When the pie is large enough, as Malaysians we have an obligation to share.

Why simply denigrate entire ethnic groups simply based on prejudice? Equality does not mean that everybody is treated the same. What is required is equal treatment within a defined class or group. Equal opportunities must be available in both the public and private sectors.

Discrimination based on race, religion, gender, age, disability, sexuality and nationality must cease, save and except where there is affirmative action to protect a defined class or group. Affirmative action is an important tool to assist in social engineering and to address imbalances within and without ethnic groups in the country.

While the New Economic Policy (NEP) has largely succeeded in creating a successful Malay middle-class, the inequality and income disparity is now large within the bumiputera community. Mostly due to the corruption and patronage of Umno.

But these privileges cannot be indefinite since they will breed distortion within the economy and make us less competitive. There must be a time limit.