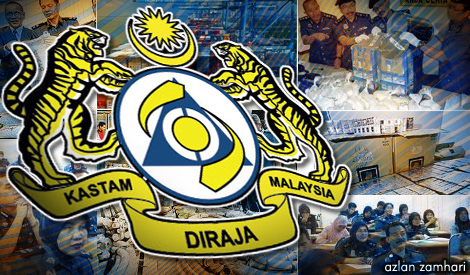 The Royal Malaysian Customs Department successfully foiled an attempt to smuggle in cigarettes and alcohol worth RM10 million with unpaid duty after it detained two containers in Port Klang on Sunday.

He added that a check of the first container found 10.5 million cigarette sticks of the brand U2 Full Flavor worth RM8 million with unpaid duty.

“A check of the second container found 1.8 million cigarette sticks of the brand DinX and 2,600 litres of alcohol worth RM2 million with unpaid tax,” Zulkifli said in a press conference at the Kuala Lumpur Federal Territory Customs Complex in Petaling Jaya today.

“A check of the items and documents presented by the two drivers found that the declared items were not the same as those found in the containers which left North Port using a manifest that stated used auto parts,” he said.

Zulkifli said the cigarettes were believed to have been smuggled from Vietnam to be sold in the Klang Valley.

Both the men have been remanded until today to assist in the investigations under Section 135(1) (e) of the Customs Act 1967 for transporting contraband goods, he said.

Zulkifli assured informants that their identities would not be revealed and they would get cash rewards for every information which produced successful results.