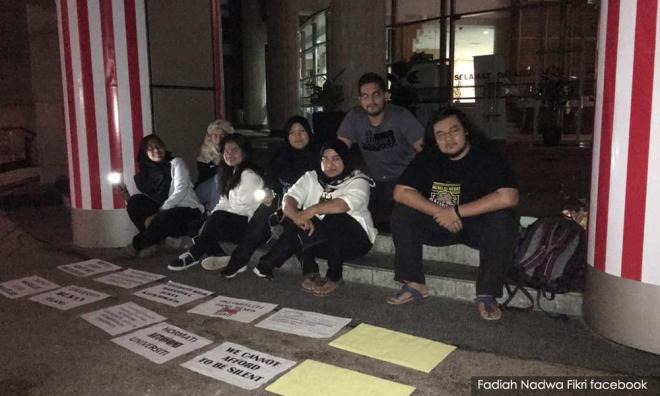 Two students activists involved in a sit-in protest in front of the Education Ministry in Putrajaya were arrested in the early hours of this morning.

The students were part of a small group staging a protest there yesterday to demand the immediate stepping down of Education Minister Maszlee Malik as president of the International Islamic University Malaysia (IIUM).

Activist lawyer Fadiah Nadwa Fikri posted about the arrests this morning on Facebook, stating the two students were arrested for trespassing.

"Shame on you Maszlee Malik," she posted.

Meanwhile, Maszlee took to Twitter this morning, saying that the students have been released and that he would be investigating what transpired.

"I am looking into why they were arrested as I have informed authorities not to arrest participants of this peaceful protest.

"This is as I believe that by allowing students to gather and demonstrate peacefully, that would be the first proof we value freedom and the Pakatan Harapan commitment to uphold democracy," the minister said in a series of tweets.

He added that he had, however, requested the protest not be held inside the ministry building as it concerned the safety of ministry staff.

Maszlee's appointment as the president of the university drew controversy when it was revealed on Sept 4 as many quarters pointed to the possible conflict of interest and said it contradicted Pakatan Harapan's election manifesto.

Harapan had promised to restore academic freedom at tertiary institutions.

However, Maszlee denied this, stating that the institution was not bound by the Universities and University Colleges Act 1971 (AUKU) and had its own constitution.

He stated that IIUM's board members comprised ambassadors or representatives from other countries, while the ceremonial powers of the presidency were normally given to somebody that represents the government of Malaysia, and was not accorded a salary.

Even so, Maszlee said he would consult with the Sultan of Pahang Sultan Ahmad Shah, who appointed him for the role, and Prime Minister Dr Mahathir Mohamad.

IIUM, too, defended the appointment saying that Maszlee is well-versed in the university’s inner workings as a former lecturer and he has agreed to serve his three-year term without remuneration.

When contacted, Asheeq said he would be issuing a statement soon.