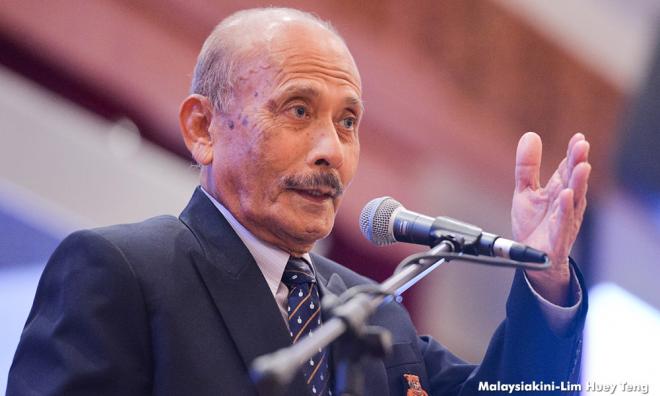 Former inspector-general of police Hanif Omar claimed that the alleged proposal by DAP to split Peninsular Malaysia between the Malays and non-Malays was detailed in a Special Branch intelligence report sent to him.

In an interview with Sinar Harian, Hanif said a DAP leader made the proposal in Europe after the May 13, 1969, riots, and he had received the reports in his capacity as police chief of staff in the National Operations Council (Mageran).

"The information came to me through the police Special Branch. At the time, Mohamed Salleh Ismail was the IGP.

"He gave a briefing to Mageran every week, but if there was something important, before the briefing they (the Special Branch), would send the report to me.

"I also reported it to (then prime minister) Abdul Razak Hussein," he was quoted as saying by the Malay daily.

Hanif did not name the DAP leader, but he was previously reported as saying that he had locked up party veteran Lim Kit Siang for two years after the proposal to divide the peninsula was allegedly made.

Lim has denied making such a call, and his lawyer is expected to file a defamation suit tomorrow, as Hanif has failed to apologise on the matter.

However, Hanif clarified that what he meant in his speech was that he ordered Lim to be arrested during the 1987 Ops Lalang, not following the May 13 riots.

"In my speech, I was talking about communism, and then racism, and when it started. Malays and Chinese never fought before that.

"In 1987 there was Ops Lalang, Lim was among those I ordered to be detained when I was IGP. That is what I meant, not that I ordered him detained in 1969," he said.

Hanif said his speech at a Universiti Teknologi Mara (UiTM) event last week was not aimed at smearing DAP, but that he was just sharing his experiences during his time in Mageran.

The former top cop also brushed aside Lim calling him senile and said that he had no personal problem with the Iskandar Puteri MP.

"After he got out of detention, I had an open house and he came to my house. There is no personal problem, I have no problems with anyone," he said.