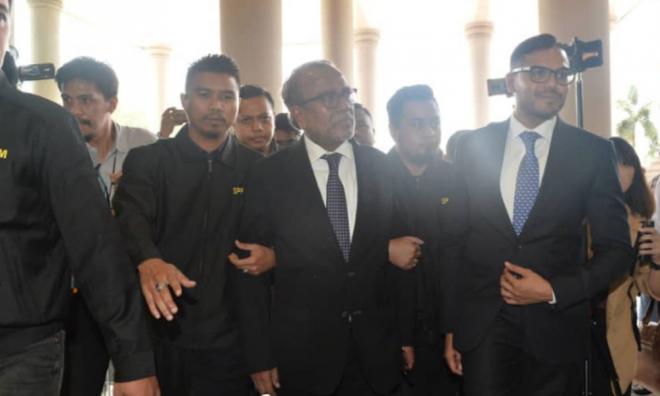 Muhammad Shafee Abdullah, who is former premier Najib Abdul Razak's lawyer, has accused the authorities of victimising him.

The senior lawyer reportedly made this remark as he was led into Kuala Lumpur Sessions Court this morning to face two counts of money laundering and two counts of making false statements.

He pleaded not guilty to all four charges. The court set bail at RM1 million with two sureties.

According to the charge sheet, Shafee was alleged to have engaged in two counts of money laundering activities by receiving proceeds from illegal activities amounting to RM9.5 million.

The sum was allegedly transferred to Shafee in two tranches from a bank account belonging to Najib.

If found guilty under Section 4(1)(a) of the Anti-Money Laundering, Anti-Terrorism Financing and Proceeds of Unlawful Activities Act 2001 (AMLAPAU), Shafee will face a maximum jail term of five years, a fine of up to RM5 million or both.

Shafee also faces two counts of violating the Income Tax Act 1967 by omitting the income received from Najib in statements made to the Inland Revenue Board on two occasions in 2015.

If found guilty, Shafee can be jailed up to 15 years and fined not less than five times the value of the sum involved in the offence or RM5 million, whichever is higher under AMLAPAU.

Shafee also had to surrender two passports, one of which he later said in a press conference was a diplomatic passport given to him by the previous government as an ambassador-at-large.

He added that although the passport was still valid, he had received a letter from the Foreign Ministry last month instructing him to cease using the passport as he was no longer an ambassador.