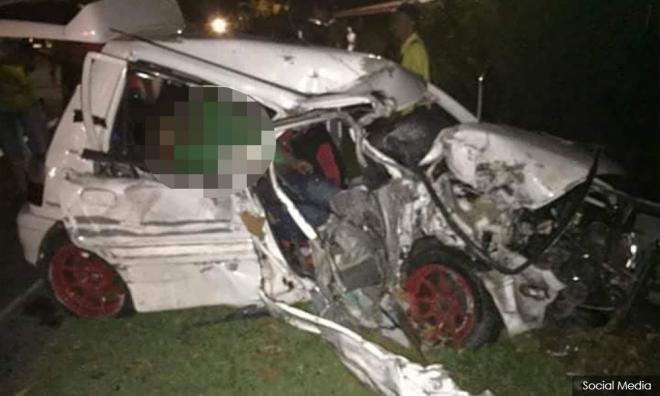 A couple and a policeman were killed when the vehicles they were travelling in collided at an intersection in Bukit Cabang, Padang Besar last night.

The 9.30pm collision which occurred during a storm, killed Hafiz Johari, 28, his wife, Siti Asmah Abdul Khalid, 27, who was in her full term of pregnancy and scheduled to deliver today. Police officer Muhamad Amirul Naim Aziz, 24, was also killed on the spot.

Head of the Management Department at the Perlis Police Contingent Headquarters, Mohd Nor Marzukee Besar, said the crash involved a Perodua Kancil which was being driven by Muhammad Amirul and a Nissan Murano, with Hafiz at the wheel.

“The police officer was returning home from his in-laws’ house in Padang Besar to Seriab in Kangar with his wife, Ku Noor Shakila Ku Sharudin, 25, and their two daughters, two-year-old Mia Iris Safiya and four-month-old Maa Iris Safiya.

“Mia Iris is in critical condition, while Ku Noor Shakila and Maya Iris sustained minor injuries. They are being treated at Tuanku Fauziah Hospital (HTF),” he told reporters at the Forensic Unit of the hospital in Kangar today.

Mohd Nor said a post-mortem on the deceased would be conducted today and the case was being investigated under Section 41(1) of the Road Transport Act 1987.

In another incident, a teenage motorcyclist was killed when his vehicle crashed into a tree which fell across the road during a storm at Jalan Tandop Kampung Baru Tok Kuning near here, at about 11.45pm yesterday.

Muhammad Kamal died on the spot, while the injured pillion rider was sent to HTF for treatment, he added.

The storm lashed through several villages and residential areas in Perlis at about 10pm yesterday, causing damage to 56 houses.

Operations to clean the roads and houses affected by the fallen trees and branches are being carried out by various agencies, it said.

Checks by Bernama found work in progress, including the removal of an arch which collapsed in Rapoh.

It is learned that the storm also caused damage to several schools and the State Education Department is expected to visit the affected schools today.