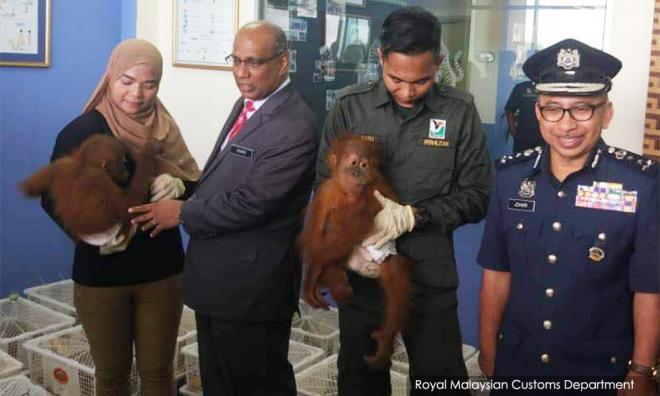 Customs director-general Datuk T. Subromaniam said three Indonesian men including the skipper, aged between 40 and 50 were detained around 12.25am.

In addition, there were 355 sugar gliders which were not prohibited species.

"The success in foiling the smuggling attempt was the result of the Malaysia-Indonesia Customs Coordinated Marine Patrol Operation (Op Patkor Kastima) and Operation Eagle while patrolling the Malaysian/Thai waters," Subromaniam told a press conference at the Kuala Perlis Customs office in Kuala Perlis today.

According to him, the marine troop inspecting the KM Mahligai vessel from Sumatra found 39 boxes which contained the animals.

He said the animals had been handed over the to Perlis Wildlife Department (Perhilitan) for further action and the case would be investigated under Section 135 of the Customs Act 1967 and Act 716 of the Wildlife Conservation Act 2010.

“Both the baby orangutans were traumatised probably after the three-day journey from Sumatra,” he said adding that a syndicate could be behind the smuggling activities.