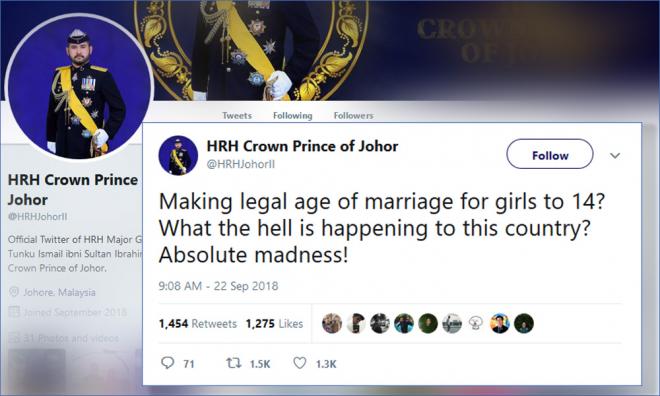 "Making the legal age of marriage for girls 14? What the hell is happening to this country? Absolute madness," he said in a posting on his Twitter today.

Tunku Ismail was referring to a suggestion made by Sabah mufti Bungsu @ Aziz Jaafar yesterday, who mooted bringing down the legal age for marriage to 14 and 16 for girls and boys respectively, in accordance to syariah law.

"The reason why they are allowed to get married early is because some of these children can already be considered mature," he was reported as saying.

Putrajaya has said that it is planning to raise the marriageable age to 18, after several cases of child marriage made headlines in the country in recent months.

In his Twitter post, Tunku Ismail also said that he believes the issue will be brought up to the Conference of Rulers to be discussed.

At present, non-Muslims can be legally married at age 18, but require parental consent if they are under 21 years of age, with exceptions provided only to those who have obtained approval from the state menteri besar or chief minister.

For Muslims, the marriageable is 18 and 16 for boys and girls respectively, with exceptions provided only to those who have obtained the consent of a Syariah Court judge.

'Not everything is about sex'

Meanwhile, deputy minister in the Prime Minister's Department for religious affairs Fuziah Salleh said that she regrets the suggestion made by the Sabah mufti.

Girls who are 14 years old are not physically ready to bear children, she stressed, pointing out that forcing them to do so would cause further issues later on.

Young girls and boys should be in school gaining knowledge for the sake of their future, she added.

"The legal marriage age limit should not be lowered at all. In life, not everything is about sex."