PD POLLS | LIVE | The Port Dickson by-election, which kicks off with nominations today, was triggered when its incumbent MP Danyal Balagopal Abdullah vacated the seat to make way for PKR leader Anwar Ibrahim's return to parliament.

Earlier, Umno had announced that they were boycotting the by-election - which its president Ahmad Zahid Hamidi described as wasteful - fuelling concerns that Anwar may be given a free win.

If Anwar were to win this by-election, it would pave the way for him to succeed Dr Mahathir Mohamad as the prime minister as promised in the Harapan manifesto.

This will be Anwar’s first time to contest a parliament seat outside of Penang, where he had held the Permatang Pauh constituency for six terms. Permatang Pauh was won his daughter, Nurul Izzah, at this year’s general election.

Malaysiakini will bring live reports of the nomination process this morning in what is expected to be a very crowded by-election.

1pm: Thank you for following our live updates of the nomination process for the Port Dickson by-election. This thread is now closed.

11.00am, Port Dickson Municipal Council: Independent candidate A Rajendra (centre in photo) has been disqualified, leaving seven in the race for the PD seat. 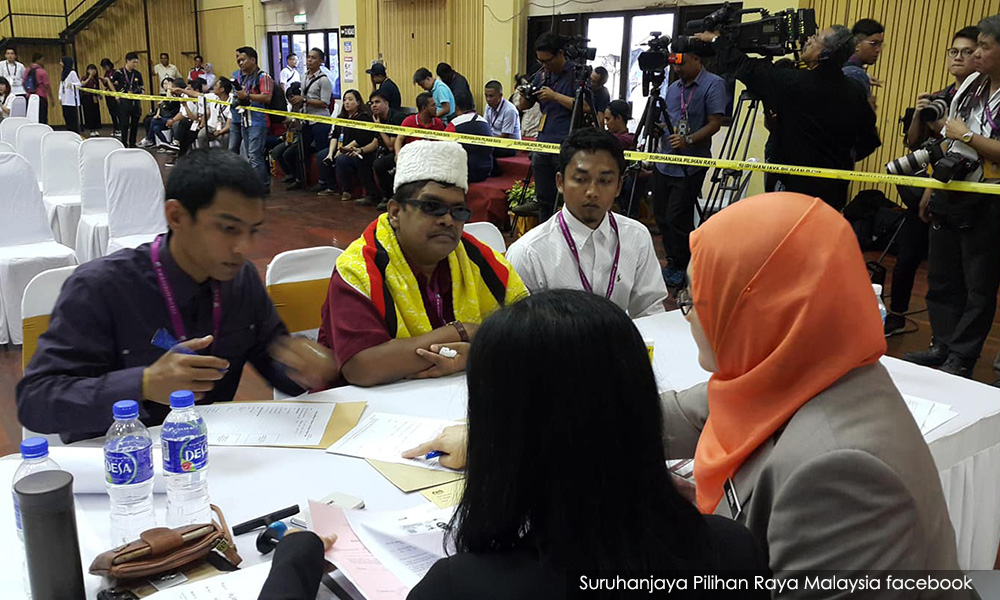 10.30am, Port Dickson Municipal Council: The nomination process for the Port Dickson by-election ended at 10am. A total of eight candidates have submitted their papers.

The announcement on the closing of nominations was made by returning officer Khairy Maamor. 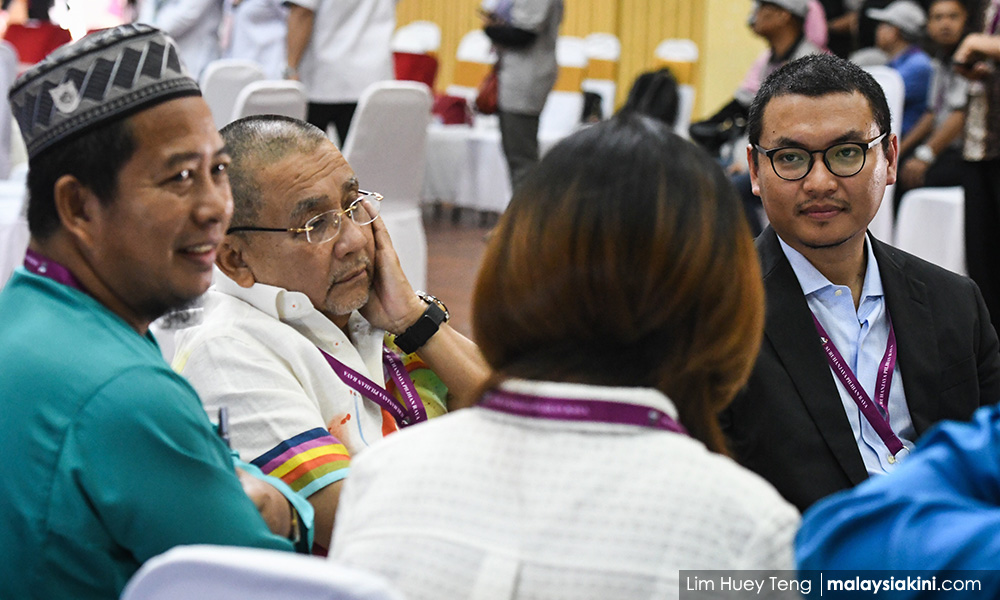 9.45am, Port Dickson Municipal Council: Seven candidates have submitted their nomination papers for the Oct 13 by-election. Nomination ends at 10am.

9.35am, Port Dickson Municipal Council: As Anwar walks towards his seat after submitting his nomination form, Saiful stands up to greet him. The two shake hands.

Later, Saiful submits his papers and joins independent candidates Isa Samad and Stevie whereas Anwar is seated at a different table. 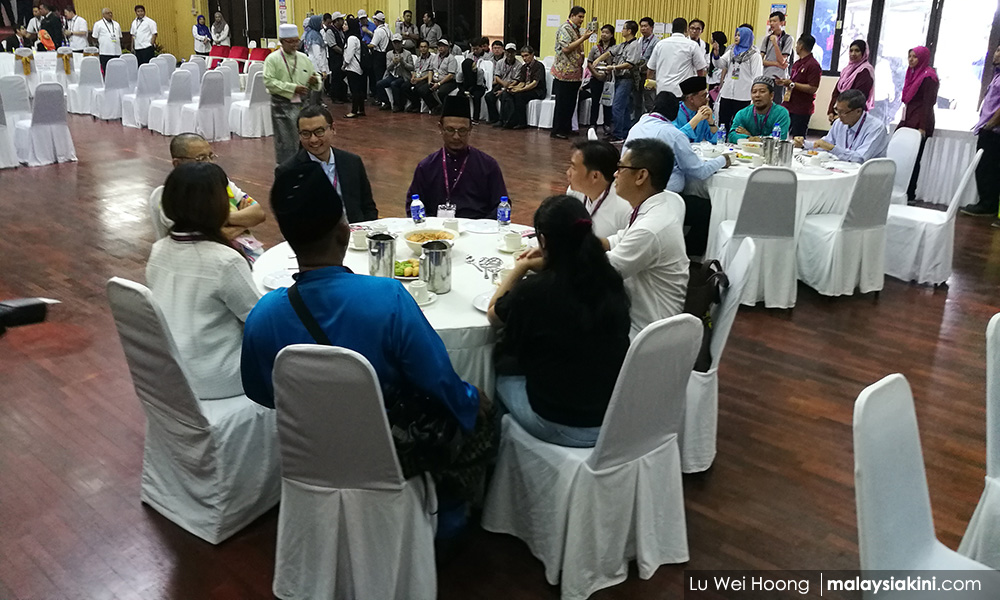 Police officer Mohd Adreen Abdullah says they will use their equipment to jam the frequency of the drone.

"So far, no drone has been detected," he tells reporters.

9.10am: Former Umno minister Zainuddin Maidin tweets that when someone as “weak” as Saiful is willing to challenge Anwar in PD, it is a blow to Umno's dignity for not fielding a candidate.

He says this is because Umno is hoping for “sympathy” from Anwar when he becomes the prime minister.

Saiful arrives at the nomination centre

The situation remains peaceful despite Saiful sitting next to Anwar's team.

He reiterates that his decision to contest is not about a personal vendetta against Anwar but that he wants to be an MP.

Anwar was previously convicted of sodomising Saiful. The PKR president-elect claims the charge was fabricated by his political rivals. 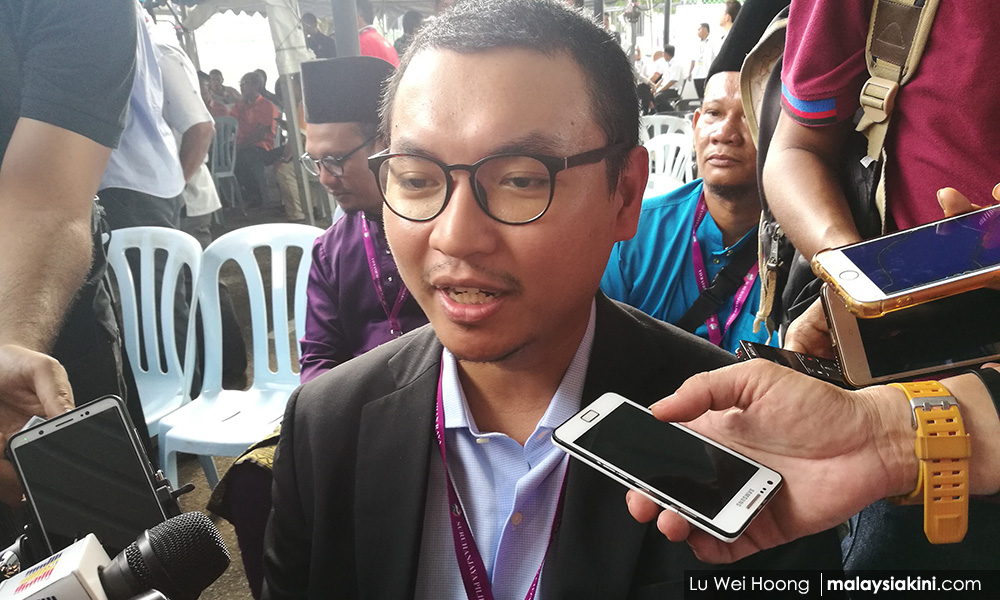 Anwar's supporters are seen pushing forward to the gate as 10 police officers bar their way. A supporter cries out, "candidate (Anwar) is here."

Several reporters bearing the Election Commission tags are stuck outside too. 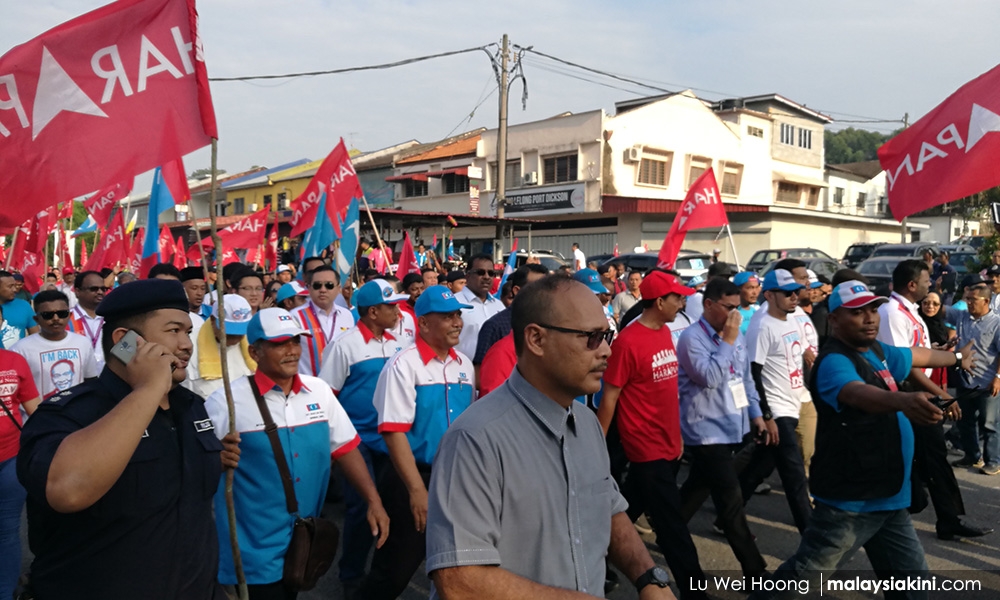 9.00am, Port Dickson Municipal Council: Compared to the Harapan's crowd which exceeds 1,000, there are only about 150 people gathering on the other side of the nomination centre on behalf of PAS. They are clad in the party's signature green. 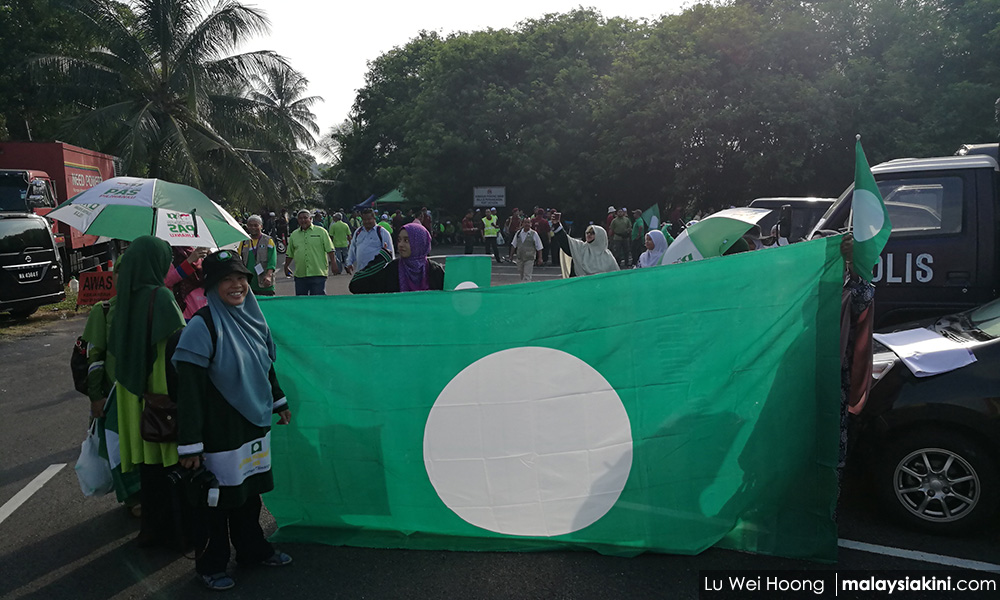 Meanwhile, several supporters of former Negeri Sembilan Menteri Besar Isa Samad are holding up banners for him. They are wearing purple, the official theme colour for Isa Samad. 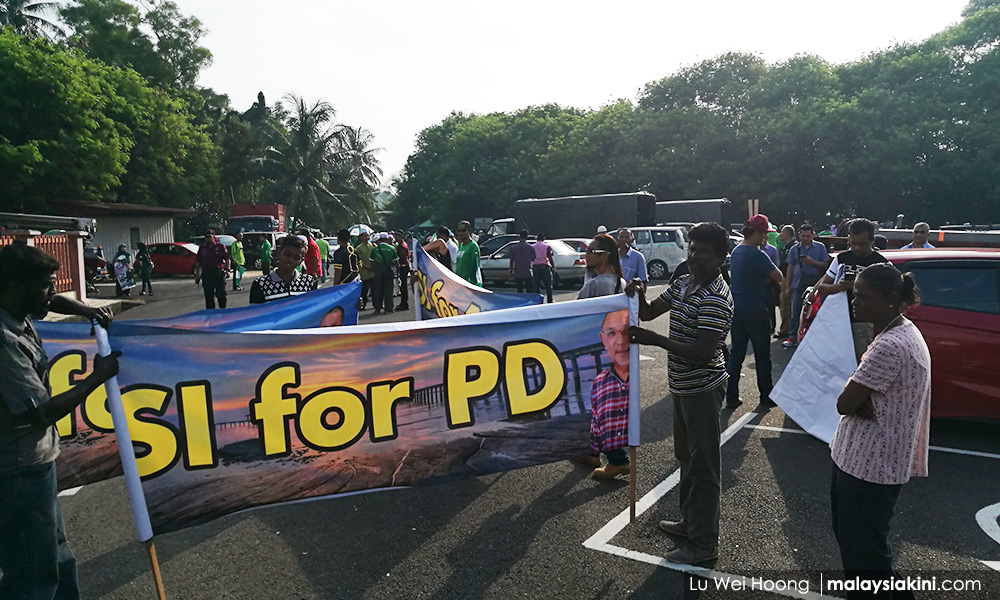 8.45am, Port Dickson Municipal Council: Anwar's arrival is heralded by chants of reformasi from supporters present at the venue.

As the entourage marches towards the building, there is a parade of lion dances in various colours.

Earlier, independent candidate Stevie Chan arrived with a group of about 20 people, some of whom were carrying the Malaysian flag.

8.45am, Port Dickson Municipal Council: Some 1,000 Pakatan Harapan supporters march towards the nomination centre, chanting reformasi and banging on drums. 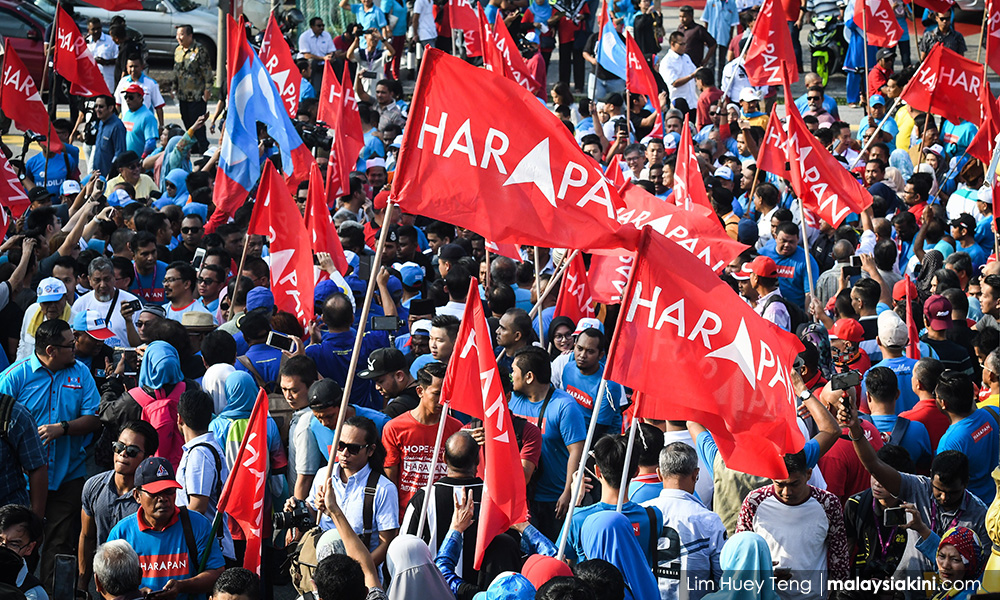 8.15am, Port Dickson Municipal Council: PKR supporters outnumber the rest with some 300 present at the nomination centre. PKR deputy president Azmin Ali and Selangor Menteri Besar Amirudin Shaari are among the party leaders at the venue. 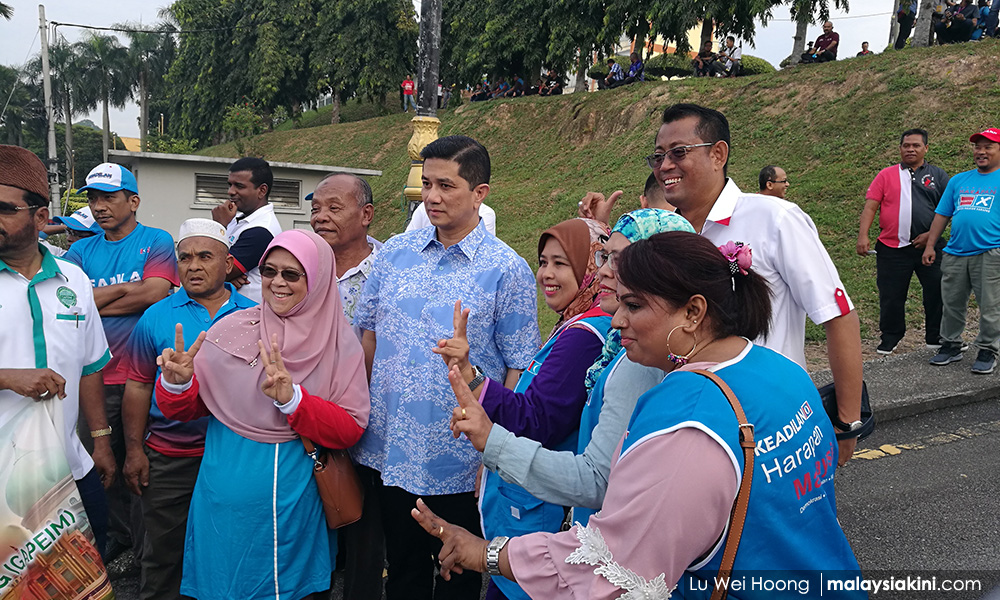 8.10am, Petron station, Jalan Pantai: Some 30 PSM supporters are protesting across the road from the Port Dickson Municipal Council, which serves as the nomination centre.

They are holding placards demanding for an increase in the minimum wage and distributing flyers to passers-by.

“We want the focus of this by-election to be on people's issues.

“We are taking this opportunity to push for the issue of minimum wage,” PSM central committee member S Arutchelvan tells Malaysiakini. 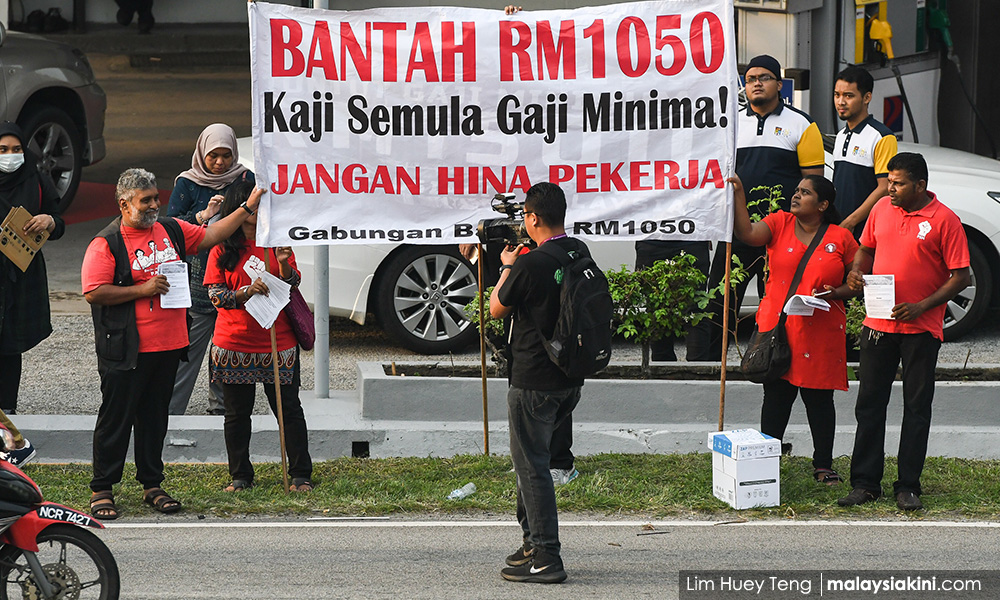 A group of PKR Wanita members approach them for some friendly banter.

“Make sure (Pakatan Harapan candidate) Anwar Ibrahim wins, then we can raise the minimum wage,” quips one of the members.