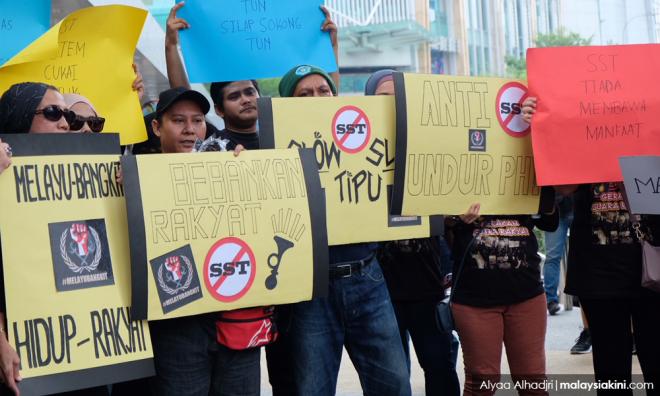 Yoursay: Only visible change in Umno is they're now the opposition

YOURSAY | 'Their campaign focus is always on outdated, extremist racial and religious bigotry.'

Just A Malaysian: Umno is like a substance addict. After being weaned of the gravy train, they are suffering serious withdrawal syndrome. Its immediate and desperate need is to get back into power by hook or by crook, and in the shortest time possible.

What we see now are people like Umno supreme council member Lokman Noor Adam and secretary-general Annuar Musa playing the '3R' (race, religion and royalty) to the hilt.

We see a desperate and chaotic attempt to get the next fix. It is a tragic comedy.

Observer123: So now Umno wants to change? Had BN won the last election, would Umno want to change? There would still be more corruption in Umno.

Now that BN had been defeated, many prominent Umno leaders are facing the prospect of jail.

To be fair, all corrupt Umno leaders should be arrested and charged before any so-called change can be accepted by the people, who had suffered so much under the previous corrupt BN-led government.

Hmmmmmmmm: There won't be change in Umno until your leaders all change... into those orange MACC outfits.

Anonymous #33227154: What Rembau MP Khairy Jamaluddin says of Umno is unlikely to be true.

So far, Umno has not carried out any reform or been a good opposition party. Instead, Umno is seeking the easy way out by seeking an alliance with PKR or Bersatu.

Umno is just hoping to get back to the source of money to continue with their corrupt ways, which is the only thing Umno seems to be able do, and do best.

Cyclonus: Maybe Umno can be a good opposition. And that's what I sincerely hope. But never more should you lead Malaysia.

To truly reinvent yourselves, you'll need to purge all the living dead who walk in the Umno halls; those old stubborn dregs who refuse to resign and give up their old ways.

As long as they breathe in your midst, the stench of the old Umno will trigger all those bad memories of Malaysia under their regime.

Asitis: "If judged by popular vote, however, Khairy said the former deputy prime minister had only garnered about 37,000 votes, compared to Khairy's 32,000 votes and Tengku Razaleigh Hamzah’s 20,000."

In other words, Khairy's decision to contest the presidency caused a split in the votes among the pro-reform faction in Umno.

If not for him, Gua Musang MP Tengku Razaleigh Hamzah could have assumed presidency of Umno, instead of the lame opportunist Zahid.

Anonymous_5a309591: Khairy, the day your party embraces diversity, cultural differences and fight corruption in this country, then it can be considered as reformed.

Believe me, it is a tall order because Umno leaders know no shame.

A shadow cabinet of all the corrupt deadwood leaders. Their campaigning focus is always on outdated, extremist racial ideas and religious bigotry. And you expect them to change?

Mano: The whole rotten reason Zahid and the crooks in Umno want to have unity government with Pakatan Harapan parties is "because we don’t want to be the opposition".

If any Harapan parties take these Umno leaders in, the rakyat will turn against Harapan and they would lose all credibility.

So just change, and be the force the rakyat want you to be, as a strong, credible opposition party. It is not only money and positions that make a credible opposition. What do you think DAP had/has that ordinary Malaysians are willing to hand over money to them when donations are called?

Whereas for Umno-BN, you were always leeching off the public coffers. Then you talk of ‘agama’ (religion) and ‘bangsa’ (race).

Those right-thinking Malays and the truly religious ones must be so ashamed of you talking about defending religion and race, when actually the image of Malays and of Islam has been severely tarnished by the Umno crooks.

Please change, truly change - your only motto for political life should be service, service and service, and nothing else. If this is not palatable, then get lost.

I'm Watching You: Khairy, Prime Minister Dr Mahathir Mohamad just put it succinctly: "There is no future for Umno anymore, because the people detest Umno."

So don't waste your energy, Khairy. Move on.

Dizzer: Look at the big picture, folks. And let's not shoot for the sky. Khairy is about as liberal and bright as you're going to get in Umno, and represents one of the few hopes of turning the party into a modern Malay-based opposition.

The alternative - the venal racism of Umno combined with the medievalism of PAS - is a very dangerous outcome for everyone.