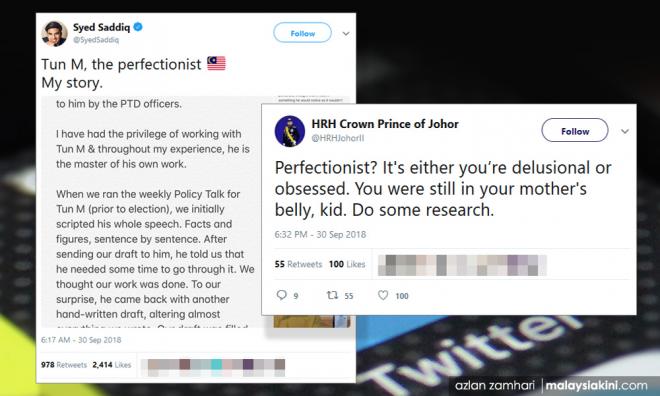 'You were still in your mother's belly, kid'

A critical tweet by Johor Crown Prince Tunku Ismail Sultan Ibrahim earlier today has raised questions about who he was aiming his jab at.

“Perfectionist? It’s either you’re delusional or obsessed. You were still in your mother’s belly, kid. Do some research,” wrote Tunku Ismail.

Perfectionist? It's either you’re delusional or obsessed. You were still in your mother's belly, kid. Do some research.

While the prince did not mention names, it was aimed at Youth and Sports Minister Syed Saddiq Syed Abdul Rahman, reported news portal Free Malaysia Today.

The young minister had dubbed Prime Minister Dr Mahathir Mohamad as a "perfectionist', in regards to the latter's recent speech at the United Nations (UN) meet.

Tunku Ismail’s seeming reaction to Syed Saddiq’s Twitter post may appear unprovoked, but Syed Saddiq has had a run-in with the Johor palace before.

In 2016, Syed Saddiq wrote an open letter on the Johor ruler’s decree banning street protests in his state.

At the time, Syed Saddiq was a budding opposition politician and it earned him much criticism for challenging the palace.