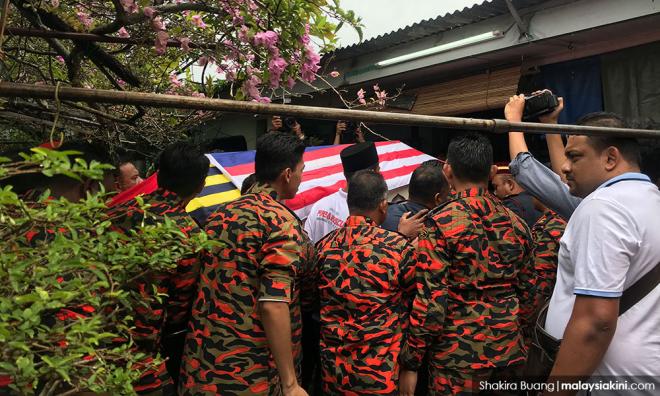 The six fire and rescue personnel who drowned during a search and rescue (SAR) mission for a missing teenager in a disused mining pond in Taman Putra Perdana, Puchong, last night had complied with the stipulated standard operating procedures (SOP).

Although it was dark, the SAR was continued using surface water rescue method as the water was not deep, Fire and Rescue Department (FRD) director-general Mohammad Hamdan Wahid said today.

“Checks by the department found that they had complied with the necessary SOP and strategy. If it was a planned task, we could call it off, but the task involved a search for a human.

“(In such a situation) if the condition allows, we carry on, every at night,” he told reporters after the funeral prayers for the six firefighters, who were from the department’s Water Rescue Unit (PPDA), at the Section 15 Fire and Rescue Station.

Mohammad Hamdan said the department would review the SOP, with the view of improving it, to prevent a similar incident.

He said preliminary investigation at the scene showed that the pond was a floodgate and not suitable for recreational activities.

“There is a waterfall and at the foot of the waterfall was where the SAR was conducted. When they (the Fire and Rescue personnel) went towards the waterfall, the undercurrent was strong and there are also rocks placed there as water breakers.

“We believe they must have stepped on the rocks and because of the strong undercurrent, one of them could have slipped and the others were pulled by him as they were using human chain.

“They were in the water for about 10 minutes and cardiopulmonary resuscitation (CPR) was given to them when they were brought up to the surface, but they could not be saved,” Mohammad Hamdan added.

He said an investigation would be carried out on the tragedy.

Their bodies would be sent to their respective hometowns for the funeral.