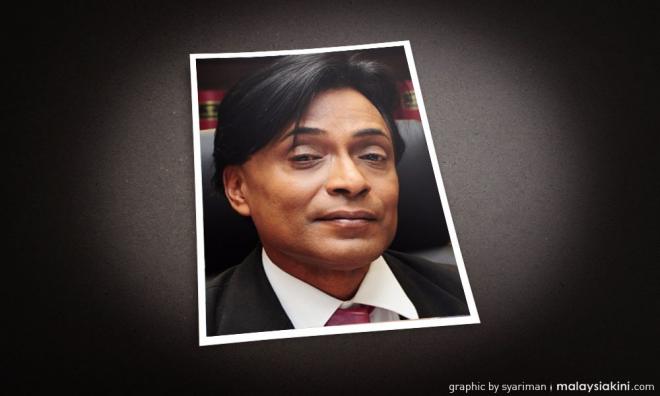 The seventh accused in the murder of Deputy Public Prosecutor (DPP) Anthony Kevin Morais today denied that all the testimony he had given during the defence proceedings in the Kuala Lumpur High Court were lies or made up.

S Ravi Chandaran, 47, who is also the sixth defence witness, disagreed that he was in a "desperate situation” by dragging in a lawyer and former prime minister Najib Razak in the case.

Ravi said this during cross-examination by DPP Wan Shaharuddin Wan Ladin on the 25th day of the defence proceedings today.

Wan Shaharuddin: When (you were) arrested, all the police asked was about this (murder) incident?

Wan Shaharuddin: If you wanted to tell (them) something, this was the earliest chance you had (to tell the real story).

Wan Shaharuddin: Did you reveal everything to the police?

Ravi: No, I did not mention a lot of things.

Wan Shaharuddin: You did not mention a lot of things because the things you said in court were lies and made-up stories.

Wan Shaharuddin: If you're innocent, you had a chance to tell (the police) everything on Sept 15.

Wan Shaharuddin: By everything, I mean the events surrounding the murder of Kevin Morais, the involvement of the lawyer representing the first accused and Najib. You did not reveal this (earlier) because the things you told the court did not happen.

Wan Shaharuddin: You are now desperate to drag just about anyone with you (into the case), for you're actually the mastermind, along with (pathologist) Colonel Dr R Kunaseegaran, in the murder of Kevin Morais, so much so you were willing to implicate lawyers N. Sivananthan and Geethan (Ram Vincent).

The accused also disagreed with Wan Shaharuddin's suggestion that the four other accused R Dinishwaran, AK Thinesh Kumar, M Vishwanath, and S Nimalan were the henchmen of Kunaseegaran and himself.

In a previous proceeding, Ravi admitted that he had lodged a police report claiming that the former prime minister had offered him RM3.5 million through prison officials to plead guilty to killing Kevin Morais.

In the police report, he also claimed that Kevin Morais' brother, Richard, had offered him RM2 million for the same purpose, while in court during his testimony, he said Kunaseegaran had offered him RM1.5 million to plead guilty as well.

Dinishwaran, Thinesh, Vishwanath, Nimalan, Ravi, and Kunaseegaran all pleaded not guilty to the charge of killing Kevin Morais on the way from Jalan Dutamas 1, Sentul to 1 Jalan USJ 1/6D, Subang Jaya, between 7am and 8pm, on Sept 4, 2015, under Section 302 of the Penal Code and read together with Section 34 of the same Act which carries the mandatory death sentence, if convicted.

Dinishwaran, 26, Thinesh, 25, Vishwanath, 28, Nimalan, 25, and Ravi are represented by lawyer V Rajehgopal while Kunaseegaran, 55, is represented by counsel N Sivananthan. The prosecution is led by DPP Saiful Edris Zainuddin.

The trial before Judge Datuk Azman Abdullah continues on Oct 26.