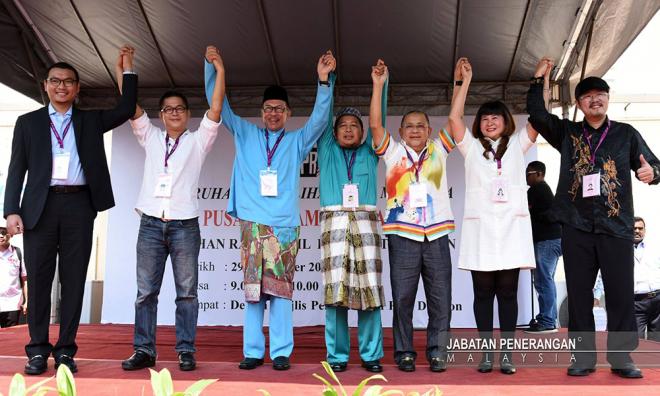 Survey: Anwar to sail to victory, Saiful will sink to the bottom

Less than 48 hours before voters in Port Dickson cast their ballots, a survey has claimed that Anwar Ibrahim is on track to defeat his six opponents in Saturday's by-election.

According to Institute Darul Ehsan (IDE), the PKR president-elect would also secure a higher share of the votes.

However, IDE deputy chairperson Redzuan Othman said in a briefing in Port Dickson this afternoon that the majority remains to be seen as it depends on the turnout.

According to the survey of 1,084 local voters between Oct 8 to 9, 74 percent of the respondents said they would vote for Anwar.

In the last general election, Harapan won the constituency with 58 percent of the votes.

Meanwhile, Redzuan said PAS would likely maintain its 11 percent of the votes.

He said IDE's tracking of PAS found that it mostly campaigned in Malay areas and is not expected to gain more than one percent of non-Malay votes.

Meanwhile, former Umno warlord Mohd Isa Samad, who is running as an independent, is expected to garner 10 percent of the votes in BN's absence.

BN received 30 percent of the votes in the last general election.

Independent candidates Stevie Chan, Lau Seck Yan and Kang Chee Yuen would likely garner one percent of the votes each while another independent candidate, Mohd Saiful Bukhari Azlan, would get zero percent. Another two percent are still undecided.

"We asked more than 1,000 people but failed to get even one who said they will vote for Saiful," he said in reference to Anwar's former aide, who accused the PKR leader of sodomising him.

However, Redzuan said it was possible there would still be someone in the more than 75,000 voters in Port Dickson who would vote for Saiful but none could be found in a smaller sample of slightly more than 1,000.

He said the nomination of Anwar, who is the prime minister-in-waiting, had energised the voter base with 85 percent of those residing locally stating that they planned to vote.

However, Redzuan said the problem lied with a large number of voters who are working outstation.

He revealed that 68 percent of the voters said they have between one or more family members residing outside of Port Dickson, which could hamper the turnout.

According to Redzuan, the top three reasons given by those who were not planning to vote were due to work (24 percent), political fatigue (21 percent) and no suitable candidate (18 percent).

Those who planned to vote cited the top three reasons as Anwar's nomination (40 percent), responsibility as a voter (29 percent) and a new Malaysia (20 percent).