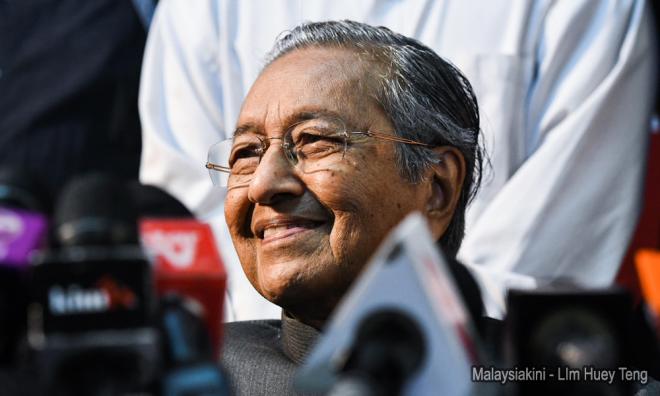 Air of anticipation over Dr M's visit to Thailand

There is an air of anticipation over the forthcoming visit by Prime Minister Dr Mahathir Mohamad to Thailand later this month, especially in bringing the much-needed progress into the 'deadlocked' southern Thai peace talks.

Expert believed the two-day visit by Mahathir to Bangkok on Oct 24 and 25 was vital in breaking the current stalemate plaguing the current peace talks between the Thai government and Mara Patani.

“Mahathir’s visit will be significant to the progress of the peace talks, which has been in a stalemate,” Srisompob Jitpiromsiri, a longtime analyst to conflicts in southern Thailand, told Bernama recently.

The academician at the Prince of Songkla University (PSU) in Pattani said the bilateral visit by the Malaysian leader would be a significant step for both governments, as they collaborate to solve the problems in southern Thailand.

Srisompob, one of the founders of Deep South Watch (DSW), a non-governmental organisation monitoring the conflict, said he believed Mahathir and his new point man to the peace talks, Abdul Rahim Noor, would bring "new proposals" for Bangkok's consideration.

Abdul Rahim, Malaysia’s former inspector-general of police and new facilitator to the peace talks, is a man with "wide experience in the dialogue process in southern Thai" and is expected to be among Kuala Lumpur's entourage to Bangkok later this month, he said.

Malaysia has been facilitating the southern Thai peace process since late 2014, arranging several rounds of talks between delegations from the Thai government and MARA Patani.

Thailand, on its part, is also on the verge of appointing a new lead negotiator to replace General Aksara Kerdphol, with former Army Fourth Region commander General Udomchai Thammasarorath set to be officially named to take over the post next week.

One of the "new proposals" under consideration and could be presented during the visit would be the inclusion of new "groups or factions" to MARA Patani, which, if implemented, would make the peace talks more inclusive and substantive than ever before.

The inclusion of new parties to MARA Patani could potentially include the military wing of Barisan Revolusi Nasional (BRN) and different faction in PULO (Pattani United Liberation Organisation), which were not included during the current peace talks.

The participation of military wing of BRN and PULO in MARA Patani, if true, would be good and positive to the peace talks, said Srisompob, adding that the inclusion of the "new groups" would make the peace process more stable and effective.

The inclusion of BRN's military wing would also be significant to the peace talks as the shadowy but most well-armed and influential group in southern Thailand had been blamed for much of the violence in the deep south.

Its exclusion in the current MARA Patani-led negotiation with the Thai government had been cited as one of prime reason for the talks' snail-pace progress and eventual "stalemate", especially regarding the implementation of the safety zone.

The addition of BRN's military wing and other groups, according to the academician, would also push the peace talks to enter its most important phase - discussing the "core issues" of the conflict, including the group's demand for southern autonomy.

Srisompob said the Thai sides had been trying to evade from discussing the issues, but the “inevitable has come”.

“The issues of southern Thai autonomy or decentralisation as demanded by the groups might be difficult for the Thai side (to discuss).

“It might be a bitter pill for the Thai side to swallow, but it is inevitable (for both sides to discuss),” said Srisompob.

Between 6,500 and 7,000 lives have been lost due to the armed conflict in southern Thailand since 2004, according to DSW, which constantly monitors the conflict.