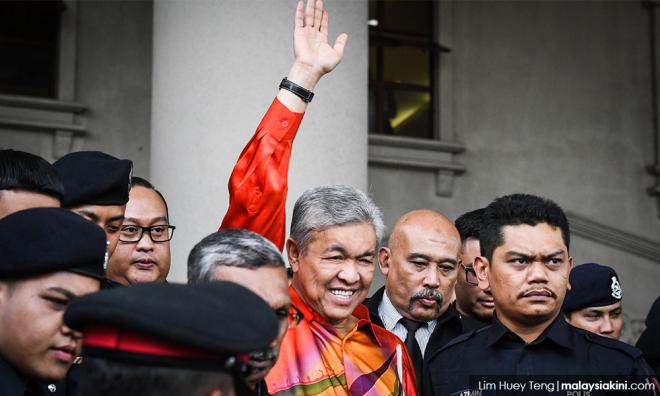 Umno president Ahmad Zahid Hamidi is sticking to his guns in giving no indication that he will be taking leave from his position pending his trial on 45 charges of criminal breach of trust, money laundering and accepting gratification.

Taking to Twitter, he said he welcomes the views of Umno Youth which yesterday advised him to go on leave.

"I celebrate differences of opinion. However, what is important is for us to move together to fight the enemy that wants to destroy Umno," Zahid tweeted using the hashtags #prayforumno and #umnobangkit.

Ahmad argued that the charges against Zahid were politically-motivated and the latter had not been proven guilty.

He added that the president will not be in court every day and that taking leave was only a procedure when Umno was in government.

Last week, the Umno president was slapped with 45 charges including for receiving RM21.25 million in gratification as home minister.

In light of the charges, Umno Youth yesterday agreed to urge Zahid to take leave and focus on his court case and clearing his name.

In making the call to Zahid, Umno Youth chief Asyraf Wajdi Dusuki said that taking leaving was not an admission of guilt.