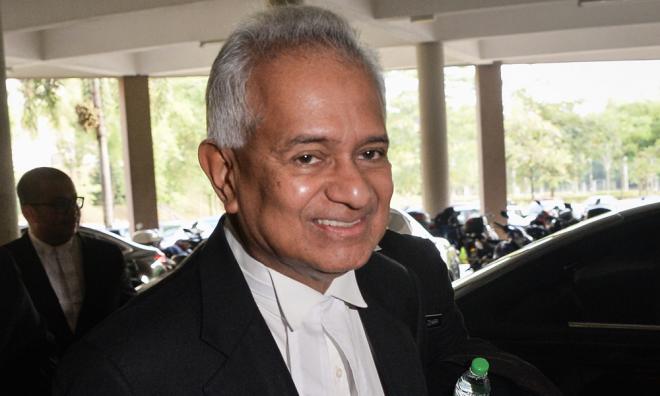 The government will at the London High Court today file for an order to set aside a consent award that was recorded by an arbitration tribunal on May 9 last year between the International Petroleum Investment Company (IPIC) and Aabar Investments PJS as claimants and 1MDB and the Minister of Finance Inc (MOF Inc) as respondents.

Under the consent award, Malaysia is to pay US$5.78 billion to IPIC and the bond trustee over a five-year period, a sum which attorney-general Tommy Thomas described as obtained through fraudulent means.

"The basis of Malaysia’s legal challenge in the High Court of London is that the award was procured by fraud or in a manner contrary to public policy.

"The court application relates to the knowledge of IPIC and Aabar of the serious allegations made by the US Department of Justice (DOJ) against the former prime minister and finance minister Najib Abdul Razak, who was also the moving spirit and ultimate decision-maker in 1MDB.

"Such knowledge on their part was acquired, inter alia, no later than the time when the DOJ’s press conference was held by the US attorney-general, Loretta Lynch, in July 2016 when she announced the filing by DOJ of several civil suits for the freezing of assets purchased by fraudsters from stolen proceeds and popularly described as the greatest kleptocracy in modern history," Thomas said in a statement today.

The detailed allegations in those DOJ court documents, he said, were given global publicity, particularly in the political and business media.

"They had certainly entered the global public domain by July 2016. Najib is identified as 'MO1' in the DOJ pleadings. Any reasonable reader reading these court documents would immediately become aware of his central role in defrauding 1MDB to the benefit of himself, his stepson and Jho Low," he said

Thomas said of the US$5.78 billion, US$1.46 billion has been paid, leaving a balance of US$4.32 billion with the next interest payment of US$50million due on Nov 11 this year.

He added that similar interest payments were payable periodically until April 2022 when the final bullet payments, representing principal and interest of US$1.8 billion each, were due and payable in May and October 2022.

Thomas said as a result of this, the challenge to the consent award would be filed later today.

"Malaysia will claim that as a result of the fraud, we are relieved from any obligation to pay the balance of the US$4.32 billion to IPIC or Aabar under the consent award and additionally have a right to recover the US$1.46 billion already paid," he said.

"In such circumstances, Malaysia takes the position that IPIC and Aabar were aware of the fraud of Najib Razak.

"He was principally responsible for 1MDB and Minister of Finance Inc consenting to the award. Every system of law would hold that he could not possibly have acted in the best interests of his country and his company.

"Indeed, he did not. Fraud is an established ground to challenge the consent award for public policy reasons," he noted.

In a statement emailed to Reuters, Abu Dhabi state fund Mubadala said it was unaware of any legal bid to challenge the arbitration’s outcome.

Mubadala had merged with IPIC in 2017.

According to Reuters, the fund said that a “legally-binding settlement agreement” which had been agreed to by the parties involved “remains in place”.

It added that 1MDB did not currently owe any debt, either to itself or IPIC.

It was previously reported that Pakatan Harapan-linked Gerakan Anak Muda Tolak Najib (Gant1) had filed a suit against Najib, 1MDB and the government in 2017 to challenge the settlement which they lost at the High Court.

However, when Harapan won the 14th general election, it withdrew its appeal in August at the Federal Court.